12 Free Things to Do in Belfast, Ireland

The Belfast Castle is considered as one of the most famous landmarks in Belfast, Ireland. The very first Belfast Castle was built by the Normans in the latter part of 12th century. The second castle was built, on the same site, in 1611 by Sir Arthur Chichester. However, the castle was burned down after almost a hundred years. In 1862, the clan of Chichester decided to build a new castle on the side of the Cave Hill. Cave Hill is an area somewhere in the Northern portion of Belfast. The place contains natural resources and archaeological features. The castle offers wonderful garden views with restaurants and antique shops inside. Important private events are commonly held in the castle as well.

Did you know that people believed that Cavehill has been the inspiration of author Jonathan Swift his Gulliver’s Travels novel?

The Titanic Memorial Garden built outside the famous Belfast City Hall to commemorate the lost lives in the sinking of the RMS Titanic. The tragic event happened in the North Atlantic Ocean, four days after the maiden voyage of the ship.

The figures are sculpted out of Carrara marble, a high-quality type of marble used for sculpture. The sculpture consists of a female personification of death holding a black laurel wreath above the head of a dead seafarer together with two mermaids. The plaques contain all the names of those who perished on RMS Titanic in the early morning of April 15, 1912.

Botanic Garden was established by the Belfast Botanic and Horticulture Society. The garden is the home of the restored Palm House and Tropical Ravine. The Palm House was designed by Sir Charles Lanyon, an English Architect of the 19th century. The house contains a variety of birds, hanging baskets, seasonal display, and tropical plants. The Tropical Ravine was built by Charles McKimm, a park’s head gardener. The place contains some of the oldest seed plants of today.

Cultúrlann McAdam Ó Fiaich is a Cultural Centre which offers a varied programme of the Irish language. It is located on the Falls Road, Belfast, Ireland. Found in the place are the art gallery, bookshop, offices, and restaurants.

Dome at Victoria Square is a high rise building above the Belfast’s skyline with a 360 degrees view across the entire city. It offers a stunning shopping destination. This stunning tour normally runs each day from 10 am to 4 pm.

Linen Hall Library is the city’s oldest library founded in the year 1788. The library is renowned for its Irish and Local Studies collections. It houses one of the books of CS Lewis, a British novelist.

PRONI is the official archive for Northern Ireland. It allows the visitors to make their own research about local and family history. Visitors may also enjoy their events, exhibitions or talks.

Queen’s University Belfast is an internationally renowned public research university in Belfast, Ireland. It became a member of the leading research-intensive universities group, the Russell. QUB has been included among the top 1% of universities worldwide which offers various levels of academic degrees and different courses.

St. George’s Market is the only surviving Victorian market in Belfast, Ireland. The market was open as a meat market and a slaughterhouse in 1890. The structure was made of red brick with sandstone and Roman styled arches with both Irish and Latin inscriptions on it. The building was designed by a city surveyor named JC Bretland.

Ulster Museum is an interactive museum which bring art collections, history and science into life. Things to see in the museum are as follows:

The War Memorial Gallery exhibits interesting books and displays of Northern Ireland during the WWII. The gallery is located beside the Belfast Cathedral. There’s audio-visual show on the home front with life-size dioramas. Moreover, a Belfast blitz memorial was built out of a large bronze by the sculptor John Sherlock. The statue represents a mother and child fleeing the Belfast Blitz. 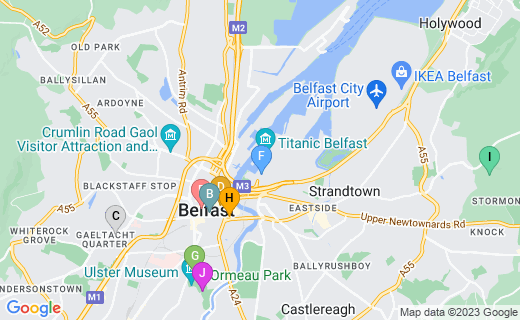 It is a famous landmark in Northern Ireland.

Memorial for those who died in Titanic tragic.

The cultural centre of Belfast.

The oldest library in Belfast.

Home of the official archive of Northern, Ireland.

One of the leading public research university.

The office of the Northern Ireland Assembly.

It is a part of Belfast's Horticulture Society.