1. Belize has only two seasons - the wet/rainy and dry. The rainy season usually lasts from June to November. Hurricanes are anticipated during this time but have not been an issue for the past few years. The dry season lasts from December to May.

2. Belize is home to one of the richest Mayan history sites in the world with over 900 sites unearthed. Caracol is the tallest Maya site in Belize, followed by Xunantunich.

4. Belize has the only known jaguar Preserve in the world - Cockscomb Basin Wildlife Sanctuary. Aside from Jaguars, visitors to the sanctuary can see other exotic animals like the Tapir, Deer and other wild cats along with hundreds of exotic plants, birds, reptiles and amphibians.

5. Gibnut is considered a delicacy in Belize. Gibnut (officially the Agouti Paca; llocally the Royal Rat) is nocturnal rodent and one of the most prized game animals in Belize. Gibnut got locally dubbed the "Royal Rat" because it was eaten by Queen Elizabeth II on her visit to Belize.

6. Belize is a very small country spanning only 180 miles long and 68 miles wide covering only 8,867 square miles. Despite its small size, Belize's population is very dense with about 340,000 people. 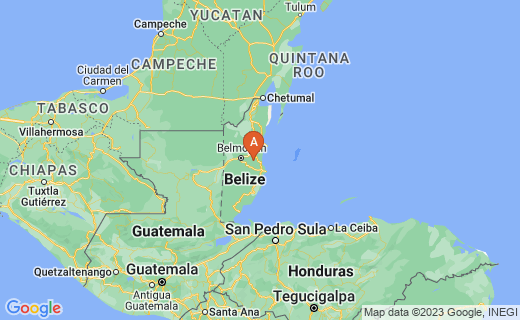 Have you ever been to Belize?

How was your visit to Belize?

7. Belizean superstition states that there shouldn't be any swimming on Good Friday because it brings bad luck. You can often hear parents warning kids of turning into a fish for being in the water after 12 PM.

8. Belize has over 500 species of birds! The Keel-Billed Toucan is the national bird of Belize.

9. There are over 400 species of tropical fish living in Belize's barrier reef. The barrier reef is the largest in the Western Hemisphere.

10. Belize is the only English-speaking country in Central America. All the other countries speak Spanish.

12. The national dish of Belize is Rice and Beans, Chicken and Salad, affectionately referred to as 1-2-3. It is traditionally made out of white rice mixed with red kidney beans, stewed chicken and potato salad. This dish is often served with fried ripened plantains on the side. It can be found at almost any restaurant everyday in Belize.

13. There's no Burger King, Pizza Hut, KFC or any fast food chains for that matter in Belize. The most popular "fast food" in Belize is fried chicken from the neighborhood Chinese restaurants. However, you can find pretty good pizza, burgers and other familiar "fast food" options in local restaurants.

14. Belize was formerly a British Colony before it got its independence in 1981. Belize was then known as British Honduras until September 21, 1981.

15. Belize doesn't snow. Having a sub-tropical climate allows Belizeans to enjoy an average yearly temperature of about 79 degrees F with only 125 days of rain per year.