8 things to know about Salem, The Witch City

Salem is steeped in history as one of the first colonies in New England that formed the structure of the USA. Renowned for the witchcraft atrocities in 1692, it is now a bustling tourist city, especially during October when Haunted Happenings—a month of events with a fairground and additional street vendors takes over the city. Essex Street is lined with psychic shops, Salem memorabilia as staff in costume parade the street offering tours and readings as you wander down the cobbled streets.

From sitting on the wharf reading a book or walking the streets that have remained the same since some of the first settlers arrived over 350 years ago, Salem has more to offer than being the location of the most notorious injustices’ society has served to its citizens. There are a few things to know if you are heading out for a weekend, a day trip or an extended stay to make the most of your visit that can save you time and money. I have lived in Salem on and off, having survived the humid summer and the nor'easters during the winter—always check the weather, as Salem closes down if the weather is bad and wear a pair of comfortable walking shoes!

1. Don’t drive unless you have to. Salem is well located on the North Shore with trains from North Station in Boston on the Newburyport and Rockport lines. The times are irregular, so do check, alternatively there are several buses that run from Boston to Salem, (459 and 450 which can take as little as 40 minutes). Both stop in the town center. Many streets need permits and parking isn’t only expensive, but traffic does build up as the area has become popular for commuters in to Boston. If there are several of you a flat fare taxi may be more economical, and there is a flat fare (about $5.50) to go anyway around the city. Salem is easy to walk around, follow the red line on the sidewalk and you know you are in the tourist hub. Be warned traffic is bad and don’t drive during Halloween as the roads are closed. Another option is the Salem Ferry that runs during the tourist season, but the last one departs early in the evening and the dock is a little outside the main tourist hub. 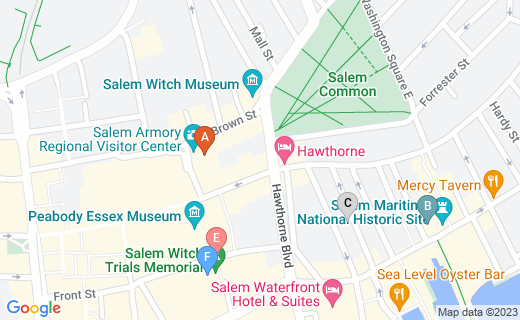 2. Visit the National Park Service Visitor Center, on New Liberty Street at the end of Essex and opposite the Peabody Essex Museum.Here you will find numerous maps and guides as well as individual flyers (often with discounts) for the attractions and also for the surrounding area. There are some well documented historical facts of the area and photos on display, including a facsimile of Bridget Bishop’s death warrant and information of the winners of the Salem Award for Human Rights and Social Justice. There are public restrooms here and by the Friendship (ship) at Derby Wharf, which are the official ones in Salem. In addition, it is well air conditioned during the humid months and a good place to get your bearings without any sales pressure. Book a free tour of Custom House or the Friendship here, since the budget cuts they are now limited during peak hours only or on request if a ranger is available. To keep this service going, donations are gratefully received.

3. There are limited fast food establishments in the main hub, most are a little way out. For those who want to buy a sandwich or grab a bite to takeout, currently the choice is limited, but places open and close quickly. You can grab a hot dog on Washington, donuts on Derby or Washington and there are a few taco places (the one on Essex is good value). Many people opt to stock up on refreshments in the local CVS in the center of Essex, not because the restaurants aren’t good, but if you are there for the day you don’t have that much time to wait to get a table then served and there is so much to see and do! There is also a 7-Eleven on Norman, which can be handy for emergency supplies, especially late at night as many places close by 10.30 p.m.

Watch the tour guides in action

4. Visit the Old Burying Point and the Salem Witch Trials Memorial. One of my favorite places and you don’t need to be on a guided tour. The cemetery has two entrances, the main on Charter and a small gate on Liberty. Don’t worry, you can’t get locked in as the wall surrounding it is only a couple of feet in height and many people go on evening ghost tours and visit. Here lie some of the renowned and infamous Salem residents and the first families to settle in New England. The Witch Trial memorial is adjacent with 20 benches etched with each victims name and date. A brief history board is poorly located directly opposite, outlining how Salem today, is attempting to make amends with the Salem Award for Human Rights and Social Justice. The foundation serves to remind society of the suffering injustice causes and that continues today.

5. Get your fortune read. There are numerous psychics offering readings and you will see their profiles on boards and in the shop fronts. All psychics have to have a license, but that does not mean to say they are gifted. If you choose to have a reading there are several types, those who favor the angelic realm and those who use witchcraft, either way take it with a pinch of salt. You can have a 15 minute reading or longer ones up to an hour. Most people dress to look the part in Salem and some even do the readings in the shop windows. A reading should be done in private and many places have consultation rooms, just ask! There is a psychic fair during October, which is a hall with tables and psychics that offer a variety of readings, but there is no private area, so bear that in mind and go to a shop if you want privacy. Usually it is the same price and most are affiliated with a shop. Salem is small, all the psychics and tour guides know each other and have worked for one shop or another.

Derby Wharf and the Friendship

6. Hold on to your ticket stub, many businesses piggyback each other and your ticket may give you discounts in Cinema Salem, a reading or another tour. There are numerous types of tours and many will sell you tickets in the street. It depends on what you are interested in and how much time and walking you wish to do, so ask the questions before parting with any money. There are witch, ghost, trolley or history tours to choose from. All the guides have to take an annual test and have a license to make sure they know the facts of Salem. A tour is useful if you have time constraints and many will offer group deals or discounts in conjunction with another venue, especially the museums. Look in the visitor center for flyers with discounts and observe some of the guides in action around town. Often you can’t miss them, wearing elaborate costumes and microphones!

7. Visit Nathaniel Hawthorne’s place of birth. He was born on Herbert Street, the back of Union Street near Derby Wharf; walk the streets and see the view he had whilst he worked at the Custom House and where he got his inspiration from. Hawthorne had an interest in the supernatural, which comes across in his novels. You can find a self-guided tour to download from the visitor center. The House of Seven Gables is nearby at the end of Derby Street and his statue stands in the middle of Hawthorne Boulevard. He was forced to leave Salem (due to politics) and his remains are in Concord, Massachusetts, but his soul remains in Salem and Maine.

Salem has several vintage shops, plenty of places to hire costumes or buy costumes. You can stock up on crystals and tarot decks, charms and potions. The two main shopping areas of Essex Street and Pickering Wharf both contain stores as well as all the museum shops.

Look out for discount coupons in the Visitor Center.

8. The Salem Library has free Wi-Fi on 370 Essex. Those without a laptop can get free guest access for 20 minutes at reception. The library is open every day and is a good place to get information if the visitor center is closed. They have train and bus timetables upstairs as well as a printing facility. They have a range of newspapers and magazines and a notice board for local events. If you are interested in the history of Salem, it has a historical reference room with books from the 18th and 19th century that everyone can access. Wi-Fi is also usually available in most coffee shops, but some places if busy they can limit your use and will ask you to leave and they are not shy about it.

Salem has the same issues of homelessness and drug abuse that you can find in many towns. Lifebridge houses the homeless near the police station, though some still prefer to sleep on the benches in the Common. Out of season, the city is sedate as shops close for the season or open only at weekends for the tourists. The tour guides find alternative work until the season begins again as the Thursday Farmers Market moves indoors. The city has still much to do, to balance what is right for the people of Salem against the commercial profit gained from the draw of the Witch Trials. Hopefully each person who visits is reminded of the sacrifice of the victims that helped change the justice system in America. However, the scales of justice remain unbalanced to this day.