In our town of Little Rock Arkansas, we are honored to house The William J.Clinton Presidential Library. The Library can be seen from the I-30 Interstate at the the Little Rock Downtown Area exit.

At the end of a giant "green" corridor, nestled on the bank of the Arkansas River, sits the Library. It is a beautiful place to come, walk for exercise, picnic or just look at the beauty of architecture and nature.

Next to the Library is a Historic Building; the 1899 Choctaw Station Railroad passenger Depot - a Preservationist nightmare occurred with the speedy demolition of the Train Station. We are lucky they saw the value of the depot, and restored it into a beautiful hall and classrooms.

When the Clinton School of Public Service was being built, the cost of tearing down the Old Train Depot and building a new structure was found to be cost prohibitive.

By renovating this beautiful Architecture, it saved on our environment and energy use.

Behind the Library sits the Revitalized Brownfield Property & Headquarters for Heifer International.

Around, About, The Clinton Presidential Library 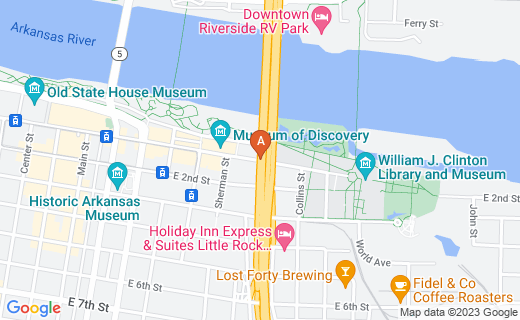 You will find the Clinton Library, and Grounds. Heifer International is right behind these amazing revitalized Brownfields Properties!

The Orientation Theater of the Clinton Library

Hearing these words come from President Clinton, while in the Library Orientation Theater, stirred my heart, and made me happy. It is a feeling of great honor, to live in the town of Little Rock, that houses this unique Library, and because of the work that went into the Clinton Presidential Library, that we can hear this excellent Statesman speak in this setting

The planning of the Clinton Presidential Library and campus, have captured the heart and direction of the River Market Area.

The Clinton Presidential Center, and Clinton School of Public Service (UAMS) are situated in an area that at one time was so toxic that it was on a National Priorities List as a Superfund site.

Partners of the Clinton Foundation, and Heifer International, (on adjoining property) have done a beautiful job revitalizing the site(s), that the area is now considered one of the most successful Brownfield projects in US EPA history. This revitalization has enhanced the environment, and spirit of Little Rock Arkansas and the River Market area.

It is now a considered one of the greenest corridors in North America. President Wm Clinton Avenue is now a thriving, and pedestrian part of town.

Downtown, The River Market Can Be Seen From I-30

The most recent addition to the fine city of Little Rock, honoring the First Lady, Hillary Rodham Clinton, is the new Children's Library. The library is "...Set on a six-acre site, the total construction cost was $12 million dollars.

The teaching kitchen is used to teach simple and healthy meal preparation, and they have taught skills such as processing herbs, and canning.

There is a large activity area, individual and group study rooms.

The theater is huge, and when not in use, looks out onto the "wetland" area constructed as a teaching aid. There is a community room, and the library boasts a collection of more than 21,000 books, DVDs, and CDs.

Not only that, but there are rooms for theater preparation, a music room, and Dumble-Door. This library was constructed with public service in mind, and it has already been instrumental in changing many lives.

I am lucky enough to have gotten a tour of the entire library, and I did not want to leave.

Another bonus of the location of the Hillary Rodham Clinton Children's Library is that it is in a poorer part of Little Rock, and enhances the community greatly.

Located behind the Little Rock Zoo, off of 12th Street, is the new Children's Library. Check it Out.

The Entrance, Theater, and Wetland