Some Tips When Traveling To Puerto Rico

The Enchanted Island Of Puerto Rico

View From Our Balcony At The Marriott Stellaris Resort

Two of my daughters and I decided to vacation in Puerto Rico for six days. I have wanted to travel to Puerto Rico for quite some time. I have been to Costa Rica and I really liked that country, but I wanted a comparison between the two. I am thinking of retiring and moving to a tropical place to live. I did a lot of research on Puerto Rico before we left. Some of the interesting facts I discovered about Puerto Rico:

Puerto Rico is an unincorporated territory of the United States, located in the northeastern Caribbean, east of the Dominican Republic and west of both the U.S. Virgin Islands and the British Virgin Islands. The United States acquired the island in 1898. The people consider themselves American, but they are very proud of their island and their culture.

Puerto Rico has miles of white sandy beaches, mountains and valleys, and many natural wonders. In addition to the splendors you will find yourself surrounded by warm and friendly people. I found the people very polite which is a trait that I really like.

The 3.966 million people that inhabit the island of Puerto Rico make it one of the most densely populated islands in the world. There are about 1,000 people per square mile. Even though the main roads have traffic bumper to bumper, the Puerto Ricans yield to one another.

A passport is not required for U. S. citizens. A valid driver's license is required to fly to visit Puerto Rico. We didn't have to worry about money exchanges because Puerto Rico uses our currency. Puerto Rico is the most accessible of the Caribbean islands and is serviced by several airlines. Puerto Rico is about 110X35 miles in size. The Puerto Ricans are friendly. They enjoy showing off their country. Most of them speak English, although Spanish is the primary language.

We bought an all inclusive package from Expedia that included airfare and the hotel. It was a very economical package for around $1,200 each. We would stay at the Marriott Resort and Stellaris Casino right on the beach and in the town of San Juan, the capital of Puerto Rico. San Juan is a large city with many sky scrapers. We would book our daily adventure tours from the hotel. The hotel had advised us the tour companies would pick us up in the morning and return us to the hotel in the evening.

We read Frommer's Puerto Rico Travel Guide for help in planning our itinerary. That was invaluable information for us. Ideally, you should spend two weeks in Puerto Rico to go from coast to coast, but we crammed a lot into our six days as you will see. I kept a daily journal of our trip. This trip was a wonderful adventure. Puerto Rico has many interesting things to do and places to go. I’d like to share our vacation with you.

We left Ft. Lauderdale, Florida at 7:00 a.m. for Puerto Rico. We arrived in San Juan at 9:00 a.m. We were met at the airport by an employee of the Marriott Hotel. This hotel will be our home for the next six days.

We went walking to look for a restaurant where we could find authentic Puerto Rican food. I couldn’t help but notice the sidewalks were in excellent condition: no cracks or pot holes. We saw very little litter on the streets and sidewalk. There are many cabs around, and these are newer model white vans, not the usual yellow cabs we see in other cities. We were told by one cab driver that their vehicles have to be inspected on a regular basis for cleanliness and safety.

We decided on a place called Café Del Angel: “real Puerto Rican food,” the sign said. I’ve heard so much about Mofongo; I just had to try that. We also ordered Canoa. I took one bite of the Mofongo, and decided I didn’t like that at all. I tried two or three more bites to make sure I gave it enough time to make a decision. Now, I was sure I didn’t like it! Now to try the Canoa: I can’t begin to describe this dish. It was like Taco filling like we’re accustomed to, with sour cream (and I don’t know what else) inside a plantain. That was pretty bad, too. Holly liked the Canoa, I did not. From where I was sitting, I could see a guy eating the most delicious looking sandwich: it made my mouth water. I was ready to ask him where he got that lovely sandwich when I saw the Subway wrapper! On the walk back to the hotel, I stopped at Walgreen’s and got a Butterfinger and called that lunch.

In The Afternoon We Went To Old San Juan

We went to Old San Juan by bus. It was standing room only. I stood and held on for dear life. The driver asked me how old I was. I thought he was being fresh until he told me I rode free. Seniors ride the buses free! Seniors have free admission to all the national parks, too. They also get discounts on many other things like the movies. It pays to be old in Puerto Rico.

Old San Juan was founded in 1521. It has the beauty of a centuries' old walled city with cobblestone streets, two fortresses, historic buildings, a unique mix of shops, restaurants (some very familiar: Pizza Hut, Subway, and many others), and museums. The main fort is called El Morro where you can see the historic Spanish wall that was built to protect San Juan Bay’s deep harbor from attack by sea. Old San Juan has many old churches and wonderful residences and gardens. It is a cultural district with theaters, clubs, bars and restaurants. Shops of all kind line the cobblestone streets.

We took two hours just to stroll the streets of Old San Juan, eat and shop; then we headed for the El Morro fort. We stayed there for about two hours. We enjoyed watching everyone playing in the big grassy area in front of the fort. There were kites flying, people laying on blankets, and lots of dogs. Some of the dogs ran free, a few on leashes.

An Expensive And Untasty Dinner At The Hotel

We returned to the hotel by bus. Since it was dark by this time, I suggested we eat dinner in the Marriott. I didn’t want to walk the streets after dark, because I’ve been told that’s a no-no. We later found this to be completely untrue. The locals come out at night to eat, shop and jog! 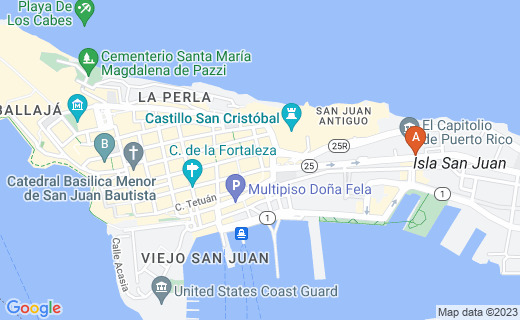 If you would like to learn more about the beautiful island of Puerto Rico, I invite you to read my other articles about this wonderful place.