Be Sure And Visit Old San Juan, Puerto Rico

Puerto Rico was discovered by Christopher Columbus in 1493 during his second voyage to the New World. Puerto Rico has one of the highest standards of living in the Caribbean. I have visited this country twice now, and each time I go, I am more impressed with the climate (averages 80 degrees year round) and the people who live here, and of course, the beautiful country. Puerto Ricans call their island, The Enchanted Island. If you spend time here, you will know why they call their home that. When you visit Puerto Rico don’t miss seeing one of the biggest attractions: Old San Juan.

www.Wikipedia source of my information

Plan To Spend One Day In Old San Juan

I would suggest you plan on spending the entire day in Old San Juan. There is so much to see there, and so much history to appreciate. About 2 million people a year come here to see this beautiful, historical city. Old San Juan is on a small narrow island in the North Coast 35 miles from the east end of Puerto Rico, and is joined to the mainland of Puerto Rico by three bridges. As soon as we entered the city in our car, we saw lots of locals gathered around in groups, singing and playing guitars. They were celebrating some kind of festival. The Puerto Ricans are always singing and celebrating something!

We later found out there was a Festival of the Horses! So we were treated to a parade of many beautiful Paso Fino horses. These horses are so beautiful with their prized smooth gait. The Paso Fino was imported to the Caribbean from Spain.

While in Puerto Rico, we saw many riders on their horses in the streets. Drivers of cars just let them have the right-of-way.

Old San Juan has beautiful old streets made of blue cobblestones, and is lined with the stone buildings dating back to the 16th and 17thcentury when Puerto Rico was a Spanish possession. Old San Juan has the atmosphere of colonial Spain with its pastel colored houses, filigreed balconies, and narrow streets. Several historic structures and museums are there, including a statute of Juan Ponce de Leon. The statute is made of bronze cannons. The streets are very narrow, the cars that do try to travel the streets move so slowly, it is very hard to drive around the city. It is better to walk. Just wear comfortable shoes! If you get tired of walking, there is a trolley that is fun to ride. You can hope off and on again whenever you want.

All along at the trolley stops, you see vendors under their umbrellas selling all kinds of Puerto Rican food, and there is plenty of liquid to drink. After shopping at the many little shops along the streets, we had lunch at one of the sidewalk cafes. I sampled a Puerto Rican dish (with chicken and black beans with rice, of course).

Flags Flying Over The Forts In Old San Juan

At one time during the 1940’s the city’s buildings were in such bad condition, some of the locals authorities wanted to just tear down the old buildings, and replace them with completely modern architecture. The Government Bank of Puerto Rico provided low cost loans to those owners who wanted to restore their buildings. Some owners did not want to renovate their buildings, and a lot of the old structures were razed. Old San Juan is known for its many public plazas. The oldest part of Old San Juan remains partly enclosed by massive stone walls.

This fort stands on a hill at the edge of Old San Juan. This 27 acre fortification was the largest ever built by the Spanish in the New World. It was constructed in 1783. The first shot of the Spanish-American War in Puerto Rico was fired from this fort in 1898.

The first thing you see is a grassy area about a quarter of a mile long to the entrance of the Fort. This area is usually filled with children flying kites and people walking their dogs. This Fort was the most strategic of San Juan’s defense system. El Morrow repelled attacks by the British, Dutch and French for the course of 300 years. A network of ramps and stairways lead up to a beautiful harbor view. Construction began in 1539, and was completed in 1878.

The first shots of World War I were fired from the Fort of El Morrow in 1915. There was a German supply ship that tried to force its way out of the bay to deliver supplies to the German submarines that were waiting in the Atlantic Ocean. After the U.S, fired on the German ship, the Odenwald, it was forced to return, and its supplies were confiscated by the United States.

During World War II, the United States Army added a massive concrete bunker at the top of El Morrow so they could keep watch for the German submarines in the Caribbean. In 1961 the U. S. Army retired from El Morrow. The Fort became a part of the National Park service at that time. El Morrow was used in the filming of Armistad.

One Of The Original Cannons Used At El Morro

View From The Top Of El Morro

Another View Looking Down From Fort El Morro

A Street In Old San Juan

You Are In Another World In Old San Juan!

When you enter into Old San Juan, it's as though you have stepped back in time hundreds of years ago. Just to walk the bue cobblestone streets, and look at the different colored shops with their filigreed balconies gives you an appreciation for the history and the beauty behind this old city.

You are SO glad you took the time to visit Old San Juan! 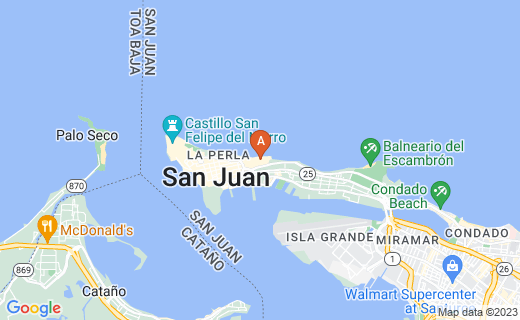 Books From Amazon About Puerto Rico