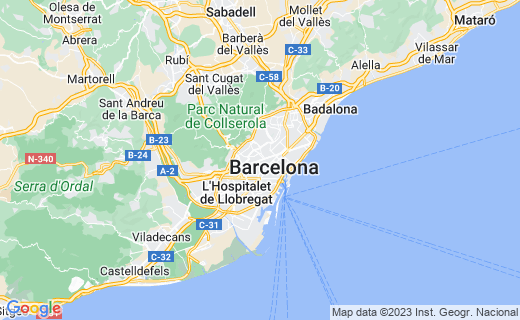 Its December again, half term and Xmas threatens!! So off we go to Barcelona for the Xmas period.

We fly out from Birmingham airport and arrive in Barcelona where we purchase a roving train ticket and catch the train to the city centre. From here we walk to our accommodation for the 10 days up near Park Guell – Residencia Erasmus. It comprised a small kitchen area, fridge, bathroom and bedroom and happens to be opposite a lovely bakery where we go every morning to purchase our bread rolls. A five-minute walk gets us to the nearest underground station, but if we were feeling energetic it was possible to walk through Barcelona into the middle of town then on to the seafront. I think we averaged about 14 km a day during our visit!!

After unpacking we go for a walk visiting the Real Santuario de San Jose de la Montana on our way to Park Guell. Although my second visit there Park Guell was just as fascinating, very organic and covering miles of countryside. We spend some time meandering through the park via covered walkways, circular seats etc.

Built-in 1900 by Antoni Gaudi for Eusebi Guell, hence the name. It is a public park and well worth the visit. It also includes Antonia Gaudi’s home where he lived from 1906 to 1925.

After breakfast we wonder through town, stopping for coffee sitting outside in one of the many pavement cafe’s under the outdoor heaters. As Barcelona is built on a grid system is it quite easy to find your way around. The street are filled with impressive buildings, mostly houses but with stunning facades.

We ended up at the imposing 13th century gothic Cathedral of Barcelona. It’s famous not only for the gargoyles protruding from the outer walls, but for being the resting place of Eulalia, patron saint of Barcelona.

Placa de Catalania is the next place we visit – a huge square with flower beds, fountains, monuments and entertainment. As it was Xmas there were several things going on – a human clockwork clock where on the hour the automated humans performed together with a ‘recycling’ exhibition showing what you can do with a load of old rubbish!

We walk back through the town to visit Las Ramblas and the living statues. It is a street in central Barcelona, popular with tourists and locals alike. A tree-lined pedestrian mall, it stretches for 1.2 kilometers (0.75 mi) connecting Plaça de Catalunya in the center with the Christopher Columbus Monument at Port Vell, which is our next port of call and is next to the Gothic Quarter. It’s very popular and has lots of pavement cafes along its route. Fortunately, as its winter it’s not too crowded with tourists.

Our walk then took us to the magnificent Maritime Museum

Today sees us catching the underground across town to Placa D’Espanya. This is one of Barcelona's most important squares, built on the occasion of the 1929 International Exhibition, held at the foot of Montjuïc, in the Sants-Montjuïc district. There are several monumental buildings in the district. The first one we visit is the old bullring, “Plaza de Toros de las Arenas”, now redeveloped into a shopping/leisure centre. Also to see are the Venetian towers, two obelisks on either side of the main avenue. The National Palace stand proud in an elevated position and is now home to the National Art Museum of Catalan. Also present are the four Four Ionic Columns that were erected in 1919, where the Magic Fountain of Montjuïc now stands.

They symbolized the four stripes of the Catalan senyera, and they were intended to become one of the main icons of Catalanism. Because of this, they were demolished in 1928 during Primo de Rivera's dictatorship, when all public Catalanist symbols were systematically removed in order to avoid their being noticed during the 1929 Universal Exposition, which was to take place on Montjuïc.

After looking around The Catalonian Museum of Art from the outside we walked to an area called Miramar Gardens which is the highest point overlooking the port of Barcelona and an integral part of The Botanical Gardens of Montjuic. Here, a large terrace affords a fantastic view of the port and the coastline stretching for miles. From here we took the cable car which runs from this high point all the way down to Port Vell, the super yacht basin in the Barcelona port area. The views on the way down were magnificent as we passed over luxury liners, cargo and smaller ferry boats and looked out over the whole city of Barcelona.

We catch the open topped hop on hop off bus just outside Park Guell and head into the centre of Barcelona and today the first stop is Casa Batllo, one of Gaudi’s projects in Barcelona. This was a remodelling of an original house that he completed in 1904 and is locally called the House of Bones. From the outside it is unique and multicoloured, almost as if had grown there rather than be built and the inside did not disappoint either! Hardly a straight line in the place, the windows were multi shaped, rounded, beautiful stained glass in places, the rooms arched. Around each corner was another amazing surprise. It’s hard to put into words the impact of his work on the senses – its just one gigantic work of art. The roof is a riot of multi-coloured ceramic reptilian like scales and the outside covered in colourful mosaics made from broken tiles, which were a recurring theme in his work. Every item has been carefully designed – doors, door knobs, ceilings, lights, nothing was left to chance. We spent a very long time looking round this building but I feel sure missed a lot!!

We hop back on the bus and continue our tour of Barcelona, part Torre Agbar, a modern gherkin shaped building, Sagrada Familia, Hospital of Sant Pau before getting off near our accommodation.

In evening went to Catalonia Square for the fountain display

Once again we catch the hop on/off bus to complete our circular tour of Barcelona. After travelling through the middle of Barcelona, we first stopped off at Pavellons Guell. This was one of Gaudi’s early commissions which he undertook in 1883. Owned by the Guell family it was used as a summer residence. Its most striking feature is the famous Dragon Gate, a ferocious five metre wide wrought iron sculpture.

The huge ribbed construction of the hall is to be a recurring theme and a design he uses to effect in both Casa Batllo and in stonework archways in Park Guell.

A further walk took us to the Palau Reial de Pedralbes and the beautiful gardens which we walked around. From 1919 until 1931 it was the residence for the Spanish Royal Family when they visited the city but now houses the ceramics museum.

Today we walked down to the Park del la citadella which is a magnificently landscaped park enriched with beautiful sculptures and monuments. We also visited the main Barcelona railway station and by chance just opposite was a Greek restaurant where we stopped and had lunch.

The photographs below tell the story.

Christmas day but in Spain life goes on as usual. We make for Sagrad Familia, Gaudi’s famous church. To say it’s like do other building on earth is an understatement and although it is still under construction in parts, 90 years after his death, it is still a marvel of creativity.

It is a large Roman Catholic church, designed by Catalan Spanish architect Antoni Gaudí (1852–1926). Gaudí's work on the building is part of a UNESCO World Heritage Site, and in November 2010 Pope Benedict XVI consecrated and proclaimed it a minor basilica, as distinct from a cathedral, which must be the seat of a bishop.

Construction of Sagrada Família commenced in 1882 by architect Francisco Paula de Villar with Gaudí becoming involved in 1883 after Francisco resigned as the head architect. Taking over the project, Gaudí transformed it with his architectural and engineering style, combining Gothic and curvilinear Art Nouveauforms. Gaudí devoted his last years to the project, and at the time of his death at age 73 in 1926, less than a quarter of the project was complete.

Sagrada Familia's construction progressed slowly, as it relied on private donations and was interrupted by the Spanish Civil War, only to resume intermittent progress in the 1950s. Construction passed the midpoint in 2010 with some of the project's greatest challenges remainingand an anticipated completion date of 2026, the centenary of Gaudí's death.

The basílica has a long history of dividing the citizens of Barcelona: over the initial possibility it might compete with Barcelona's cathedral, over Gaudí's design itself, over the possibility that work after Gaudí's death disregarded his design, and the 2007 proposal to build an underground tunnel of Spain's high-speed rail link to France which could disturb its stability. Describing Sagrada Família, art critic Rainer Zerbst said, "It is probably impossible to find a church building anything like it in the entire history of art" and Paul Goldberger describes it as, "The most extraordinary personal interpretation of Gothic architecture since the Middle Ages."

We hope to be able to return to Barcelona sometime in the future when the building is complete!!

We spend the day wandering around Barcelona, taking in the atmosphere.

In the evening we head to Placa d’Espana to see the magnificent light/fountain/music show, along with what seems to be the majority of the visiting population!! It was fantastic and we took far too many photos.................

The final day has arrived. We vacate our accommodation and lock up our luggage for the day. Next we head down to the sea to visit Aquarium Barcelona which is an aquarium located in Port Vell habour. This harbour was built as part of an urban renewal program prior to the 1992 Barcelona Olympics. Before this, it was a run-down area of empty warehouses, railroad yards, and factories.

The 35 aquariums at the facility are home to 11,000 animals representing 450 species and includes an ocean tank for sharks, rays and other large fish, which is 36 m (118 ft) in diameter, 5 m (16 ft) deep. It contains a tunnel which you go through on a moving convenor belt whilst being watched by the sharks etc. Fantastic experience.

We return to our luggage lock up, after collecting our cases catch a bus from Placa de Catalunya to the airport and them back to Birmingham.