Unawatuna, located in the Galle district of southern Sri Lanka is best known for its pristine beaches that attracts hordes of western tourists and locals alike around the year. It was voted as world’s best beach in 2004 by the Discovery channel. It was relatively unscathed during the Indian ocean tsunami, therefore local tourism has flourished again.

Year round sunshine and tropical weather allow visitors to enjoy an affordable beach vacation any time of the year. Its clear water and moderate strength waves are ideal for many activities including surfing, snorkeling or swimming.

The only practical way to come to Sri Lanka is via international flights to Colombo, the capital city. Once in Colombo, visitors have a number of options to reach Unawatuna which is about 120 kilometers away.

Taxi: It is most comfortable and quickest way to reach Unawatuna. A taxi would take 2 hours and 30 minutes to cover the entire journey via A3 expressway. Most of the website and prepaid taxi booth at the airport would quote US $60 to $80 for the trip. However, it is possible to call a company in advance and negotiate prices. I paid $45 on pre-booking and paid money directly to the driver on arrival. In addition, there are several radio taxi companies (Budget, Kangaroo) that offer a one-way drop to Unawatuna from Colombo.

Bus: There is no direct bus to Galle, the main bus station for Unawatuna. One can get #187 going to Colombo fort (1.5 hours) and change to small minibuses plying on the southern route of Colombo to Matara (3.0 hours). If you are already in Colombo, you can also get an express bus from Maharagama to Galle running every 20 minutes. This takes expressway No 3 and you can reach Galle in just over an hour for LKR 350 (US$ 2.5). Galle is 5 kilometers from Unawatuna that can be reached by bus number 350 or tuk-tuk ($2.0)

Train: Unawatuna is connected to Colombo by a number of trains running on Colombo - Galle - Matara route. The distance between Colombo to Galle is 115 kilometers that can be covered in 2.5 hours. There is no first class coach available so one has the option to book 2nd class (LKR 180, USD 1.5) or a very crowded third class coach (LKR 100, USD 0.70). There is also a luxury, air-conditioned, Rajdhani carriage attached to morning 6.30 train that has leather seats and free wifi. The fare is LKR 990 (USD 6.5) 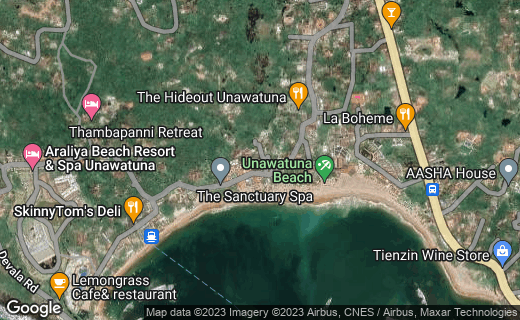 Best Beaches On A Budget

Which Asian Country Has The Best Beaches?

The currency of Sri Lanka is Rupee issued in the denomination of Rs 10, 20, 50, 100, 500, 1000, 5000. US Dollars, British Pound, and Euro are easily accepted and exchanged for local currency at major banks, hotels and currency exchange kiosks. While it is advisable to change currency through authorized banks or money changer, but in practice, most shops are able to accept foreign currency at the current market exchange rate. In December 2015

Use of credit cards is limited to big cities and major departmental stores only. Most of the shops and restaurants in Unawatuna do business in cash only. The nearest ATM is next to the Holcim factory on Galle - Matara highway. There is a limit on cash withdrawal set by banks (USD 300 to 500). In December 2015, 100 US Dollars could be exchanged for 14000 LK Rupees

Fortunately, internet connection and free wifi are widely available. There are several companies (Mobitel, Airtel & Dialog) selling tourist SIM card bundled 3G internet. I purchased one from Dialog with 2 GB data and 30 days validity for LKR 1400 (US$10). Shops at Colombo airport can set up the internet on your phone and activate SIM card in few minutes. This would save you a lot of roaming voice and data charges.

The Galle Post Office is near Galle fort that can send an odd postcard or post parcel using the EMS network.

Unawatuna has numerous options for accommodation ranging from basic $10 B&B to high-end luxury beach resorts costing several hundred dollars per night. Most websites like Agoda or booking.com can accept booking even without a credit card. Credit card, if at all used, will be for guarantee purpose and you have the option to settle bills in cash upon check out.

Money saving tip: Unless you are going to Unawatuna in peak season, book a room for a couple of nights only. Most of the smaller hotels and guest houses are happy to extend your booking at a cheaper price (10% to 15%) because they do not have to pay the booking fee to travel website if you book directly with them. Most B&B provide decent western style breakfast for two for US$ 5 which may be included in the price.

Most of the cafes and restaurants in Unawatuna are located on Yaddehimulla Road. This narrow, winding road has scores of cafes and restaurants to suit every taste and budget. The all serve few western dishes along with Sri Lankan food. The recent influx of Chinese tourists prompted a significant rise in Chinese restaurants which is worth a try.

For seafood lovers, this is a paradise. Restaurants typically display the catch of the day on ice near the entrance and you can choose your fish.

If you are staying for a few weeks in a self-catering apartment it would make sense to buy groceries from Food City located near Galle fort train station. There is a fish market operating during early morning along the beach near Galle fort on the main road going towards Matara.

Getting around in Unawatuna

Unawatuna is a small place that can be explored walking. You may use a tuk-tuk to visit Galle fort or take any local bus going towards Galle. It is possible to rent a scooter for LKR 600 (US$5) or a small car for LKR 2000 (US$15) but I found it unnecessary.

Getting Around In Unawatuna

Things to do in Unawatuna

Unawatuna beach has gentle, low rising waves which make it ideal for swimming and snorkelling. Most beach front establishments provide free sun beds and chairs provided you order something from them. In addition, there is a not so secret jungle beach once secluded, a small patch of the beach which is increasingly being crowded by the tourists. One can also hop a 30-minute bus ride to visit the famous beaches of Hikkaduwa.

If you are ever tired of sunbathing at the beach, here is a list of places that can be visited.

Japanese Peace Pagoda is perched on Rumassala hill about 3 kilometers from Unawatuna beach. It can be reached by road by tuk-tuk took (LKR 300) or moderate trek through the woods. Like all Buddhist temples, it is very peaceful. This one is one of 80 peace pagoda built by the Japanese Nipponzan-Myōhōji order. You will have to remove shoes while entering pagoda but it is worth the effort. Women may have to wear at least knee length skirt. They loan a free sarong style wrap around if you are not modestly dressed.

They also have an evening prayer meet at 5 pm which is a unique experience in itself. View of the sunset overlooking Galle fort is amazing from this place.

Galle fort was built by the Portuguese in the late 16th century and later extensively fortified by the Dutch in the mid 17th century. Currently, it has been declared as UN world heritage site and undergone a major renovation. The entire fort has been conserved as per UN guidelines. Now, it houses a maritime museum, restored churches and several upscale hotels, restaurants, spas and boutiques. The entire place is dotted with restored 18th-century buildings along cobbled stone pathways.

There are few upscale hotels including Amangalla hotel and Galle Fort Hotel. In addition, there are few expensive, luxury villas available for daily or weekly rentals. There are several excellent cafes and restaurants serving a variety of food. I would recommend trying, at least, a few during afternoon or evening.

There is also an old clock tower (currently under restoration) and a lighthouse within the fort compound.

There are several tour companies advertising whale watching trip starting from LKR 4000 to 8500 (US$ 30 to $60) which includes hotel transfers, free breakfast and 3 to 5 hours in sea watching whales and dolphins.

I am personally against chasing whales and disturbing them for touristic pleasure, but if must go choose the biggest boat operated by the Sri Lankan navy on weekends. As per their website charges are $60 per person. If you are prone to sea sickness, please avoid this trip or take Avomine tablets to prevent nausea and headaches.

There are several beaches in Unawatuna, Mirrisa and Hikkaduwa that have ideal conditions for surfing. The ocean swell is 3 to 5 feet (1 to 1.5 meters) with a regular frequency which is ideal for beginner to experienced surfers alike. Surfboards can be hired for LKR 1000 to 2000 while group lessons are provided from USD 40 onwards.

The best season is from December to April when water is clear. There are several in Unawatuna including Unawatuna Dive Center which is PADI certified.

There are numerous Ayurvedic yoga and spa centers in Unawatuna. Most spas would offer yoga classes for LKR 800 per hour. A typical spa menu will set you back by LKR 3000 to 5000 depending on the treatment offered. For a luxury experience, try upscale Spa Ceylon which has several branches in Sri Lanka.

One may sign up for cooking classes which include a visit to the local fish market, explaining the use of local spices and cooking lessons all for $25 onwards.

Sri Lanka is generally safe for travelers, including solo female traveler. However, you may have to look out for pushy Tuk-tuk took drivers who will accost tourists aggressively. Watch out for beach restaurants that overcharge keeping two set of menus or add drinks that were not ordered. A western woman traveler told me that once a local guy on motorcycle harmlessly followed her on beach road but it could be an isolated event. Like every tourist destination, locals are helpful and committed to making their paying guest feel safe. Mosquitos are a big problem in entire Sri Lanka so carry a good bug spray to ward off those blood suckers. Leeches are a common irritant if you are trekking through shallow creeks or other fresh water bodies. Do carry salt and wear protective boots while hiking / trekking.

I did encounter a ferocious looking but totally harmless monitor lizard near the hotel I was staying. I was told that monitor lizards or Kabaragoya in local language are 100% harmless creature and protected species under CITES (Convention on the International Trade of Endangered Species).