Best Fun Things to Do at the Cape Canaveral National Seashore

The US National Parks System is one of the best projects ever begun by any presidential administration in America - and a big Thanks again to Teddy Roosevelt! Preservation takes on a humorous tint at times, though. Around Florida parks, we can see mounds of shells piled high by Native American Nations since at least 8,000 BC.

The native groups enjoyed oysters and other seafood, then piled the empty shells in a particular place where they lived. Eventually, the mounds were woven into culture and even some ceremonial activities.

Today, the shell mounds are important indigenous artifacts that are protected, even though they were discards at one time. The 57,000 acres of undeveloped beach and shoreline at Cape Canaveral is home to at least 100 Timucuan Native American Mounds that are being preserved beside the local wildlife and native plants managed by the US National Park Service.

At 24 miles in length, the Canaveral National Seashore is also the longest undeveloped beach on the Florida Atlantic Coast. At least 14 endangered species of wildlife live in the protected area, including turtles. Sea turtles, especially loggerheads, are a favorite species to watch as they lay eggs, hatch their young, and the young clamber across the sand into the ocean.

All this is on view among turtles from May though October every year at the National Seashore. On designated weekends, rangers lead visitors in instructional tours and vacationers can photograph the turtles from a short distance.

However, the Portuguese man-of-war jellyfish with its stinging, venomous tentacles is a species you will want to avoid altogether in the Canaveral swimming waters. If you have not seen them on the beaches, they may look like balloons, but their tentacles can reach up to 50 feet, so beware, and keep children away from them

Baby Sea Turtles: Billy Joel's "In the Middle of the Night"

Along the US Space Coast 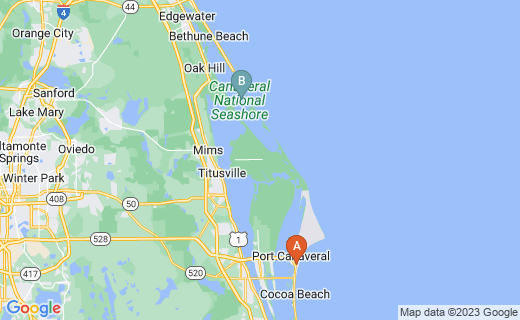 The Kenendy Space Center owns all the land within the protected area of the National Seashore, along with that contained in Merritt Island National Widlife Refuge. Scientific organizations, government entities, and commercial businesses are increasingly developing wildlife refuges around their facilities, as is Perkins Observatory in Delaware, Ohio as of several years ago. The development aides sustainability, conserves water, replaces first growth forests, and provides safe habitats for wildlife and native plants. It also provides scenery and recreational activities for visitors. Bird watching is a growing hobby at these sites and nature walks are becoming increasingly popular. The boardwalks at the beaches offer vewing platforms for seeing more of the wildlife and landscapes.

The manatee was once prolific in the Atlantic and Gulf Coast waters from North Carolina all the way to Texas, but have decreased in numbers. They are concentrated today in the Central Florida Atlantic, or Space Coast area, especially at the National Seashore. Boat tours to view them, along with dolphins and other marine life are offered regularly. The manatee is protected by the National Park Service as an endangered species.

NOTE: Florida supports the largest number of American and Southern Bald Eagles in the lower 48 States. Hundreds of species of marine, avian, repitilian, and other wildlife live in Central Florida.

A Different Kind of Accommodations for Visitors

Parks and Plates: The Geology of Our National Parks, Monuments, and Seashores
Buy Now

One of the interesting tours through the National Seashore at Canaveral is through an area called Seminole Rest. It is a former camp site (the "Rest" part) for the Seminole Nation from around 2,000 BC to 1600 AD as far as can be determined with carbon-dating processes.

This is also where Seminoles likely first encountered Europeans in the Spanish, French, and English, along with Black Africans. Some members of the last group joined the Seminole Nation in order to escape slavery, while others became cowboys.

Interestingly, herds of scrub cattle were prominent in the interior of Central Florida, and a few small groups of them remain today! A one-half mile trail around the camp site includes clam shell mounds and other artifacts. The buildings are from just after the Civil War and are listed in the US National Register of Historic Places.

Seminole Ranch Conservation Area is also an interesting location and sits to the west of the Canaveral National Seashore, off Highway I-95.

Kennedy Space Center is, of course, probably the most famous venue near Titusville and Cape Canaveral. A number of bus tours originate from the center out into the historic beginnings on the Cape of the US Space Program. Buses transport passengers to Launch Complex 39, the former US Space Shuttle launch site and to Cape Canaveral Air Force Station for guided tours.

Other features at the space center include an IMAX theater with outer space exploration films, the NASA Art Gallery (breathtaking), and the Gallery of Spaceflight, many free-of-charge. The Astronaut Memorial in the center honors all of the men and women that have lost their lives while serving the US Space Program and journeying to the stars.

The John F. Kennedy Space Center was rated by readers in 2009 as the 39th Greatest Place to Stand in America at www.StoodThere.com in its 100 Greatest Places to Stand Contest.