If you're looking for a little adventure in the Garden State, be sure to check out Alpine, New Jersey's Devil's Tower. Ranked one of the most haunted places in the state, there may be more to this impressive stone structure then meets the eye.

Devil's Tower, located in Alpine, NJ, is often considered to be one of the most haunted places in the Garden State. The tower was built in the early 1900s as part of a larger estate named Rio Vista, and by a man named Miguel Rionda, an immigrant from Spain who wanted to establish himself in the US after making his fortune on a sugar plantation in Cuba.

Legend has it that, shortly after it's completion, Rionda's wife climbed to the top of the high tower to see the view for the first time. While up there, it is said she witnessed her husband with another woman. Overcome with grief, she threw herself from the tower, ending her life then and there.

It's said that Rionda's deceased wife still haunts the tower and the surrounding area to this day. Shortly after her death, many mysterious occurrences caused further construction on the tower to come to a dead halt. Workers suffered injuries on the job, and many items went missing without explanation. Rionda, fearing that his wife's spirit had come back to get vengeance for her pain, ordered the underground tunnel on the property closed forever, and all further construction was stopped for good.

After the tragedy, and the ensuing alleged supernatural events, the locals became very suspicious of the tower. After Miguel's death in 1943, the estate was subdivided between the constructed property and the surrounding woodlands. Locals, fearing the stories of the property being haunted, ordered the tower to be demolished. However, as the tower was being prepared for demolition fell from the tower to their deaths. The people believed that the ghost of Rionda's wife was protecting the tower, and all demolition attempts ceased.

According the paranormal researchers and countless visitors to the location, the tower remains haunted to this day. Some legends say that if you drive your car in reverse around the tower three times, the ghost of a woman will appear before you. Many believe, in accordance with the local history of the land, this is the ghost of Rionda's wife, who never left the tower. Others say that if you walk around the tower six times, the devil himself will appear before you.

Many people who have visited the tower have also claimed to see a terrifying shadow inside of the tower, staring out at them. This often scares visitors silly as the tower itself was closed off from the public many years ago, and is widely considered unsafe for anyone - any human - to climb. It is highly unlikely that any figures or strange events witnessed at the tower are caused by any human source.

EVP and Strange Activity in the Devil's Tower

While it is still possible to drive by and see the tower, visiting the tower today is out of the question. The tower is now just a boarded-up, crumbling structure and is very, very unsafe for anyone to go near. The property itself is also closed off by a chain-linked fence, in order to protect any curious visitors from falling debris... and any other hazards which may exist on the property. 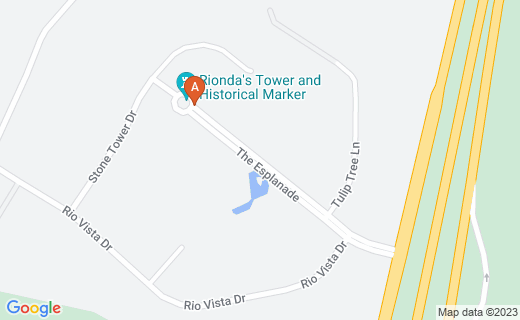 The tower is visible along a road called "The Esplanade," in Alpine, New Jersey

Do YOU believe the Devil's Tower is haunted?