Fine Arts and the Complaints Choir of Columbus

Complaining at the Museum

The Columbus Museum of Art is different. At this museum, you not only see a variety of fine and folk arts displays, but experience everything from a veritable Curiosity Shop of scientific and artistic objects to family art days to some fine concerts. One of these musical events features The Complaints Choir of Columbus.

Have you ever heard complaints sung by a choir? The Complaints Choir is not yet well known, but soon will become famous as these groups are organized around the world. Fun to hear, this is a unique project started by Tellervo Kalleinen and Oliver Kochta-Kalleinen in 2005. They considered that people complain a lot. There are a lot of jokes and cartoons about complaint departments. You hear all about them in stand up comedy acts.

Did you know that in Finnish the word Valituskuoro means complaints choir? It also has the flavor of many people complaining together. Knowing this, the pair mentioned above created a musical choir for complaining and tested it in Birmingham, England, It was a hit! Now Columbus has a complaints choir that entertains children and adults (watch the video below).

On a more serious note, the Columbus Museum of Art dedicates an annual event to considering social issues in Ohio, America, and the world. This is the Art of Concern Symposium that has addressed the topics of Gothic Art, surveillance, and heavy issues of war, race, and politics. Thus, this museum is not just a "building full of paintings." It addresses some important concerns in adult events, but balances this with good fun throughout the year and a happy variety of events and one-day outings for adults, children, and families. You'll like it!

Complaints Choirs of the World

The Columbus Museum of Art in Downtown Columbus was included in the National Register of Historic Places in March of 1992. It was built as the Sessions Mansion, but the house was replaced in 1931 with the current building. The museum is quite large, having stone structures and a wide staircase that leads down to the sidewalk. However, back in 1878, the Sessions Mansion was first used to form the Columbus Gallery of Fine Arts and as such, was the very first museum to submit a charter to the State of Ohio.

The museum charges a reasonable admission, but also offers free admission and/or tours twice weekly so that anyone interested in fine arts and museums can come to visit. Free Tours are given Thursdays at 6:30 pm and Sundays at 1:00 pm and admission on Sundays is free as well. We can see anything from the Old Masters to Folk Art and progressive installations that make people talk. The museum overall is undergoing massive improvements, but remains open during changes. A large renovation project should be completed by 2012, but the leadership of the organization wants to be constantly moving forward.

In addition to guided torus, the museum offers a Cell Phone Tour with which you can guide yourself around the galleries. It's amazing! parking at the museum is free and a restaurant is available inside: the Palette Express, with an always changing and improving menu of salads, sandwiches, desserts and surprises.

Museum On the Move and Art Around Town - Family-friendly travelling exhibits at libraries, malls, festivals and other events. 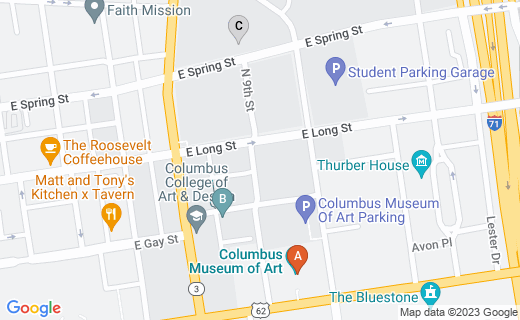 A single Columbus Arts Festival is simply not enough for the growing population of the city that enjoys fine and performance arts and the marketplace for them all. In fact, People form around the world are coming to the festival, the museum, and the art and design college and asking for more.

The first annual Art, Design & Antiques Market at the Columbus Museum of Art is to occur Thursday through Saturday on September 23 - 26, 2010, with some pre-event activities, and the city is looking forward to it.

This is the chance to learn more about antiques if you've been watching The Antiques Road Show and been amazed by the high-dollar antiques and worthless-yet-sentimental objects surprising people on the show. Two special Art Escapes Antique Tours are to be held on the Wednesday before the first day of the market and will include a Columbus tour to the historic German Village and the home of a famous designer; and a Lancaster OH tour of a famous mansion and arts center. Lunch is included with either tour.

Market events include a gala/party, shows, antique appraisals, SPEED DECORATING (that sounds like fun), Antique Cars, a shoppers market, and talks by important people in the fields of art and design. 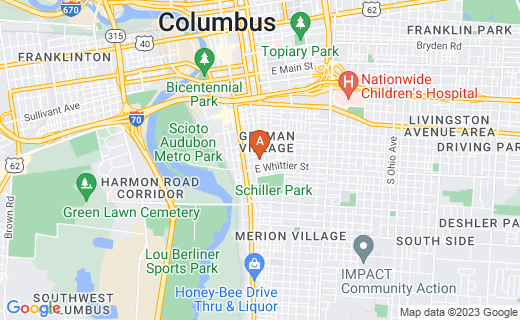 This museum administration and staff like to make connections in a number ways. They partner with other city organizations to bring us such fun as the Complaints Choir and the new Market in September. They also like to connect art with history and different forms of art together.

A new exhibit at the museum will feature a link between photography and painting in America, Another connects the art of a famous cartoonist as he adapts the Old Testament Book of Genesis. An exhibition on display through Spring 2011 features animals in art appropriate to families and is called Fur, Fins, and Feathers. Staff of the Columbus Zoo come and help with that one. Chihuly blown glass wonders have been on display at the museum several times in the past. Certain collections from the museum also go out to other venues around the city from time to time.