The first thing you might notice when you get off the train at Bodmin Parkway is that it's not actually in Bodmin. If you booked your train ticket, expecting to walk out into the town, with taxi ranks and bustling shops, then it'll come as a surprise to you when you find the station is 'in the middle of nowhere'.

The train station actually in Bodmin town is only a tourist attraction and is the starting/ending point of the Bodmin & Wenford Steam Railway excursion.

If there's a train running to Bodmin, you can cross over the lines via the footbridge and catch a train into Bodmin on the other side, but these trains aren't always available and, as a tourist attraction, you won't get much change from £10 for a one-way ticket into town - if you do this, buy your ticket from the guard on the train.

There is, of course, a taxi service at Bodmin Parkway station - with taxis available alongside in the station car park.

The main taxi service at Bodmin is Parkway Taxis, who have an office there. You can call to book a taxi before you arrive, or take potluck if you're not in a hurry .... after all, you can have a toasted tea-cake and hot tea at the Bodmin Parkway cafe while you're waiting or stand and watch to see if you'll be lucky enough to see a steam train from Bodmin & Wenford Railway arriving at the other platform.

There's one bus service operating from Bodmin Parkway Railway Station.  The Western Greyhound 555 Service, going to Bodmin, then on to Wadebridge and Padstow.  Buses are hourly during the week, there are 2-3 evening services; buses are 2-hourly on Sundays.

Right on Bodmin Parkway station is a lovely, tiny old signal box cafe.  It's right at the foot of the walkway that crosses over the lines.

Inside it's quirky, but neat, in a traditional old cafe way.  I love it.  It serves simple food, such as sandwiches, paninis, jacket potatoes and toasted tea-cakes.  You can also get a selection of cold drinks or tea/coffee.  Prices are very reasonable too.

If you enjoy a quick snack in a quirky piece of history, then pop in and have a toasted tea-cake or more!

As well as being the main line, Bodmin Parkway has a second line, which is used by the Bodmin & Wenford Steam Railway to run pleasure excursions between Bodmin General Station in Bodmin and Bodmin Parkway.

Often, when you're at Bodmin Parkway, you'll see an old steam train arrive on the far side platform.

If you're at Bodmin Parkway wanting to get onto the Bodmin & Wenford Steam Railway train, then cross over the lines on the walkway, get onto the steam train and buy a ticket from the guard. 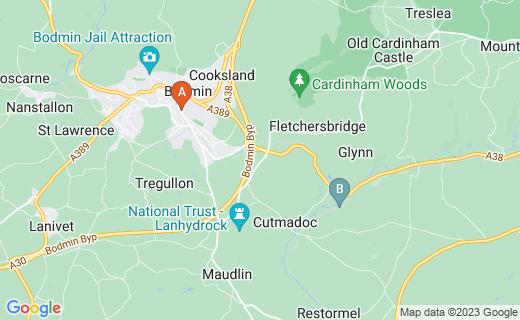 Parking at Bodmin Parkway railway station has a capacity of about 70 cars and is open 24 hours a day, 7 days a week. The charge is only £2/day.

To pay for parking at Bodmin Parkway station, you can either use the text service to text through your car registration and pay electronically, or if you're like me, you can put coins into the machine by the station entrance and get a good old fashioned sticky ticket for your windscreen!

What to do in Bodmin: