The Wappo tribe of Native American Indians once lived in this area. Their word "Napa" is from their language, but of unknown meanings. This area filled with vineyards today was once rolling hills filled with creatures such as deer, bear, mountain lion, and elk. Settled in the 1830's, California became a state in 1850 and the Native Wappos were sadly wiped out of existance by 1870 because of illness brought by settlers. Vineyards were planted since settlers began arriving and were in steady growth by 1880.

In Napa, the calendar of events list is so comprehensive there is no way to list it here. However, suffice it to know, on any given weekend, there is something happening in the Napa Valley area, from celebrity chef happenings to wine tastings on a train. Napa is located about one hour from San Francisco and one hour outside of Sacramento. It is just east of Sonoma County. Temperatures reach the 100's in the highest point of the summer.

Have You Visited the Wine Country?

Mendocino County is named for the Cape Mendocino which is near Mendocino (the town), which lies closer to the ocean and in the northern portion of the county. Cape Mendocino was named by Spanish explorer, Juan Rodriquez Cabrillo, in 1542, during a tour of the Pacific Coast. Cabrillo named it after Don Antonio de Mendoza, the viceroy of New Spain. Today, New Spain is better known as New Mexico.

A quarter of all wine grown in this region is organic, with an increasing supply of organic wine with each passing year. Some, like Parducci Wines, have an interesting story behind their origin. Chardonnay is a leading grape grown in Mendocino County. In June and July, normal temperatures are in the high 90's or 100's.

Take a look at the calendar of events for Mendocino County here.

The earliest settlers were the Pomo, Miwok and Wappo - Native Americans of this area. The name "Sonoma" originates from the name of a local Native American Indian group, known as the Sonomi. According to the local Indians that still reside in the area, "Sonoma" means land of many moons. Sonoma County is considered a coastal county.

Sonoma County is continuing to grow and expand, as the population growth reflects, with over 250 vineyards. Here, many dairy farms and apple orchards have been converted to vineyards. Sonoma County has a slightly cooler weather pattern than Napa or Mendocino, due to coastal breezes sweeping through most parts of the county each day. Located west of Napa and South of Mendocino, most highs are in the 90's with infrequent days of temperatures in the 100's equally less than a week in duration for the year, in most years.

Where is Napa, Sonoma and Mendocino 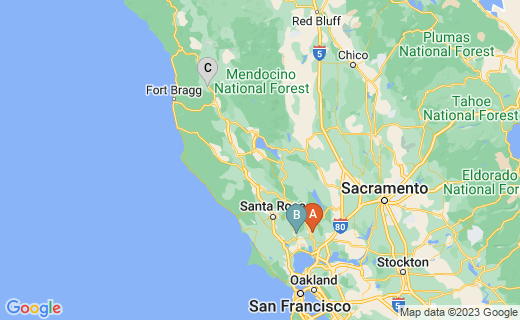