The History of Camden Fort Meaghe

The original defensive structures of the Fort was built in 1550. Then further improvements were made later on.

As the England conquered Ireland during the Battle of Kinsale in 1601. At the end of the century, the Fort was strengthen again by the Jacobites in order to block the Williamite fleet of naval forces. The Fort was used to fire the fleet as it tried to enter the Cork Harbour in 1690. Eventually the Fort fell to the invaders.

Naval structure built at Kinsale was then transferred to Haulbowline Island Naval Base at the very start of the Napoleonic War in 1799. Additional defences surrounding the coastline were installed in order to protect the naval base. Fort Camden was remodeled as well.

The Fort was used as a prison for a short period of time in 1837. Its prisoners became the laborers of the construction of the defensive structures.

A contractor was hired to establish the large scale construction in Cork Harbour to strengthen the defence of Ireland. The construction began in 1861, but two years after, the project was eventually handed over to other authority. The War Department finished the project after the original contractor declared their bankruptcy.

In 1891, one of the “Brenan Torpedo” was installed in Fort Camden. This torpedo was considered the world’s first practical guided missile. Each of these pieces was only installed in 8 different locations around the world. The other 7 are Fort Albert in Isle of Wight, England; Cliffe Fort in North Kent, England; Garrison Point in Medway, South East England; Pier Cellars in Plymouth, Cornwall; Fort Tigne in Sliema, Malta; Fort Ricasoli in Kalkara, Malta and Lei Yue Mun in Hong Kong.

An Anglo Irish Treaty was established during the Irish Free State in 1922. The treaty stipulated that the control of three ports were under the British power. These so called “Treaty Ports” are Berehaven, Harbour Defences at Cork and Lough Swilly.

The Fort was handed over to Irish authorities on July 11, 19938 at the Harbor Defences at Cork. Eamon de Valera and Chiefs of Irish Military took part in the handover ceremony.

The Cork County Council acquired the ownership of the Fort in 1989. Long term plans in making it a tourist attraction were developed upon acquisition. The Fort was opened only after 21 years after acquiring the place.

The clean-up restoration of the Fort happened in July 22, 2010, which was headed by Cork County Council. A committee, named Rescue Camden, was formed to maintain the site. As they opened the place for the public starting September 2010.

During the celebration of the Fort’s 75th anniversary in 2013, the place was handed over from the British Forces to the Irish Forces. This commemoration resulted in renaming the fort as Camden Fort Meager.

The Fort Changed Its Name 5 Times!

Originally, the Fort was named as “James’ Battery” in 1550. Then the Fort was improved and renamed as “Rams Head Battery” in 1779. 16 years after, the Fort was renamed again as “Fort Camden” to honor John Jeffreys Pratt, the Lord Lieutenant of Ireland and Earl of Camden. In 1938, it was renamed as “Fort Meagher” in honor of Thomas Francis Meagher. He first unveiled the Irish Tricolour in 1848 and led the young Irelanders. Eventually, as a result of combined British and Irish history of the place, the named was then again changed to “Camden Fort Meagher” in 2013.

Interesting Places inside the Fort 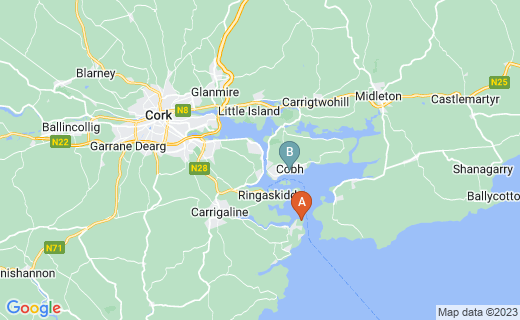 One of the Finest Classical Coastal Artillery Fort in the World

Best Places to Travel in Europe