The Clarno Unit is part of the John Day National Monument and is located in Central Oregon.  While the units are spread apart, they are easily accessed and can be seen year round.  The Clarno Unit is near Fossil, Oregon and is a 1969 acre part of the park which receives upward of 12,000 visitors per year.

The Cliffs of the Palisades is the most popular attraction in the Clarno Unit – they were formed by a series of volcanic mudflows 44 million years ago.  The technical term for the mudflows is lahar and these lahars preserved the vast number of fossils seen in this area.  The area now comprised of a mostly desert-type topography was once a near tropical forest that received about 100 inches of rain per year.  Contained in the lahars are the fossils of such things as the 4-toed horses, rhino-like creatures and reptiles similar to the crocodile as well as numerous plants and trees.

Also part of the John Day Fossil Beds National Monument are the Painted Hills outside of Mitchell, Oregon and Sheep Rock, about 35 miles east of Mitchell.

The area of the John Day National Monument was once inhabited by Indian tribes. Once settlers began arriving in search of land in the 1950’s, it was changed forever. John Day was one of the first to settle the area but he actually is famous for the John Day River being named after him - later came the naming of the fossil beds after him based upon the river being named after him. As a little aside, it seems that if you discover the mouth of a river, the entire river will be named after you. He discovered the river mouth by chance where he was also robbed by a band of Indians. He and his party were unharmed, were eventually rescued and then he made his way to Astoria, Oregon which is on the coast. However, the river and thus the area became famous because of his discovery of the river mouth.  Go figure!

Thomas Condon was a geologist who is credited with much of the area’s history. He was a minister with a strong background in geology and came to the area to study the many incredible geological wonders. He first visited the area in 1865 and became the first state geologist teaching geology at the University of Oregon in 1872. He was drawn to the area by one of his 8 sons’ letters describing the area and he contributed much to its fame and later recognition as the John Day National Monument.

James Cant is also credited with much of the area’s history as they were responsible for developing the ranch that now stands at Sheep Rock as the visitor’s center. He and his family introduced sheep ranching to the area when gold was discovered in the area in the 1860’s and later, the ranchers switched to cattle. The National Park Service acquired the Cant Ranch in 1975 and began to restore its historical appearance. The surrounding buildings and 200 acres were designated a National Historic District and now is open to the public as a marvelous museum of the area’s history and discoveries.

The Clarno Unit has hiking trails, exhibits and a picnic area. It is roughly 18 miles west of the town of Fossil. What to do in the area?

There are daily museum talks to attend regarding the fossils – these talks are presented periodically but also upon request.

There are weekend Sheep Rock talks that begin at 1:00 p.m. at the visitor center and are quite informative about the fossils.

There are Blue Basin hikes – part of the Sheep Rock division - usually early October but call for information.

There are also fossil bed auto tours – early to mid October. You join a ranger and go on a 2-hour road trip into the fossil beds. These usually start at the Sheep Rock unit.

There is also an orchard offering fresh fruits of all kinds cycling through the summer in Kimberly.

The area is a great place for camping and white water rafting, fishing and hunting in season. There is also rock climbing available in the area.

The park trails, overlooks and grounds are open during daylight hours and the visitor’s center is open daily from 9:00-5:00 p.m. After Memorial Day until Labor Day, they stay open until 6:00 p.m. It is closed on weekends and holidays after Thanksgiving until March.

Located 18 miles west of Fossil on OR Route 218

The Palisades Trailhead – This is located 1/4 mile west of the picnic area along Highway 218.  Three trails begin from this trailhead and there are interpretive signs about the landscape and other facts along the way on all trails.

Trail of the Fossils – This is a 1/4 mile hike and the only trail where you can see fossils in the rocks.  There are hundreds of visible plant fossils from the jungle-like forest of over 40 million years ago in the large boulders below the Palisades cliffs.

Clarno Arch Trail – This is 1/4 mile and a moderate climb which takes you to the base of The Palisades Cliffs directly under the natural arch that was cut into the cliff by erosion.  Petrified logs are visible in the cliff face.

Geologic Time Trail– This is a unique trail 1/4 mile each way and connects the picnic area to the trailhead.  This trail symbolizes a timeline.  The signs note prehistoric events over the last 50 million years.  Each 1 foot of the trail represents 37,000 years and the trail can be started from either end so you go backward or forward in time.

If you are looking for a unique area to visit, Central Oregon has a lot to offer and the John Day Fossil Beds is an excellent area to explore.

The unique topography and geology of the area makes it a natural wonder and if you get tired of that aspect of it, there is always the recreational benefits offered by the area and its mostly sunny, warm climate. 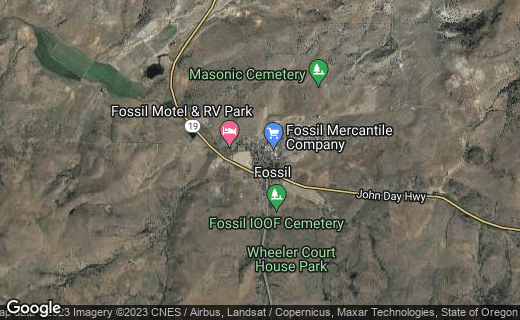