The magical Sea, Salt and Sails Festival in a quaint fishing village in Cornwall.

A Cornish Festival of the Sea

Penwith is the area right at the end of the Cornish peninsula, the area where the land ends and there is nothing between Britain and America but the wide Atlantic ocean.

It is a land of outstanding beauty where windswept granite moorland is cut into by deep valleys of luxurious and exotic greenery that lead down to sandy, rock strewn coves.

Sometimes the coves are hidden, at other times they shelter tiny, quaint fishing villages. One such village is Mousehole, or Porth Enys to give its correct, although now unused, Cornish name. Every two years this scenic village hosts its very own Festival of the Sea.

The Sea, Salt and Sails Festival is a time of wild and jovial celebration of a living made by, and from, the sea. It is a truly Cornish festival held by the Cornish for the Cornish but as always, in the true spirit of Cornwall, all comers are welcome to join in the fun.

The Penwith area of Cornwall 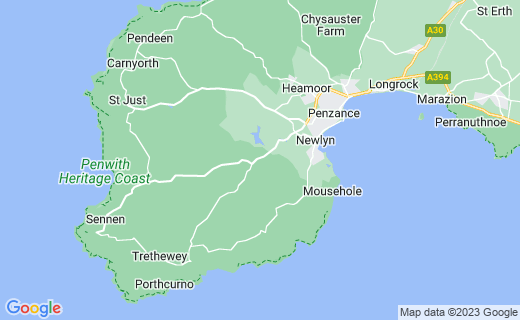 Dressing the village for the festival.

Like many of the Celtic societies that inhabit western seaboards life has always been sustained by the sea. It was then, and still is now, a peculiarly hard and dangerous life.

But for three riotous days in mid-summer the occupants of Mousehole forget the hardships of past and present and enjoy themselves with abandon.

The village is carefully dressed for the occasion with flags and pennants and multi-coloured bunting flutters above every winding street.

Brightly coloured flags and banners are very much a tradition of every festival at this remote end of Cornwall and are usually made of silk as it not only flutters gracefully but, because of its silkiness, it does not suffer from as much wear in the sometimes gale force winds as other fabrics.

Despite this most of the flags and banners are often pretty tatty by the end of the summer so new ones are designed and made every year.

Cornwall: celebrating the sea and boats.

For a week or two before the festival begins visiting boats start to seek sanctuary in the tiny harbour.

Ancient, revered luggers with their red sails furled tie up beside old and much loved trawlers that have been reconditioned as sea-going homes and expensive yachts moor incongruously alongside tiny toshers (small sailing dinghies) until the harbour is full.

It's very much a case of first come, first served and latecomers have to moor round the headland in the bigger fishing port of Newlyn.

Then with flags waving, the boats nudging against each other gently in the water and gaudy stalls selling everything from stripy Breton jumpers to kippers, the vicar opens the festival with a few jokes (yes, vicars do that here) and the celebration begins.

The Cornish love music and song.

The Cornish people have always had a long tradition of making music and singing. The joyous abandon of everyday inhibitions is one of the most seductive aspects of all Cornish festivals ... as well as the freely flowing beer and wine.

Many villages even have their own male voice choirs and Mousehole is no exception.

The Mousehole Male Voice Choir has been going for over a hundred years and enjoys any opportunity to sing whether it's in the pub, the chapel or on the quayside as they do during the festival.

Traditional music of all varieties is always in the air at festival time and being audible all over the village one is irresistibly drawn to seek out the sound.

From unaccompanied sea shanties to Cornish bands playing traditional instruments there is always the urge to join in a chorus or tag on the end of the serpent dance as it weaves its way intricately around the quay.

There has always been a very strong bond between Cornwall and Brittany just across the English Channel in France and this shows very much in the traditional music and dance as shown in the video below.

Cornish music by Dalla (Cornish for dazzle) and serpent dance.

From luggers to lifeboats.

The Sea, Salt and Sails festival highlights many of the old skills of a fishing village and its inhabitants, so it is still possible to watch a lobster pot being made or see how mackerel are smoked.

The luggers and pilchard drivers are old fishing vessels with large, rusty red sails, and they are put through their paces, over the harbour wall, in Mounts Bay.

As in the old days they are still capable of racing one another to show off the speed and manoeuvrability that enabled them to vie for the place of being first back to harbour with a catch.

Modern diesel power however is very much on display in the Penlee lifeboat. The Cornish community is very proud of its lifeboats and the remarkable men and women who crew them voluntarily.

So the present lifeboat, Ivan Ellen, moors alongside the harbour wall to be explored and admired when there isn’t a ‘shout’ as callouts are called.

She’s also eager to demonstrate her skills out in the bay ... if they can find a crew member willing to brave the cold water and float about waiting to be rescued.

The welcome of the Cornish.

As always in Cornwall children are an essential part of this maritime festival and there is always a rush to dress up as pirates complete with eye patches and wooden swords.

Others listen open-mouthed to story tellers as they sit on the tiny, sandy beach having bright ribbons braided into their hair and their faces painted as tigers or wizards.

And of course there is always food, most particularly a local artist's own version of paella made from potatoes in an enormous round pan and dubbed tatie-ella.

With the addition of peppers of various colours, onions, garlic and no doubt other more secret ingredients it attracts its own serpent as the waiting queue winds across the quayside and along the street.

Closing the Festival until the next time.

Only at the end of the third day, on the Sunday, as the sun sets over the headland, is it time to rein in the wildness. Then it is time to become more reflective and to observe the more spiritual, perhaps truer, aspect of the Festival.

Two of the much-loved local vicars hold a short service to Bless the Boats and all those who sail in them. Heartfelt prayers are said and the male voice choir leads the assembled audience in the final hymn.

Significantly no-one leaves, no-one sneaks away, everyone is absorbed in this deeply meaningful ceremony at the end of all the jollity and fun.

This indeed is a way of paying respect to all those who not only risk their lives at sea to feed the rest of us but also a way of remembering all those who have gone before in other times in pursuit of the same goal.

Here, in Mousehole, at the going down of the sun, they are all remembered.