Mousehole - the quaint beauty of an old fishing village in Cornwall.

The loveliest village in England.

The Welsh poet, Dylan Thomas, with his lyrical command of the English language, lapsed into uncharacteristic predictability when he came to stay in Mousehole (pronounced Mowzel) for his honeymoon in 1937, calling it 'the loveliest village in England’.

Many, many people have agreed with him over the years since then.

The correct name, now lost in the mists of time, for this quaint fishing village on the edge of Mount's Bay in Cornwall, is Porth Enys which is Cornish for 'the cove near the island'.

The island in question is St. Clement's Isle, which is little more than a tiny pile of rocks acting as a sort of unofficial breakwater just off the harbour entrance. Despite its small size it has the reputation of having once been the refuge of a hermit.

Watching as the waves crash relentlessly over this small island it occurs to the viewer that he must have been an eternally damp hermit.

As to when some ancient wag gave the village the nickname of Mousehole, nobody now knows, but it is a name that has stuck and it comes as some surprise to most people that it ever had any other.

Mousehole, in the far west of Cornwall. 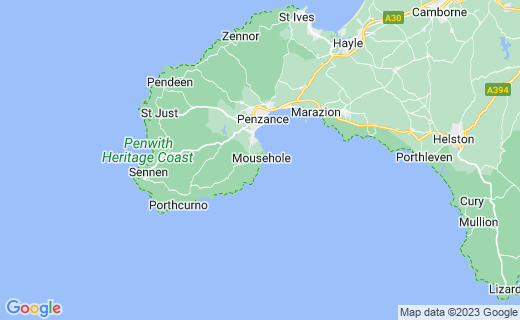 In 1595 a passing band of marauding Spaniards, bent on a bit of mischief against their eternal enemies the English, landed and burnt the village of Mousehole to the ground.

The only exception was one fine house that still stands in the middle of the maze of narrow streets and alleyways.

The Keigwin Arms, with its granite pillared portico, was an inn in those days and the local Squire was killed as he tried to defend both it and himself. This tragic event is now commemorated by a plaque on its outside wall.

In those days Mousehole would have been an obvious target for such a raid as it was one of the main ports on this part of the coast and held various fairs and markets which attracted wealth.

The pilchard … another sort of wealth.

By the 19th century Mousehole had become a simple fishing village, one of the many Cornish villages that lived on the silver wealth of pilchards.

Old photographs in the local Ship Inn show the tiny harbour tightly packed with the red-sailed luggers and seine drivers that caught the fish and brought them back to port.

Every cottage had a pilchard cellar in those days where the local wives would gut and pack the pilchards in salt for export or selling 'upcountry'.

It was a hard and dangerous life for the fishermen and the fishwives could be loud, tough and even violent making Mousehole a very different place to now.

It may seem a sad fact to some that today Mousehole has become a victim of its own beauty.

The jumbled cottages, heaped up around the narrow, winding, cat-filled streets, are often second homes and holiday cottages and the pilchard cellars have been put to use as kitchens or 'boot rooms' full of wetsuits, surfboards and sandy sandals.

In summer, visitor's cars squeeze down the streets to the tiny car parks on the old quaysides so that their children can play safely, clustering as thick as ants on the small, sandy beaches inside the harbour walls.

The sea here is so clear and shallow that it is possible to see the sandy bottom and when the tide goes out there is only a placid pool left right in the harbour mouth, looking as though someone has just pulled out the plug.

Whilst some might bemoan the visitors it is a fact that they do enable the locals to make a living for a great part of the year … and they add life and vibrancy to what would be a very quiet village.

A place for year round tourism.

Some tourists still come in winter. Those who like the peace of the village when it is all but deserted and reclaimed by the locals. For these visitors winter adds another dramatic dimension, especially when the storms come.

In October 'baulks' (huge square timbers) are lifted by crane and slotted into metal grooves on the ends of the facing quaysides making a wooden wall that blocks the harbour entrance until March.

This bears the brunt of the fury of the winter seas and protects what few boats have been left in the harbour for winter. This precaution is not totally infallible however as when the sea is really wild it simply pours over the tops of the harbour walls instead.

The locals say that when the water coming over the harbour walls is white things are not too bad but when it's 'green' (i.e. in enough quantity to colour it) that's the time to worry.

When this happens the boats sheltering in the apparent safety of this tiny basin can still be sunk.

The autumn storms on this south facing coast can even destroy the little wooden boats that have been taken out of the water and beached in the car park for the winter.

The bravery of Mousehole men.

On the outside wall of the Ship Inn is a plaque to the memory of the Solomon Browne lifeboat disaster of 1981.The lifeboat was kept at Penlee Point just outside the village and the eight man crew were almost all from Mousehole.

On December 19th 1981 the lifeboat was launched to go to the aid of the stricken MV Union Star as she foundered east of Wolf Rock off Lands End. The winds were hurricane force 12 gusting up to 100mph and the waves were 18m high.

The last radio message confirmed that they had rescued four of the crew from the vessel but it was to be the last thing that was heard from them.

The other Cornish lifeboats that had also tried to go to their aid had either been unable to make any headway in the storm or had sustained damage and had to limp home.

An Air/Sea rescue helicopter from RNAS Culdrose had been unable to winch anyone from the stricken ship because of the violence of the sea but they saw the lifeboat turn back in the darkness heading back towards the vessel.

The aftermath of the Penlee lifeboat disaster.

The wreckage of the lifeboat was later found and the Union Star, completely overturned, was found aground on the rocks. There were no survivors and some of the bodies were never recovered from the sea.

The old lifeboat house was closed and the surrounding land on Penlee Point made into a memorial garden. Mousehole still mourns the loss of their brave lifeboat men every December 19th.

But such is the spirit of the people of Mousehole that within a day of the disaster, unwilling to leave the coast without a lifeboat even for a few days, they had found enough volunteers to crew a new one.

This new lifeboat, a state of the art Severn class, is still known as the Penlee lifeboat but it is now moored in the safe harbour of nearby Newlyn and has the support of an Atlantic 75 inshore (RIB - rigid inflatable boat) lifeboat.

The crew, like all lifeboat crew, are just as dedicated and just as unbelievably brave as that lost crew.

Living with their history.

Despite the reminders of their past being evident on every corner, the always-enterprising residents of Mousehole and the 'off comed 'uns' (the new residents), have now embraced tourism as a way of earning a living.

Visitors are made very welcome with the usual mixture of Cornish warmth and easygoing good humour.

It is easy now to stay here in the comfort we all expect these days but take one step down an old alleyway and you have taken a step back in time.

For those of you who would like a taste of what it is like to live in and around Mousehole see my romantic novel The Catalyst.

Places to stay in Mousehole: