Just south of the three-corner area where Utah, Wyoming and Colorado meet, lies Dinosaur National Monument. Here the Green and Yampa rivers join at Steamboat Rock to flow south hundreds of miles all the way to the Colorado River. This grand confluence of rivers is in Canyonlands National Park, Utah.The rivers within Dinosaur National Monument have cut deep into the150 million years old Morrison Formation of the Jurasic Period when the dinosaurs roamed. Thousands of dinosaur skeletons have been exposed as a result of river action.

As a young bachelor back in 1959, I wished to explore this National Monument by driving west of Maybell, Colorado to follow a winding dirt road for thirty-five miles toward the Yampa River entrance through a gateway of red, rocky cliffs. I remember passing a sign with a warning--4 Wheel Drive Only Beyond This Point! Not to be deterred, I continued over jutting rocks and potholes until my 1950 Ford felt like it was going to split in half. Suddenly two ruts the size of small ditches filled with water appeared ahead. I backed up the car, got up speed and skidded through muddy ditches at 45 miles per hour. I almost lost it but roared out onto hard sand and drove up into a cottonwood grove beneath bloody red cliffs where the Yampa River entered Dinosaur National Monument.

Despite the gnawing worry of getting back out to the main road, I became entranced by the immensity of the hollow depths ahead of me and the echoing sounds of ravens cawing deep within the canyon. I couldn't help but notice bright red-flowered strawberry cactus lining the desert floor. Suddenly a disturbing rumbling sound grew louder and louder--my first thought was that an earthquake was about to take place. But when I saw a flank of canyon lit up by lightning for a split second, I knew that a thunderstorm was about to explode around me. My only hope was that I should leave immediately without the slightest hesitation.

As I backed up my car, thunder boomed and echoed deep with Yampa Canyon sounding as though dinosaurs were having a battle. If ever I felt like a modern intruder in prehistoric times, it was then. This time I had a level 100 yards (meters) to gain speed and easily (well not too easily) splashed through the muddy ditches that were pelted with tiny drops of misty rain from the approaching storm. I succeeded in outrunning the storm and arrived at hardtop road (U.S.40) to continue on to Vernal, Utah and the Green River Canyon campgrounds.

Before coming to Dinosaur National Monument I had read John Wesley Powell's Exploration of the Colorado River and its Canyons (1895) ) in which he describes his 1867 exploratory expedition of the Colorado: "Lying down, we look up through the canyon and see that only a little of the blue heaven appears overhead--a crescent of blue sky, with two or three constellations peering down upon us. I do not sleep for some time, as the excitement of the day has not worn off. Soon I see a bright star that appears to rest on the very verge of the cliff overhead to the east. Slowly it seems to float from its resting place on the rock over the canyon....I almost wonder that it does not fall."

That evening, I slept outdoors where the Green River exits the canyon. I, too, could hardly get to sleep after the excitement of the day. Stars floated in the sky. I finally fell asleep seemingly to wake up minutes later at sunrise to see the cliffs illuminated so brilliantly I thought I was on Mars.

Dinosaur National Monument's main entrance is just outside of Vernal, Utah on U.S. 40. I first visited this place at age 21, young and foolish. 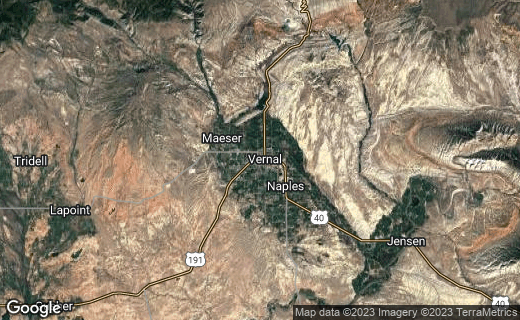