On September 6, 1781, regiments of British soldiers under the command of the American traitor Benedict Arnold landed on the shores of the Thames River in Connecticut. The British under Arnold quickly overran revolutionary forces at Fort Trumbull and burned the town of New London. Their only opposition was a force of 200 or so patriots across the river at Fort Griswold. Today, Fort Griswold is a state park and battlefield, offering visitors a glimpse into the reality of warfare in the American revolution.

Fort Griswold's battle is one of many small events all but forgotten in the story of a major conflict. The Americans under Lieutenant Colonel Ledyard fought valiantly and repulsed two waves of British charges, but were emboldened when they were able to shoot down the halyard on which the American flag flew. A subsequent attack was successful, and despite sustaining fierce casualties, the British were able to open the fort's gate and take control of it. Lt. Col. Ledyard was killed with his own sword after surrendering; thus the battle was labeled a massacre by the Americans.

Fort Griswold was kept as an active fort through the American Civil War. In 1953 it was turned over to the state as a park. Today, it is a Connecticut historic archaeological site, museum and memorial.

The park is divided into three parts: the museum & memorial, the upper fort and the lower fort. The museum features items recovered from the archaeological excavations as well as china, furniture, clothing and other household items from the contemporary time period. The Groton Memorial tower is a 135 foot tall stone tower run by the Daughters of the American Revolution, and open during the summer for visitors brave enough to climb the 166 stairs to the top.

Across the street from the museum is the fort itself. Fort Griswold's stone walls and wooden palisades are long gone but the pentagonal star shape is still preserved by earthworks and wild grasses teeming with butterflies. The spot where Col. Ledyard died is marked by a marble plaque. Passing through a low stone doorway leads to a sunken walkway connecting to the lower fort, where soldiers would have been protected from enemy fire. You can now follow this walkway yourself to the lower fort, where outbuildings from the 1840s and cannon mounts remain.

Fort Griswold Battlefield is located in downtown Groton, Connecticut. From I-95 take exit 87 to Clarence B. Sharp Highway. Turn right on Meridian St. and left on Mitchell St. Take second right onto Park Avenue and follow to the park. 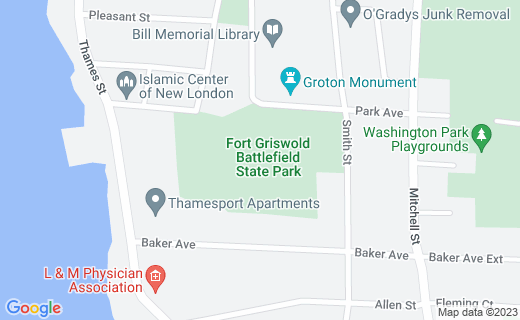