A Unique Retreat in Waterford, CT

When travelers think of Connecticut, the mental picture is most likely the hallowed halls of Yale, urban sprawl of the New York City suburbs or delicate white sailboats in a rocky harbor. All of these images can be found in the state, but what is not common knowledge is the abundance of interesting, historic and well-maintained state parks throughout Connecticut.

Harkness Memorial State Park is located in Waterford, Connecticut. This southeastern small town is home to other historic sites, such as the Eugene O'Neill theater, and is a center of shopping and entertainment as well. Harkness is the jewel in Waterford's crown, located on the coast some two miles from downtown. Once the summer retreat of the wealthy Harkness family, the land and it's Eolia mansion offer stunning views of Long Island Sound, Fisher Island and the Connecticut coastline.

Set on over 230 acres of land, Eolia was constructed in 1906 and named for the Greek god of the winds. Remnants of the working farm are evident as the grounds boast barns, stone-wall- bordered fields and a now abandoned greenhouse. The mansion consists of 42 rooms, and is available for public rental. It has become a popular site for weddings and receptions. In addition to the main building, there is a large carriage house now utilized as a seasonal gift shop and rich gardens with a faint Asian flair.

Eolia was purchased by Edward and Mary Harkness in 1907. The Harkness family generated their fortune from investments in the Standard Oil company, and spent most of their life engaged in charitable acts. Through the 1910s to 40s, Edward Harkness would donate over 120 million dollars (over 5 billion dollars in today's money) to activities ranging from medicine to the arts. Of special interest to Mr. Harkness were colleges, and schools such as Columbia, Oberlin, and Connecticut College as well as Brown, Harvard and Yale were beneficiaries of his generosity. After Mary's death in 1950, Eolia was left to the state as a park, and in 1952 it joined the Connecticut park system.

Today, in addition to hosting guests in the mansion, Harkness also serves as a bird sanctuary and habitat. The estuary located on it's western border attracts a variety of species, including woodcocks, swans, egrets, and especially great blue heron. Heron nesting platforms have been placed in the estuary and a specially constructed viewing shelter allows visitors prime observational angles of these magnificent birds. Smaller species frequent the park in abundance, including cardinals, chickadees and goldfinches.

No park is complete without space for activities, and Harkness provides this in abundance. Although there is no swimming here, a boardwalk provides access to a narrow sand and rock mix beach, ideal for walking and play. Large lawns provide ample space for kites, a popular activity judging by the few claimed as trophies by tall trees. Maintained gravel and mown grass paths offer several miles worth of circular walking and biking trails. There are dozens of picnic benches and public grills, and public restroom facilities are provided. Fishing is another popular pastime at Harkness, with night fishing available provided fishers use the exterior parking lot. Wildlife watching includes birds and small mammals as well as the occasional deer. During the summer, there are also tours of the mansion and it's grounds, as well as the gift shop which features crafts, ornaments and décor any garden enthusiast is sure to love.

Harkness Memorial State Park is located at 275 Great Neck Road. From east or west, take I-95 to exit 75, Boston Post Road Rt. 1. Turn right on Avery Lane (becomes Great Neck Road) and follow to the park. There are brown guidance signs along the route to assist you. 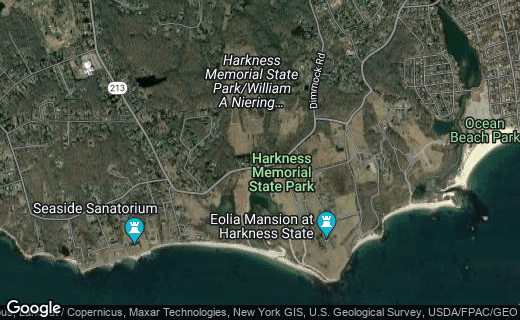