Belfast, Ireland is considered as one of the best places to visit in Europe. Not only because RMS Titanic was built in this city, but also the place offers its rich history to the tourists. Presented below are Top 8 Must Visit Places in Northern Belfast:

Harbour Commissioners Office is the official headquarters of Harbour Board for more than 150 years. It was designed by George Smith and was built on William Ritchie’s shipyard in 1852. The board is led by Ulster Scots of Belfast to develop the port infrastructure of the city.

Found inside the Harbour Office are the following:

Clarendon Dock is a part of the earliest port infrastructure of Belfast, which was built in 1796 by a shipbuilder named William Ritchie. It was then recognized as the #1 graving dock, which is located beside the Harbour Office.

Custom House is one of the finest public buildings in Belfast in 1857. This Italian style building was designed by Charles Lanyon, a famous 19th century English architect. During the Victorian era, the construction of the building showed the affluence of the business community of the area. Found inside are the sculpted images of Britannia, Mercury and Neptune.

Did you know that Anthony Trollope, the 19th century novelist, worked in Custom House as a Post Office Surveyor?

Donegall Quay is the first ever quay in Belfast lies on the Southern part of River Farset or now known as the High Street. The quay was built by David Tomb in 1804. It was then the place of embarkation and disembarkation of passengers, goods and livestock from different ferries to all over Britain.

Presbyterian Church is the oldest worshiping ever survived in Belfast. The first structure of the church was built in 1695, then was eventually replaced in 1783. The interior of the church presents detailed wooden carvings, remarkable stained glass windows and typical box pews.

One of the most famous member of the congregation on his time was Edward Harland, the owner of the leading shipbuilder in Belfast. Even the family of Thomas Andrews, the designer of RMS Titanic, actively worshipped in this church.

Seamen’s Friend Society of Belfast developed the congregation. The church was named after John Sinclair, a rich merchant and philanthropist. John is the brother of Thomas Sinclair, who donated 1000 pounds for the construction of the congregation’s meeting house. The seamen’s church became well known for its interior nautical features, which include a nautical themed stain windows, ringing bell, ship’s wheel and ship’s bow attached in front of the pulpit. There is no admission charge when visiting the church.

York Road or York Street is located in the heart of the Maritime Commercial District of Belfast. The mural in York Street shows Scottish migrants of Northern Ireland and famous firms established in Belfast. The artwork is painted on a Victorian railway building connected to York Street Terminus and Northern Counties Railway. 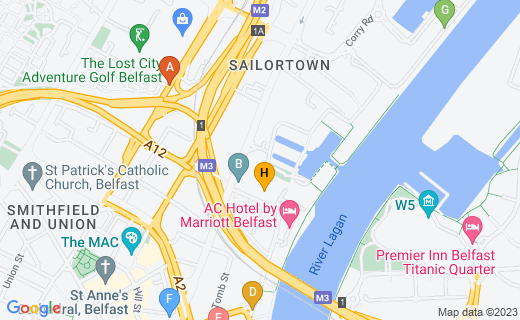 Explore Other Places Around the World