Newquay Airport is just outside of the town by a few miles to the north. It's a small airport, hardly larger than one room - and with one plane landing at a time - although it does handle nearly 500,000 passengers each year. The runway itself is one of the biggest in the world and can land any plane, no matter how large, so it can be used as an emergency landing strip for any plane in trouble.

Until recently, Newquay Airport was owned and operated by the local RAF St Mawgan. When the RAF started to withdraw, Newquay Airport was considered so important to the economy of the county that Cornwall Council took it over, in order to develop it. The long-term plan being that at some future point a willing investor would be found to take ownership of it, at which time the Council would sell it on.

Airlines With Flights to Newquay Airport

The flights change too often to be able to realistically update this information.

There were a lot of changes in 2010-2011 with Newquay Airport and the airlines that flew there. AirSouthwest withdrew all flights and Flybe stepped in to provide a broader service. Some services are summer only.

As flights to and from Newquay are seasonal and changeable, it's always best to double check the latest information with the airllines, rather than relying on the list below. News announcements can come at the drop of a hat and services withdrawn.

There have been further changes and it's something that needs checking almost daily, so this information isn't here any longer.

Once you've landed, you'll need to get to your destination. Because of the variable flights, flight times and changeability of airlines using Newquay Airport, it's not on a regular bus route and so you do need to think how you're going to get from the airport to anywhere else.

The nearest railway station is Newquay Railway Station, with daily (but limited) branch line trains which will get you onto the mainline railway line through Cornwall. The nearest mainline stations are St Austell (16 miles) and Bodmin Parkway (22 miles).

There are 544 car parking spaces at Newquay Airport, there's also a dropping off and picking up area in the car park.

There are three car hire offices at Newquay Airport:

Taxis for Flights to Newquay Airport

It's roughly 6 miles from Newquay airport into Newquay itself. You can expect to pay £12-15 for a taxi one way. You will need to book in advance.

The main local taxi companies to call are:

If you're after something a bit special, something a little different, then why not take a tuk tuk ride to your accommodation: Take a Tuk Tuk

Since 2009 a regular bus service has been available at Newquay Airport for flights to Newquay from London Gatwick Airport, before this you'd have to make your own arrangements - a bti of a shock to many people as they assumed any airport would be well serviced!

These services meet the London Gatwick planes only. If the last flight of the day is delayed, the bus will wait up to 45 minutes for it. Newquay airport is on the Padstow->Newquay route.

This service must be booked. It's a taxi-bus (shared taxi) that will collect you from Newquay airport and take you to wherever you are staying. The beauty of this is that if you're travelling alone you get the benefit of a taxi, but are sharing the cost with others. And, they're eco-friendly.

The taxi bus runs twice an hour, at 15 minutes past and 15 minutes to the hour - if a flight's delayed it will wait as long as possible.

How The Airlink Taxi Bus Works

There is an equivalent system and bookable taxi-bus going to Newquay Airport as well. 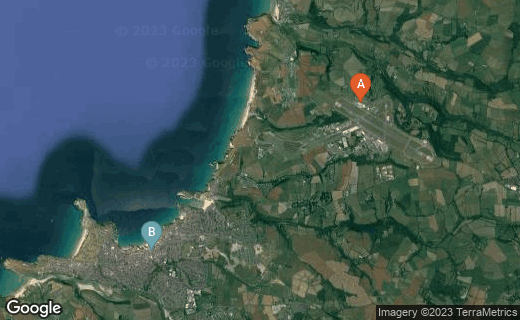 Tips for Flights to Newquay Airport