Frogs that live at a Tenerife restaurant

I had been looking for frogs in Tenerife and now thanks to Pamela Walker, from Los Abrigos, I have found some and they were living at a Canary Islands restaurant. You are probably thinking that the poor frogs were destined to be part of a gourmet meal, but thankfully this was not the case because the frogs live in ponds in the gardens of Las Gangarras in Buzanada.

When I arrived in the town I found the place easily enough, and spotting a man getting out of a car to go inside the gates of the restaurant, I decided to explain I was from the Tenerife Sun and to ask him if I could see the pools with the frogs in. He said I could but I would have to come back at 1pm when it opened.

So having nearly an hour to kill I went walkabout around Buzanada and fell in love with the place. As Swifts swooped in the sunny skies above I found all sorts of wild flowers like the rambling Cornical with its strange seedpods as well as masses of the spiny but pretty Mexican Prickly Poppy, or Chicalote as it is called in Spanish, growing at the roadside.

When the time arrived for Las Gangarras to open I strolled up the drive where I met the owner who showed me around and took me over to where the three pools are situated. He told me that there had been lots of fish there too and big frogs but unfortunately a very large bird that I figured out was a Heron had eaten most of them.

If I was lucky, I might still find some young frogs that the bird had missed, he said, so excitedly I started to investigate the pools and soon saw my first froglet and some tadpoles. I tried to get a picture of the little frog but it was camera-shy and quickly jumped into the water where it vanished.

Groping about with my hands in the waterside plant roots I discovered a dragonfly nymph and managed to get a photo of this strange insect larval form. It is another enemy of the frogs, however, because it lurks in hiding and then pounces on any small living creatures it sees, and a tadpole makes an ideal meal.

Nevertheless, all animals have to eat something and I returned the nymph to the pool, and after a bit more looking around and trying to be as quiet as possible, I succeeded in getting a picture of my first Tenerife frog. This was a moment I had been waiting for ever since I arrived on the island, and seeing this little amphibian up close really made my day.

It was a juvenile Iberian Water Frog, which as the name suggests also live on the Spanish mainland, where the species may have been introduced from. The adults get bigger than the British Common Frog and, in Tenerife, due to a lack of natural freshwater habitats they are more or less confined to reservoirs, irrigation tanks and garden ponds like the ones at Las Gangarras.

Having completed my quest of finding a frog I was feeling hungry and went into the restaurant to have a meal. I decided on Revuelta con Champiñones (scrambled egg with mushrooms) and was really pleased to find the eggs they use are free range, which have so much more flavour and which mean that the hens have a much better life than so many today kept in factory farms.

The owner of Las Gangarras told me they had 24 hens there and asked me if I would like to see them. Of course I agreed and he got his gardener to take me to where the birds were living.

The gardener put down his wheelbarrow and got some food out for the hens. They all ran up clucking and left off picking around in a weedy patch of ground where they had been until we arrived.

On the way to see the hens we passed the vegetable and fruit plots where they grow a variety of crops such as grapes, bananas, beetroot and maize. We passed some outhouses too and I spotted a lizard running across the roof of one, and another on a stone wall, and I love seeing lizards.

I had spent a really enjoyable time in Buzanada, so much so that I am actually considering moving to the town. A publicity flyer for Las Gangarras restaurant calls it "A different place," and I would agree - where else can you enjoy a drink and a meal whilst watching frogs in ornamental pools?

Footnote: Originally published in the Tenerife Sun newspaper in 2006 as At Last My Quest for frogs is over! 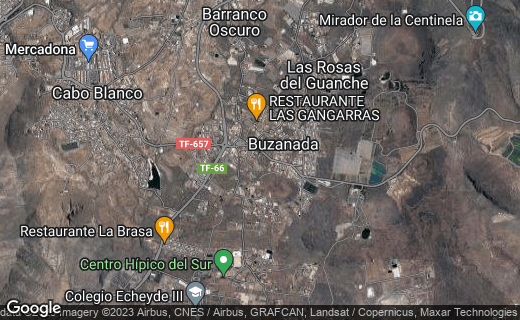