Sometimes the best trips are those with no itinerary and no plans, just a few days to explore and to delight in the surprises that await around every bend in the road. That was the case with a trip my husband and I took up the New England coast one August.

Our flight into Boston's Logan International Airport was delayed, and we drove to Cape Ann in the dark during a rainstorm. The only thing on the schedule was our return flight home several days later. Our destination was Acadia National Park in Maine. With just a road map and a beat-up AAA guidebook to show us the way, we took a couple of days to meander up the New England coast on Highway 1. If there was a Route 1A spur, we took it. If we reached a dead end on a barrier island, we turned around. We explored lighthouses, kitschy beach towns, and hidden coves.

Here is a chronicle of our journey in photos.

We awake to see the sun rising over the Atlantic from our room at the Captain's House Inn. The twin lighthouses on Thacher Island have been guiding ships past the dangerous rock mass since 1771. The 45-foot towers were first American lighthouses built to serve solely as a warning to ships and not to mark a harbor entrance.

Our journey up the New England coast begins in Rockport, Massachusetts. The patchwork of shops and lobster shacks lining the weathered streets captures the town's various incarnations as fishing village, granite shipper and art colony.

Known as Motif No. 1, this lobster shack in the middle of the Rockport Harbor is one of the most painted and photographed buildings in the world.

The day turns hot as we head north. Surfers ride the waves along the New Hampshire Coast.

Families enjoying one last weekend at the shore before school starts call it a day in Hampton Beach, New Hampshire, as the sun sets behind them. As the beach empties, the arcades, soda shops and souvenir stands along the boardwalk buzz with tourists.

The coast of Maine

The Nubble Lighthouse sits just off Cape Neddick, Maine, and has guided ships since 1879. The island's nickname "Savage Rock" belies its postcard-perfect setting.

The seven-mile stretch of sand in Old Orchard Beach, Maine, invites us to kick off our shoes and wade into the surf as we enjoy an ice cream cone from a shop on the boardwalk.

We pull into Boothbay Harbor just as the sun is setting. We are fortunate to find a room on the water with incredible views of the harbor and village.

A springer spaniel named Spot is buried at the base of Owl's Head Light. Local legend has it that during a terrible storm, with the foghorn broken and the light unable to pierce the dense fog, Spot's loud barking enabled a mail boat to steer clear of the jagged cliffs.

At the southwest point of Mt. Desert Island, the Bass Harbor Lighthouse has guarded the entrance to Bass Harbor and Blue Hill Bay since 1858.

The Precipice Trail's strenuous climb nearly 1,000 feet up the sheer granite face of Champlain Mountain is not for the faint of heart.

After a challenging hike, oven-fresh popovers and fresh-squeezed lemonade are a welcome treat at Jordan Pond House.

The summit of Cadillac Mountain, the highest peak in Acadia and on the United States Atlantic coast, offers views of Bar Harbor and the Porcupine Islands below.

Many of the giant mansions built along the shore in Bar Harbor as summer "cottages" for wealthy Bostonians and New Yorkers have been converted to guesthouses, like the Moseley Cottage Inn, built in 1884, where we stayed for three nights.

Low tide arrived at sunset, allowing me to capture this photo from the middle of Frenchman Bay.

Our journey along the New England coast 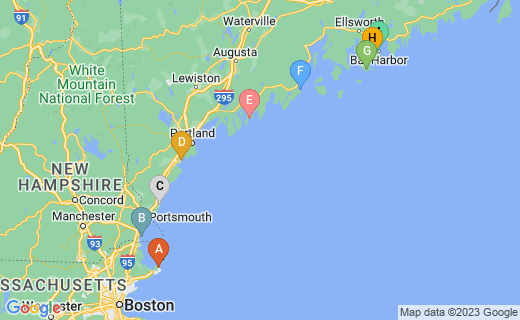 Read more about the places we visited 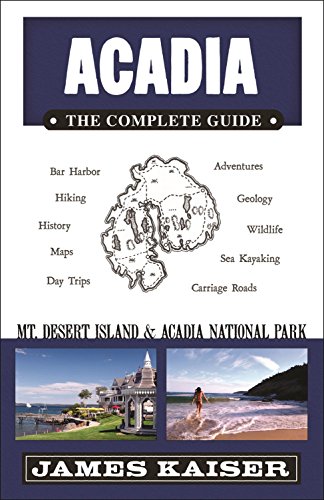