Public apple picking at rock-bottom costs occurs every fall at a National Park Service historic site in the southeastern Pennsylvania. Truly, it is not the first activity one seeks when surfing what is available at any of the 89 national historic sites, 45 national historical parks, battlefields, or recreation parks administered under the aegis of the U.S. Department of the Interior. Nonetheless, scores of visitors “interact” with the apple trees each autumn at Hopewell Furnace National Historic Site.

Although the physical address is listed as being in the town of Elverson, the site really sits out in the middle of rural nowhereland west of Pottstown and south of Birdsboro. A helpful landmark is the Pennsylvania French Creek State Park which abuts it. This historic site is the restoration of the industrial iron-making company town which supported the American Revolution and the growth of the new nation. It fell into disuse as technology advanced and the furnace could not stay competitive. 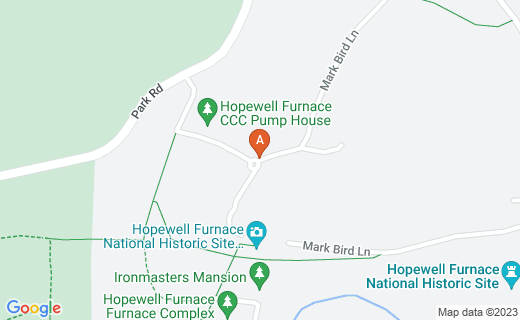 The Hopewell Furnace official webpage describes itself as an 848-acre site which illustrates the “…early American industrial landscape from natural resource extraction to enlightened conservation. Operating from 1771-1883, Hopewell and other ‘iron plantations’ laid the foundation for the transformation of the United States into an industrial giant…”

Apple picking here contrasts strongly with choosing which apples to buy at a supermarket. For a visitor with neither farming nor “old orchards” experience, it is a big step into living history. A large part of the attraction are the heritage and heirloom varieties of apples at Hopewell Furnace. Although none of the trees are the original three hundred years old ones from when the furnace was active (the site and the orchards were restored in the 1930’s by the Civilian Conservation Corps), some of the varieties are documented strains from the early 1800’s. They sport strange names such as Turley Winesap, Tompkins King, Ashmed’s Kernal, Duchess, Rhode Island Greening, and York Imperial. The fruit is smaller than expected and often misshapen with a defect or two. Furthermore, this year with the heavy rains of Hurricanes Irene and Lee, the apples have faint gray marks of fungus. It is definitely different from the uniform, shiny look of grocery store produce. They are completely safe for eating after washing. The webpage link for the apple picking days explains:

“Older orchards characteristically had large trees. Modern trees are intentionally dwarfed so that they are easier to manage.

“Orchard spraying did not become common in Pennsylvania until after 1889. Until that time pest control was limited and losses were high. The National Park Service recognizes the potentially harmful effects of pesticides and strives to reduce or eliminate their use. Hopewell Furnace NHS attempts to control pest and disease damage in the orchard by pruning to allow more rapid drying of trees, timing spraying with the weather and tolerating more fruit damage than a commercial orchard would. A portion of the orchard's crop will show insect damage and/or discoloration from harmless fungus that effects only the appearance of the apples.”

The excitement begins as one sees others out among the widely spaced trees. As described above, these are full-grown “climb the tree in the backyard” height. However, during picking time, each has a wooden plaque bearing its varietal type. The park provides a map identifying the variety of each tree and a plastic bag-lined bucket which looks like a ten-gallon industrial paint bucket. Outside the visitors’ center are racks of picking poles from which to choose. These strange implements resemble broomsticks (some extendable) with a wire lacrosse-sort of basket at the end. The upper lip of the basket bends sharply in, which becomes very useful for the actual fruit plucking.

Tree with Plaque and Picking Pole

I chose to pick on a special event day in which many volunteers wandered around making apple butter and baskets the old-fashioned way or guiding a huge friendly draft horse pulling a wooden sled. Colonial dancers demonstrated in the barn and the anticipation ran high.

No one seemed to feel that instructions were needed for using the picking pole, but it did require trial-and-error until I developed a successful technique. I learned one must get the basket around the intended apple at an angle that allows (1) a strong jerk to detach the apple from its stem and (2) guides the apple to roll down into the basket instead of hopping somewhere onto the ground. Without intending to brag (too much), I will confess that I mastered capturing two or three apples in the picking pole cage before needing to lower for emptying in my bucket.

At first, I thought the exotic coloring on my harvested apples was attributable to the unfamiliar varieties I obtained. After reading the guidelines from the rangers about washing to remove the fungus, dirt, and scale, I decided to gently scrub until nothing more came off. Thus, I learned that my historic and heirloom collection looked more similar to apples I buy at the grocery. Once home, I scrubbed them all and so far I have made a tangy batch of applesauce in the crockpot. Coming up: apple crisp and apple pie!

I realize not everyone lives within convenient driving distance of Elverson, Pennsylvania. Nevertheless, perhaps this article will entice you to find a local apple picking orchard. Additionally, maybe the state or national parks near you have special seasonal harvests which the public can enjoy.