Wayne Ruple has been writing about travel for several years and many of his videos can be found on YouTube.

Helena Alabama is located south of the state's largest city. 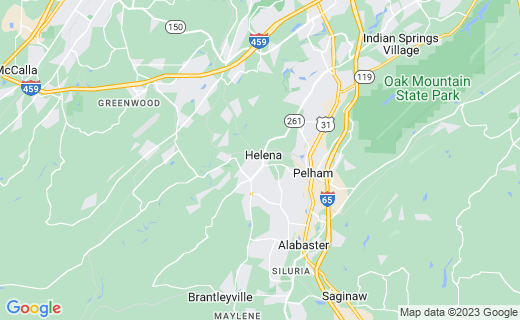 Beginning in 1849 the town was known as Cove and at that time was nothing more than a cross-roads stage stop.

In 1856 the name changed to Hillsboro and became the site of a very productive rolling mill manufacturing material for the the Confederacy during the Civil War.

The mill was actually classified as "top secret" and continued to operate until 1865 when Wilson's Raiders (federal troops) raided the plant and burned it to the ground.

The area saw growth again after the war when the L&N railroad sent an engineer to survey the land and following construction of a new train station, the engineer named the station "Helena Station" after is sweetheart who was the daughter of a local prominent judge.

With the coming of the railroad, the area developed, absorbed Hillsboro and was incorporated as Helena with the railroad agent serving as the mayor..

The old steel mill was eventually rebuilt and reopened and played vital rolls in the development of the steel industry in nearby Birmingham, Alabama.

But in 1920 hard times struck the town again and the coal mines closed their operations as the steel mill moved to Birmingham, businesses closed and people moved away. The highly destructive tornado that hit in 1933 destroyed 110 homes and killed 13 people.

But the people who remained worked and kept the town alive and today much of it has become a tourist attraction that focuses on Buck Creek and the dam.

"Old Town Helena" as now a portion of the town is called, has been restored and offers several unique shops and "quaint" restaurants. It was featured in the "Top Places to Raise Kids,"Business Week 2007, 2008 and the "Top 100 Places to Live in the U.S," by Money magazine.

To help attract tourists and serve locals, the Helena Amphitheater Park was established in 1999 within the district and includes an outdoor concert hall, festival site, movie theater and nature park that is home to numerous events.

An annual Buck Creek Festival is held and the Kenneth R. Penhale City of Helena Museum houses many historic displays and items.

Visitors can leisurely walk through the historic section and visit restaurants and shops along with relaxing on the banks of Buck Creek and listening to the waterfall created by the dam.

There is a nice park on the banks of the creek and after visiting shops and restaurants the outdoors setting can help anyone unwind.

Throughout the year you can catch special events, celebrations and bands as they perform.