Best Places to Retire With a Golf Cart

Money Magazine named Dunedin, Florida one of the best places to retire in America and they have listed the city as a favorite of senior citizens ever since 2010. More senior citizens are moving into the area, including Baby Boomers, many of whom find retirement employment in the area when they want it.

Other recommended favorite communities near Tampa Bay include Tampa, Clearwater, and St. Petersburg; but Dunedin has some fun transportation options that some other retirement cities lack.

Transportation changed for the good in Dunedin during Summer 2011, when golf carts became street legal.

These electric carts make an excellent, sustainable form of alternative transportation for those who no longer drive a car but can handle a cart.

Children can't drive golf carts legally on the streets in this town, but only on specially designated paths, and the carts must be registered and kept on permitted streets. Adults can drive the carts on the streets.

This trolley travels to Clearwater's well known Pier 60 Sunset Festivals nightly and for free movies every Friday and Saturday. Bring a chair and enjoy the tasty concessions!

Dunedin also sponsors the Jolley Trolley that runs from conveniently to Clearwater Beach, Palm Harbor, and Tarpon Springs every Friday through Sunday.

This brings back memories of a simpler time in which residents rode the trolley cars of towns and cities in America to the trolley parks at the end of the line for band performances and picnics.

The Jolley Trolley runs from Dunedin to Clearwater every 30 minutes from 10:00 AM to the 11:30 PM last stop on its scheduled days. From Friday through Sunday, it runs to Downtown Clearwater and the other cities mentioned. The two routes are both run on Sundays. 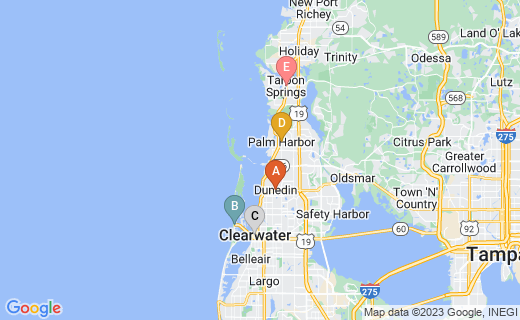 Dunedin is one of the oldest communities on the Gulf Coast of Florida. While not a huge metropolis, this city offers a variety of attractive goods, services, transportation options, and housing choices for people of any age. Families, singles, and adult seniors love this town.

The cost of living here is reported as below the national average by a full 5.9%, which makes the city more affordable overall. Sales Tax is 7% and there is no city income tax.

Sperling's Best Places rates Dunedin within the Top 50 Romantic Places for Boomers and State Farm Insurance rates the city as the Number Three Most Fiscally Fit City (along with the Greater Tampa Bay Area) on its Top 50 list.

A Sample of Best Attractions

The Caladesi Island Ferry runs to and from Honeymoon Island every half-hour beginning at 10:00 AM daily except Thanksgiving and Christmas Day.

The choices of post-secondary school in the Dunedin area is good and these facilities are part of the arts and cultural scenes with their own museums, galleries, and performance arts.

The Greater Tampa Bay Area that includes Dunedin and other smaller towns is one in which a range of jobs are available, many of them well paying.

This type of job market makes Dunedin a good place for any age to settle and make a home. Retirees that want to continue working can find employment here.

Emerging jobs in Aviation and Aerospace Operations advertised include.

Best company for these jobs:

The United States Air Force announced in October 2011 that it was testing its Blue Devil 2 airship (blimp) for deployment to Afghanistan in 2012. Developed by MAV6, LLC the airship is designed to use surveillance items that include wide-area cameras capable of scanning 36 miles2 of landscape at a time.

The prototype blimp was inflated with helium and stored in Elizabeth City, NC by MAV6, LLC and further developed. The Blue Devil 2 is 370 feet long, with a volume of 1.4 million feet3.

The need for pilots in the manned and unmanned program is growing.

Top Hiring Companies for Adults of All Ages

The top companies hiring in the Dunedin area involve Engineering and Aerospace Technologies as well as other technological pursuits: