A vacation in Jamaica is like no other. Sure it’s hot, has lots of sandy beaches, great festivals and exotic food too. What sets Jamaica apart is the language, the people and the music you’ll enjoy live. When you go on a vacation to Jamaica there’s so much to see and do that you’ll never be bored. You’ve heard the negative stuff about the island but open up your mind and find out for yourself.

“Out of Many, One People”, our motto and that’s precisely what you’ll find upon a visit to the island of 2.8 million people. Those born on the island or who call Jamaica home, include Africans, Indians, Chinese, Germans and Latin Americans.

Jamaica has a fascinating history of Spanish and British rule and slavery under the latter.  The Arawak/Taino Indians, a fierce tribe from South America inhabited the island between 4000 and 1000 BC.  They named the island Xaymaca or “Land of Wood and Water”.

This slice of paradise, located in the Greater Antilles of the Caribbean Sea, and south of Cuba is the third largest island and the fourth largest country in the Caribbean.

As with most islands, Jamaicans enjoys a tropical climate with temperate areas inland. It is however located in the hurricane belt of the Atlantic Ocean and has seen its share of damages over the years with hurricanes Ivan, Dean, and Gustav being the most recent.

Jamaicans speak English but also an English-African creole mixture known as Patois(patwa).  Here’s a quick sample.  To hear it spoken is a lesson in listening keenly.

Where are you going? ---whey yuh a-go

Jamaica and specifically Kingston, the capital has been avoided by tourist because of its high per capita killings but there is a lot to see there. It’s divided into two areas, Downtown, and New Kingston. Places and activities of interest include University of the West Indies, Devon House, a mansion with adjoining park that once belonged to Jamaica's first black millionaire, Bob Marley Museum, the ruins of Port Royal and Blue Mountains. 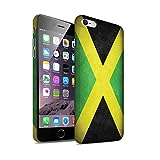 Jamaica’s national dish is Ackee and Saltfish. Ackee is a fruit that has to be used with care. The fruit has to ripen and the pod opened naturally before it can be picked from the tree or else it is poisonous. It’s cooked with saltfish or codfish and then green bananas, dumplings and or plantains can be added and voila a delicious breakfast is served.

Curry Goat Jamaicans love to eat curry goat. Next to Ackee and Saltfish and Jerk Chicken, Curry Goat would probably be number one. It's tender, spicy, succulent and downright delicious with rice and peas. I'm feeling hungry just writing about it. We have our own curry that's just right and it doesn't give you heartburn either.

We use the goat's head to make what's called Manish Water or a soup.

Jerking is a way of cooking pork and chicken which goes back to the Arawak Indians who inhabited Jamaica. “Meat was placed in a deep pit lined with stones and covered with green wood, which, when burned, would smoke heavily and add to the flavor. But first, the meat was "jerked" with a sharp object to make holes, which were stuffed with a variety of spices and which also allowed heat to escape without loss of moisture”.

Irish Moss/Sea Moss/ is a seaweed that's harvested from the sea. It's cleaned, sun dried and made into a drink. Sea Moss called Carrageenan has many uses and is used as an ingredient in many food.

Jamaican, men use it for virility but it has many other uses. It's good for anyone really and when mixed with condensed milk is delicious. You can buy it or make your own.

Directions: Place dried Irish Moss and 1/2 lemon in a bowl of cold water for 8 hours. The lemon takes the fishy smell away. Leaving it in cold water lets it return to its natural way. Remember it was dried out in the sun for a long time so it's tough.

Drain water and rinse moss with other 1/2 of lemon in cold water.

Place moss, cinnamon stick and bay leaf in a pot with 2 cups of water ( enough to cover moss completely)and let boil for about 30 minutes or so on a medium heat. Keep an eye on it so that it doesn't boil over onto the stove. You need the moss to be soft so that you can eventually blend it in your blender. When it's soft it blends easily and there won't be little pieces left in your drink.

Drain water once done. Place moss in your blender with condensed milk, skin milk, nutmeg and vanilla. Blend until smooth, about 30 sec to 1 minute. Chill and serve. Drink at your leisure.

Red Stripe is the local beer brewed in Jamaica.  “It's moderate in body, bitterness, hop aroma and flavour, has a low butterscotch flavour, full bodied and has a smooth post palate sensation.”  All I know is that on a hot day, it goes down easily.

Jamaica Blue Mountain Coffee is grown in the famous Blue Mountains of Jamaica. Its smooth, full bodied taste has made it world class and sought after.

Tia Maria is a coffee liqueur made using Jamaican Blue Mountain Coffee beans.  It has a  smooth coffee taste.  Have it on ice, straight up or with a  dash of milk.

Reggae Music, that driving thumping bass was born here. It grew out of the ghetto of Kingston and is finally receiving some of the glory that it deserves all over the world. Reggae music speaks to the resilience of the people that call JA home, to never give up.

Bob Marley, one of our legends of reggae music who passed on, left an unforgettable legacy.

There are countless musicians such as Jimmy Cliff, Peter Tosh, Morgan Heritage, Third World, and Maxi Priest that have excelled at home and abroad.

DanceHall, another genre of the music has brought up countless artists such as Shaggy, Sean Paul, Beenie Man, Konshenz, Vybz Kartel and Buju Banton.

The Jamaican Bobsled team first came on the scene in the 1988 Winter Olympics as crazy as that seems. They lost control of their sled during the games and walked it across the finish line to astounding applause. They returned again in “92 and “94. They will be in the trials for the Olympics in 2010.

Updated: They were unsuccessful in trials so a great disappointment for the island.

John Candy starred in the 1993 comedy Cool Runnings, as the coach of the Jamaican Bobsled team which was partially filmed in Jamaica.

The late Ian Fleming of the Bond films and famed character 007, made his home here and filmed or used the setting in his movies. He retired in 1950 to his estate named Goldeneye, in St. Mary Parrish in Jamaica. He wrote twelve novels and six short stories that features James Bond.

Usain's first world appearance was in the 2001 IAAF World Youth Championships in Debrecen, Hungary. He ran in the 200m but didn't qualify for the finals however he set a personal best at 21.73 s.

In 2004, he turned pro and became the first junior sprinter to run the 200 m in under twenty seconds at 19.93 s, at the Carifta Games in Bermuda breaking the world junior record.

This small island in the Caribbean has a veritable wealth of people, places, food and a thriving nightlife to discover.

Jamaica is the land of my birth. Come and discover Jamaica. Come for a Jamaican vacation. Come to Jamaica and feel alright!!

One more thing before your go!