No one knows exactly when Lahore Fort was built but it was first mentioned around 1021 AD when Mahmud of Ghazna conquered it. Over the centuries Lahore was conquered many times. Lahore has also been an important city for a long time. The best time for Lahore was during the Mughal reign from 1525 to 1721. Jalal-ud-Din Muhammad Akbar (Akbar the Great) built the present structure as we know it today. Jahangir and Shah Jahan constructed palaces in the Fort and Emperor Auranzeb Alamgir built the Badshahi Mosque which is opposite the Alamgiri Gate of the Fort. This is the huge entrance which has two large pillars which resemble elephants feet.

I visited in November 2008 and at this time of the year the weather is very pleasant. As a result, hundreds of school children go on visits to museums and monuments. Not only schoolchildren but families too. During this time there was a Sikh gathering at the Gurdwara which is next to the Fort and Mosque and there were many Sikhs visiting too.

During the day I was stopped by quite a few people who wanted to talk to me and have their picture taken with me. Pakistanis are among the most friendly people I have ever met.

The journey to the Fort is through busy streets with speeding cars honking their horns every few seconds. There are rickshaws, motorbikes, donkey carts, hundreds of people and lots of noise, but on arrival at the area of the Fort, the noise disappears. Like every park I have visited in Lahore, there is a feeling of calm, tranquillity and peace. There is only the sound of the people talking and enjoying the pleasant weather and the visit to the Fort as I am.

I would have to visit again to fully appreciate the splendour and learn more of the history of the Fort and take more photographs. It is impossible to take it all in at once.

As you can see from the photographs, there is a lot to experience.

The Divan-e-Aam which is the Hall of Public Audience where the King received his subjects and held public gatherings was built by Shah Jahan during 1631 to 1632. Then there is the Ath Dara building with eight openings which was being restored while I was there.

One of the most spectacular parts of the Fort is Shish Mahal or the Hall of Mirrors. This is still very magnificent and one can imagine how much more so in the days when it was first built and lived in. The walls are covered with patterns made of thousands of mirrors. The museum attendant showed me how it used to look in the evening when the lamps were lit. How the lights reflected and shimmered in the dark. He lit a light and moved it around to show the effect of the reflection in the mirrors. Sadly, I did not take a video.

Naulakha Pavilion in Shish Mahal was so called because it cost 9 Lakh rupees to build. A Lakh is 100,000.

I particularly liked the Hathi Paer or Elephant Path. This is a huge stairway that was built large enough for the elephants to walk up to the Royal Quarters carrying the King.

It was a memorable visit and one which I hope to make again. 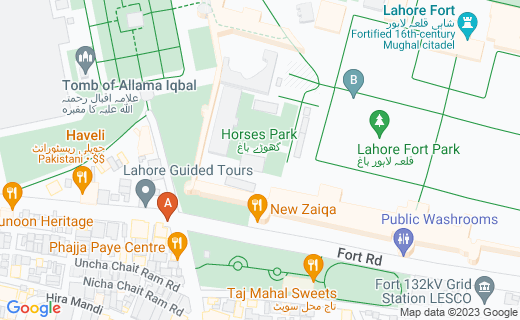 Pakistan seen through my eyes

Pakistan seen through my eyes, A photographic journey around Lahore (Travels in Pakistan Book 1)
Buy Now

The Empire of the Great Mughals: History, Art and Culture
Buy Now