Visiting Lake Havasu and staying in a hotel or motel for a few days is one thing, but to actually experience everything this desert oasis has to offer is quite another. Drawing upon personal experience, I can confidently say one of the very best ways I can possibly think of to get the most enjoyment out of your weekend trip or extended vacation, is to spend each and every day riding gently atop this massive lake, not anchored to the shore, or trapped further inland surrounded by four hotel walls, but rather floating softly aboard your own private luxury vessel equipped with everything you need to savor each moment of your long anticipated vacation or exciting spring break adventure. What could possibly be more fun or relaxing than spending an entire week gliding along in lockstep with a light current upon a cushion of water? Engaging life's offerings and natural wonders up close rather than settling for the same old redundant hotel routine. Bathing beneath the blazing sun on the boat deck, then without thought or hesitation, just indiscriminately rolling off the side toward the water, culminating with a light splashing entry as you gently fall into the awaiting lake. In an instant, the lukewarm, crystal clear waters sooth your entire body from head to sun drenched toe.

Lake Havasu is synonymous with many things and visions including the well documented and publicized antics of overly enthusiastic and uninhibited college student interaction. But over the years, the direct result of several different forms of Public Relations efforts, this desert star is building a solid reputation for being much more than just a wild desert rendezvous point to prance around in a skimpy bikini or board shorts. Lake Havasu has evolved into something much more than an a shallow, exhibitionists Utopia and now provides the perfect location, atmosphere, and ample outdoor sports and physical activities to hold bragging rights as a diverse, well rounded getaway destination. This remote oasis also continues to be a favorite spot of our senior citizen demographic, an incredibly serene, relaxing place for people from around the globe to re-locate, retire, and spend their golden years having a golden time. The mercifully favorable year round mild weather conditions inadvertently converts this dream into reality, unlike other regions of the country where severe weather dominates fall and winter months making it extremely difficult to function during mother natures down time. Daytime winter temps average in the upper 60's so needless to say, Lake Havasu is unquestionably a prime location if weather considerations dictate your travel or retirement plans. And yes of course, the ever popular non-stop party extravaganza known as "Spring Break, where college students from all corners of the country pile into Lake Havasu City to release an entire years worth of pent up academic tension and stress generated from time consuming, intense college study, will more than likely retain previously established designated slots on the April calendar page for generations to come.

In recent years, Lake Havasu has been featured on several network and syndicated television shows such as MTV numerous times capturing exhilarating, fun in the sun "Spring Break" escapades, but the city also plays host to several other diverse events including Jet Ski Competitions, Fishing Tournaments, Regatta's, and various Marathon Races. It's a place where the sky's your only limit, and I wouldn't be the least bit surprised if parasailing, or a modernized, contemporary, re-tweaked version of this tethered aerial adventure pops up in the near future. In brief, you can party excessively from day one until your stay is over, or just relax beneath a swaying king or queen palm each and every passing second. The choice is yours.

There are so many fun and interesting things to do in and around Lake Havasu, but if you're anxious to take a breather from the nautical experience, and in the mood to get back on the road to explore the outskirts of town, one of the most popular "Day Trips" and destinations launched from Havasu City is an excursion to sister municipality Kingman Arizona and surrounding vicinity. Approximately 60 miles to the northeast is where you'll find one of the most charming and typically "Western" cities in the area. Kingman, a perfectly situated, bustling hub for residential, commercial, and overall economic growth, is experiencing a rapid transition from previous designation as a small sleepy little rural town consisting of a few thousand people, to a moderate sized city with a generous population of tens of thousands with a positive outlook of many decades of improvement and growth potential ahead.

Today, as a result of significant and ongoing relocation from other regions of the U.S., roughly 40,000 residents call this blossoming place home and the city now plays host to a wide range of outdoor activities to keep the migrating baby boomers active, fit, and healthy. Everything is here including Hiking, Biking, Golfing, Off Roading, and the list goes on. Route 66 runs right through the heart of town, so if your interested in cruising on a piece of certified historic pavement, you can do so while documenting this once in a lifetime event right there in Kingman. Be sure to have a camera ready, willing, and active for the drive, some of the most incredible desert vistas can be found in and around the city and some phenomenal snapshots can be framed up right from your vehicle as you drive through town.

In addition to the unique and plentiful photography opportunities coupled with an infinite list of outdoor activities, one of the best eatery's in the west can be found in Kingman. Mr. D's Diner, Rated #1 in Arizona for 2010 and consistently ranked at the top of its class every year. High profile celebrities from all over the world have popped in to wrangle with one of their famous burgers or shakes. It's also a popular hangout for contemporary, classic, and antique car buffs and collectors. With an impromptu, surprise auto show a distinct possibility at any given time courtesy of residents who are hobbyists or professional competitors, if a little luck is on your side when you stop by, finding a few antique or vintage autos resting comfortably in the parking lot would unquestionably add visual flavor and legitimacy to the 1950s flare, and of course intensify the level of excitement to the overall dining experience. Especially if you're a car buff or avid collector.

More of Kingman's unique history includes the Atchinson, Topeka & Sante Fe Railroad which was built in 1907. The distinct marker is located at the intersection of Andy Devine Avenue ( Named after the famous actor ) & 4th St. This landmark which symbolizes Kingman's long standing relationship with, and dependence on rail shipping and commerce was placed on The National Register of Historic Places by the United States Department of the Interior.

Well, it could never be misidentified as Las Vegas, but it sure feels like her baby sister. Located approximately 67 miles to the north of Lake Havasu right on the banks of the mighty Colorado River is where you'll find this secluded, scaled down yet rapidly growing version of "Sin City".

Mainly a tourist destination and alternative for those who prefer a more laid back style and approach to gaming entertainment in the same tradition as Las Vegas but without the over indulgent, flamboyant glitz or larger suffocating international crowds, Laughlin has maintained its reputation over the years as a low key, introverted place to try your luck at the casinos or take in a show or two. While it still maintains a moderately slower pace verses big sis' Las Vegas, there's still plenty of casino action to be found here and Laughlin attracts some of the same top notch entertainers. The concert venues are just as elaborate and on par with many upscale, premier locations in Vegas. The picturesque, pastel colored Black Mountains situated to the east provide a naturally exotic backdrop for the outdoor amphitheaters and the sweet, arid, balmy desert breeze appearing right on queue, is always an extra added gratuitous comp.

After a busy day of hot entertainment and delightfully sinful shows, you might be inclined to expel those extra calories by taking a jog or brisk star lit stroll upon the "River Walk". This primary shoreline artery which connects the majority of gaming establishments is a perfect place to observe all the incredibly vibrant neon colors which emanate from the collection of lighted hotels as they pierce the desert skies and reflect generously upon the Colorado River. Schedule an appointment to be outside the hotel at sunset, look to the east in the general direction of the aforementioned Black Mountains, and have your camera powered up to maximum capacity and ready as the sun begins to cast a much anticipated shadow over the awaiting peaks, and then slowly rotating downward unto the body of these majestic delights. 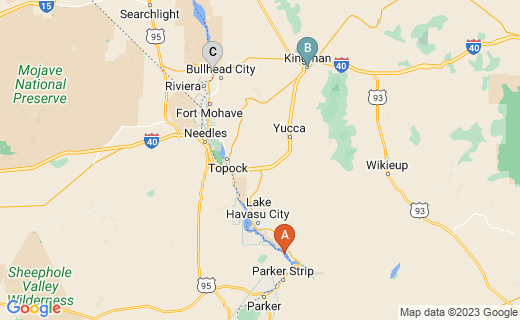