Madison, Wisconsin is one of the Top 25 Best medium-sized Cities in America for success in Jobs and Business and recognized by a number of economics and financial publications.

The County Seat of Dane County and the Capital of Wisconsin, Madison's background dates back to the Revolutionary War and the Northwest Territories. Several places in the city and county are on the National register of Historic Places.

Dane County was founded in 1836 and named in honor of Nathan Dane, who was originally from Massachusetts on the East Coast of the US. Mr. Dane was a delegate to the First Continental Congress in the founding of the New Nation post-revolution.

Dane guided Wisconsin to become the last US State to be formed from out of the Northwest Territories.

Wisconsin was the last US State to be formed from out of the Northwest Territories.

Wisconsin rail projects have stalled under Governor Scott Walker. The Amtrak Hiawatha service from Milwaukee to Chicago is perfect for the implementation of high-speed rail, but no concrete plans have been made for high-speed rail construction on this route. 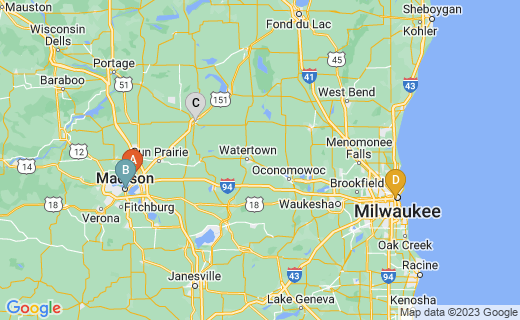 Residents want another train depot and passenger rail service from Madison outwards. Distance to Milwaukee is about 80 miles.

One pickup point for Badger Bus. No terminals or stations. Some points are drop-off only. Tickets should be purchased online.

Over $800,000,000 for light rail was given to Wisconsin by the federal government, but rejected by the Governor. In Ohio, $400,000,000 was rejected in the same way. However, light rail would boost the economy of both states.

State statistics from Workforce Investment Act-inspired development programs and information from county reports indicate that Healthcare as an industry is and will continue to be a leader in Madison, Wisconsin.

This is supported by by the medical needs of America's aging population in the Baby Boom Generation, but also in the Millennial Generation born roughly from 1980 - 2000. The Millennials meet the numbers of the Boomers and as the aging Boomers pass on, the younger generation will create an aging America again until at least 2100 AD or longer.

The top 10 Healthcare Careers in Madison are gathered in Technicians, Technologists, RNs, and important Assistants, as well as Veterinarians and Vet Techs.

The next 10 highest-demand jobs in Healthcare are the following occupations:

Madison is Great for Senior Workers

As of mid-2008, the US Census Bureau's partnership with Wisconsin produced a profile of older workers, age 55 and older. The profile includes age groups, job gains/losses by industry, identifies industries in which older workers numerous, and job stability/earnings.

Thus far through 2015, evidence shows that:

Careers for Mature Workers In Madison

Growing Up With Chris Farley is a presentation that commemorates Saturday Night Live and film comedian Chris Farley's life, based on books by his brothers.

Mr. Farley was raised in Madison, Wisconsin. He studied theater and communications at Marquette University, graduating in 1986. After Saturday Night Live, and several films, Farley was cast originally in the title role of Shrek, but died and the part was given to Michael Myers.

Chris Farley's Voice and Story Board As Shrek

The indigenous nations of the Menominee, Ojibwe/Chippewa, Potawatomi, and Ho-Chunk or Winnebago groups are some of the first inhabitants in the lands that became Wisconsin. Because of this, Madison is the location of some entertaining and educational annual pow wows.

The Ojibwe/Chippewa People settled in Wisconsin, Michigan, and other North Central US States, as well as Canada just to the north. Some of these families moved back and forth across the Canadian border when food became scarce and when "Indian Wars" and confrontations with the US Union Army became heated in the past. Some historical accounts reveal that the Royal Canadian Mounted Police kept the Indigenous People under scrutiny as well. It was a tough life for them and this tribal nation is one of survivors, to be sure.

Dance contests are fascinating to watch in these events and include traditional and modern men's, women's, children's and couple's dances. many demonstrations are performed of tribal traditions and the food kiosks are always well populated. Music is played around the grounds throughout the pow wows.

Tribal Occupation of Wisconsin and Madison