Find the Landmarks If You Can!

Sure, the City of Cleveland, Ohio may be easy to identify by the prominence of the Terminal Tower near the center of this dated aerial image, or by the view of the Lake Erie breakwater in the distance. Perhaps you once spent a lazy afternoon watching the Cleveland Indians play (or the Cleveland Browns struggle) at old Municipal Stadium at deep right. Well, feel free to test your memory — or your three-dimensional sense of this Midwestern city — by trying to spot these locations:

• Though as of today it has abandoned much of this lakefront, Cleveland’s port once bustled with Great Lakes and St. Lawrence Seaway shipping traffic. Shipping still frequents the Cuyahoga River, while the lake shore has sprouted museums, parks and other attractions.

• While the city’s Rapid Transit System still operates, radiating outward to suburban stations, the myriad other rail lines that once entered beneath Cleveland’s Union Terminal in the base of The Terminal Tower have since given way to parking lots below Tower City Center and its Avenue of shopping, dining and cinemas.

• The famous/infamous celebratory LeBron James banner was removed from this massive brick wall facing incoming Ontario Avenue (the deep shadowed façade just below the Terminal Tower in the above image) once he joined that western basketball team.

• Near the northeast corner of Public Square sits the historic red sandstone Society for Savings Building. It would later house a Key Bank branch and offices, and would be flanked by the Cesar Pelli-designed Key Tower, now the tallest building in Ohio.

• The new First Energy Stadium, home of the Cleveland Browns NFL team, has been erected atop the very site that once held the cavernous Cleveland Municipal Stadium (appearing like some giant flying saucer that has landed at upper right).

More of the Core

• The Avenue of Tower City Center, a gleaming retail arcade plus food court and cinemas, sprouted from the southwestern face of the Terminal Tower’s base and extended much of the way to Huron Road and the Cuyahoga River’s hairpin bend. With the dissolution of Forest City Development, the Avenue's former owner, we must await Dan Gilbert's plans for revitalizing the Terminal Tower and The Avenue.

• The low buildings and parking lots of the former Central Market area (lower right of the Terminal Tower complex) have since given way to the Gateway District, and its two signature structures: Progressive Field (formerly Jacobs Field, Home of the Cleveland Indians) and Rocket Mortgage Fieldhouse (formerly Quicken Loans Arena and Gund Arena).

• The utilitarian multi-story office and warehouse buildings of the city’s Warehouse District (just uphill from the Cuyahoga River’s ‘Flats’ and just north and west of Public Square toward Lake Erie and the mighty Cuyahoga), are now renovated and gentrified as offices, condos, lofts, clubs and restaurants. 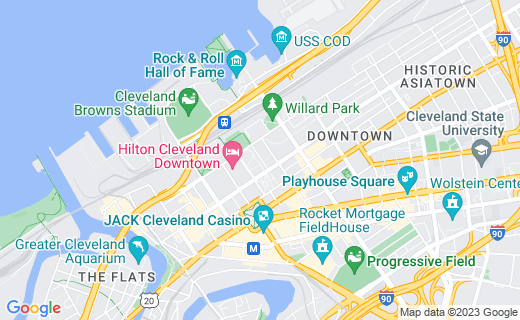 From Public Square Toward Lake Erie

• Other than the clearly prominent Terminal Tower, one of the tallest structures flanking the city's four-block Public Square (itself hidden deep at the center of the photo) was demolished in the 1980s to make way for the massive former BP America headquarters tower, now known simply as 200 Public Square.

• The historic Beaux-Arts Cuyahoga County Courthouse, at the terminus of Ontario Avenue at Lakeside Avenue (upper center of the photo), later gained the massive new neighbor of The City of Cleveland-Cuyahoga County Justice Center, which consists of the chunky Brutalist stone forms of courts tower, police headquarters and a two-phase city/county jail.

• The parallel rows of trees of the public malls A, B and C once marched across the roof of Cleveland’s underground Convention Center. With the Convention Center's complete remodeling in recent decades, those rooftop plazas and gardens have also been revamped.

• The historic U. S. Coast Guard Station that long occupied a prime observation point on a breakwall jetty at the channeled mouth of the Cuyahoga River has since given way to a much larger Coast Guard facility along the east flank of East Ninth Street where it meets Lake Erie.