An End to the Building Drought

Known locally for years as The Illuminating Building — for its long-time prime tenant The Illuminating Company (formerly CEI, or the Cleveland Electric Illuminating Company) — 55 Public Square was designed by the architectural firm of Carson & Lundin. With strict Modernist lines and an exterior skin of glass and aluminum curtain-wall, it bears a striking resemblance to Gordon Bunshaft’s Lever House in New York City. The Cleveland skyscraper, however, is nearly twice the overall size of the Manhattan structure, encompassing 430,000 square feet. Due to the building's proximity to the city's courthouses, much of the building tenancy consists of law firms.

Built at a time of steel shortages, 55 Public Square incorporated just 10 stories of steel framing. Those floors are sandwiched between the massive ‘floating’ concrete slab foundation several stories below ground, and an upper 12 stories of reinforced concrete frame construction (the first use of such construction type in the city). The building’s south façade is capped by nearly-story-high brushed metal numerals displaying the Public Square address.

The site upon which 55 Pubic Square was constructed had originally served as home to several of the city’s courthouses through the 1800s. Also occupying a corner of that site by 1879 was the world’s first electric streetlight, a Brush arc lamp created by Cleveland inventor Charles F. Brush (a high school in South Euclid bears both his name and the mascot 'Arcs'). A replica of that streetlight has hung ever since, outside the former John Q’s Steakhouse restaurant hugging the southwesterly corner of the base of the high-rise tower.

The sleek rectilinear office tower rises from a tall glazed lobby, fronting on a modest and simple pedestrian plaza separating the tower from Frankfort Avenue. Serving the tower on its northern flank is a seven-level parking garage. 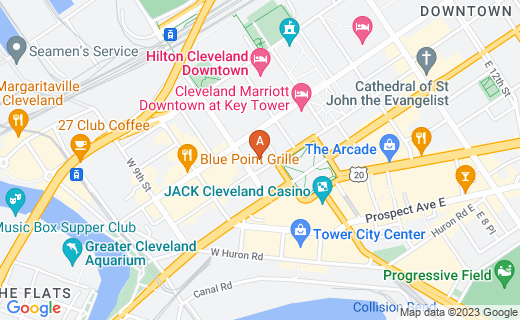 Impressive views from this tower of all of Public Square and its surrounding landmark buildings.

Neighboring 55 Public Square to the east just across West Roadway is 75 Public Square, the previous home of The Cleveland Electric Illuminating Company (CEI, now known as simply The Illuminating Company). That 1915 structure is a 15-story Italianate design by Hubbell & Benes Architects on the strict columnar order, organized into clearly identified base, shaft and capital with wide overhangs. It was but one of many Hubbell & Benes designs of the early 1900s constructed throughout Cleveland.