On the Trail Again

Just yesterday (October 5, 2014) I led my fifth "Hike and Write" for the local chapter of the Sierra Club up to Vedauwoo, Wyoming between Cheyenne and Laramie. Nine of us (including my son and granddaughter) shouldered our packs in a brisk and chilly Wyoming wind to take the Turtle Rock Loop Trail for about three miles.

I explained to them that "Vedauwoo" is an Arapaho word meaning Earth-born Spirits. The Arapaho believe today and yesteryear that all things in the natural world inter-communicate. A lichen-covered rock can communicate with the sky. A fluttering aspen tree perceives what a raven is thinking. A moose can talk plainly with a human who can in turn talk with rocks high in the sky. Even wild strwberries need to be listened to before being eaten.

This huge rock formation (easily seen from Interstate 80) is made up of Sherman granite some 1.8 billion years old that was gradually uplifted during the Laramide Orogeny over 60 million years ago. All of this rock gradually eroded over the millions of years through the agents of wind, rain, snow and ice to become what they are today. A younger pink granite etruded from gray Sherman granite 1.4 billion years ago creating an interesting mixture of rocks today rising some hundred feet above the high plains and heavily encrusted with orange, green, yellow and black lichens (themselves a good example of inter-connection as algae and bacteria living in symbiosis)..

We began our hoof through an aspen grove down into marshy land to our side where we expected to see moose, but nary a one showed his face. Chipmunks, however, scurried up and down nearby ledges. As our Turtle Rock trail curved slightly northward, we passed by an Egyptian Pharaoh-head shaped rock, pink in color, with bushes growing out of fissures in the cliffs below his head. We ambled past a few stately Colorado blue spruce trees along with crustier-looking Douglas firs whose needles are flat and soft compared to sharp and pointed spruce needles.

Our trail took a sharp curve northward past bright red rose hips (that make an excellent tea) and out onto a slightly down-sloping ledge where we all sat down to write our amulets. An amulet's first and last lines are the same and the last few words of the first line become the first words of the second line whose last few words become the first words of the third line and so on. An amulet can be a short four lines or a much longer poem. It is the ideal poetic form to show inter connections in the natural world, and what better place is there for amulets than Vedauwoo. Here is the one I wrote:

fire that warms not the flesh,

not the flesh but the spirit,

the spirit of one in quest,

in quest of wild Nature,

wild Nature that rises within,

within the person revived by

We all shared our amulets by reading them aloud and applauding these poetic efforts.After some swigs of cold water, we proceeded around the back side of Vedauwoo to come across a trickling stream flowing through aspen and willow groves. Within a half hour or so we came around to the front side of this collection of rocks, and my son Rich shared his experiences of climbing up the fissures of high cliffs when he was in a high school rock climbing club. In one instance he and others did a 60-foot free repel from the top of an overhanging ledge called "The Potato Chip."

On one last stretch of trail through aspen and pine and lichen-coated rocks, we returned to our cars and the ever-blowing Wyoming wind that continues to shape the contours of ancient Vedauwoo. 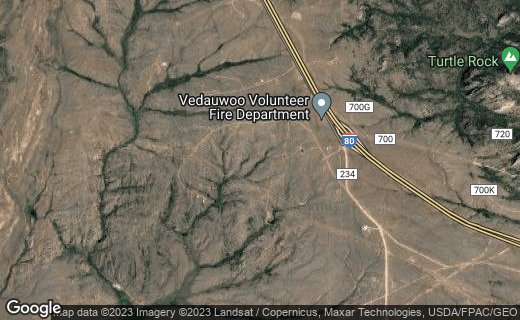 Did you know that "Vedauvoo" means earth-born spirits" in Arapaho?