State and national parks and historical attractions have long been a favorite destination for Liz, and she loves sharing them.

Local Indians, the Takelma, lived in the area for thousands of years, where the park now is. There has been no evidence found of native use of the cave, although they undoubtedly knew of its existence.

It wasn't until 1874 that it was discovered by Elijah Davidson, the first white man to be in the area, .

In 1903, President Roosevelt put millions of acres of land aside, among them, the Oregon Caves area in the Siskiyou Mountain Range of Southern Oregon. Then, in 1909, President Taft proclaimed the 480 acres containing the cave system as a National Monument.

It was a road trip up the Redwood Highway with my two daughters, then ages 8 and 10, that inspired a side-trip to the Oregon Caves National Monument. I wanted to show them the wonders of the great trees as I had seen them in my own childhood. Many fond memories of camping trips with my family fueled my enthusiasm for this budget-friendly and eco-friendly means of travel. My father loved the trees, mountains and streams; he was an ecologist before the term was invented. But, this is about the cave. I've always been fascinated by caves and caving.

The AAA Guidebook described this destination as an interesting feature worth exploring. Since this was back in 1979, I cannot recall exactly where we spent the night, as there is no camping allowed within the boundaries of the national monument itself. I do know that we would not have stayed at "The Chateau at Oregon Caves" in nearby Cave Junction, OR. That would have been over-budget.

It was probably about 11:a.m. when we pulled in to the parking lot. Being mid-summer, it was quite warm outside. The parking lot was at the bottom of a fairly steep hill below the cave and gift shop...probably about a city block long. We walked up the hill, and purchased our tickets for the cave tour, and then walked around outside, browsed the gift shop, and so forth, waiting for our group's number to be called.

As I said, it was quite warm outside, and my youngest was dressed in a t-shirt and shorts. Walking up the hill had almost made me wish for shorts instead of jeans and a sweatshirt. My eldest had a sweater and long pants, or maybe shorts--I don't really recall.

I had asked the little one on leaving the car, "Do you want to bring your sweatshirt?" "Nah, I'll be fine." was her answer. Always one to travel light, and to 'run hot,' I acceded to her wishes. There was no need for flashlights, as the Ranger tour guides carry them, and the cave is wired for lighting as well, So, I had with me only my "fanny pack" with essentials.

Our number was called: "Group # so-and-so, your tour begins in 10 minutes." At this point, we moved to the gathering point at the entrance. As you descend below the surface of the earth, the temperature drops, and keeps dropping the deeper you go.

On an average, temperatures inside caves range from about 44 degrees to about 55 degrees Fahrenheit. As we stood at the entrance, we could feel a chill breeze exiting the cave.

This difference in temperatures is exactly the same phenomenon that causes wind on a global scale. Since hot air rises, and cold air falls, the rising hot air will be replaced by the lower-lying cool air mass rushing in to replace the rising hot air. This is wind, and was the breeze we felt.

With barely 5 minutes left to our tour group's departure, the young one decided that yes, indeed, she was feeling chilly. Great! Too late to hike back to the car to fetch her sweatshirt. Nothing to do but rush into the gift shop and purchase a new sweatshirt for her. It was a very nice, heavy sweatshirt with hood, printed with the Oregon Caves logo.

It cost $24.00. That was a fairly inflated price for a sweatshirt back in 1979, but what could I do? I paid with travelers cheques, as I did not have enough cash. She put it on, and we hurried back out just in time to re-join our group just as the ranger was unlocking the entrance gate to the cave. Whew!

I was doing a bit of grumbling at my daughter, chiding her for refusing to take her sweatshirt from the car, etc, etc. I was overheard by another lady in the tour group, who had obviously been on the tour before. She spoke up and said, "You know, at the ranger's office, they rent jackets for 25 cents."

WHAT???!!! Well, why did no one say anything before?? Why did that lady not say something before? Naturally, the gift shop was happy to make a sale, and was not going to volunteer such information! But, why did the rangers not post a sign? I was very annoyed.

Well, the tour started, we followed the ranger through the approximately hour-and-a-half long hike, declining to escape at the proffered "chicken exit" about 15 minutes in...and we fully enjoyed the experience.

I've got an affinity for caves and caving, and wonder if some spelunker was not in my ancestry somewhere.

We successfully completed the tour, finished our camping trip heading back down the Redwood Highway (a.k.a. U.S. Hwy 101) toward home.

One of the Many Features Inside the Caves

You'll Never Live It Down...

As for my dear, dear daughter, who now has children of her own, she'll never live this down, (as with her grandmother's 'forever' story of the pink paint). The Oregon Caves trip has come to be known as "The 25-cent rent-a-coat incident." 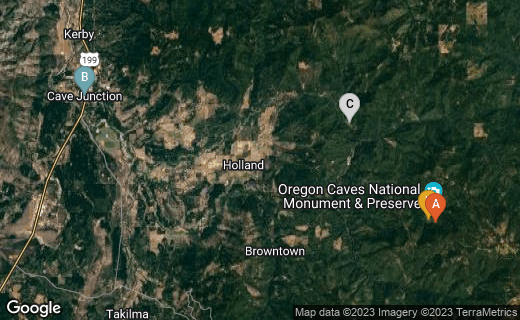 The nearby town of Cave Junction

The Chateau at the Oregon Caves is a rustic lodge near the caves.