A Cafe with a Difference

It was in March 1995 that a friend and I visited Beirut. After a morning’s sightseeing along the Corniche coastline, we found ourselves, hot and thirsty, at the St Georges, one of the trio of once-glamorous hotels that included the Holiday Inn and the Phoenicia. In a city still riddled with bullet holes, this felt reassuringly smart. Entering the garden we were greeted by a casually-dressed man. Could we get a drink, we asked. Of course, what did we want? We requested two beers, and he pulled up a table and a couple of chairs, setting them on the multi-coloured tiles near the swimming pool. Once the scene of much decadent partying, it was now empty and dilapidated. Looking around, we realised that, not only were we the only customers, but that there were no other chairs or tables, no flowers or decorations, and that the garden itself was looking distinctly neglected. In the near distance we could see the Holiday Inn, once the centre of fierce fighting, and all around us the sound of jackhammers signalled the rebuilding of this broken city. Waiting for our drinks, it took a minute to grasp that the St Georges, into which we’d so carelessly stumbled, was, itself, little more than a shell, with workmen clearing away the debris. Moments later our self-appointed host arrived with the drinks, cheerfully setting them on the table. Only then did it occur to us that he’d probably nipped out to a nearby store to get them.

The St Georges has subsequently suffered numerous setbacks, not least of which was the 2005 bomb blast that killed former Prime Minister Rafik Hariri and tore through its front façade, but there is a spirit to Beirut, an energy and enthusiasm, that even the deadliest of wars cannot break. 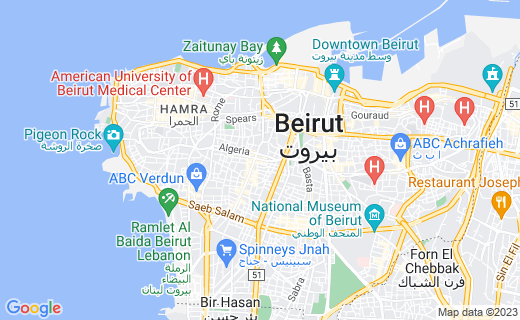