Art Galleries in Brisbane- In the last ten years numerous social commentators agree that the city of Brisbane Australia has come of age. A city very active in the field of Art.

The Art Gallery of Queensland and The Gallery of Modern Art known as GOMA in what is known as the cultural precinct. Bus Ferry and train services provide easy access by public transport.

Since the opening GOMA in 2007. GOMA has hosted many International exhibitions. These included Picasso and Andy Warhol Collection.

GOMA held an exhibition of 'Haut Courteur 'which covers the life of internationally fashion designer Valentino- Valentino A Retrospective.

The exhibition covers 100 of his original famous gowns worn by film celebrities of the last 50 years.Being a 'man' I thought I would struggle with the idea of visiting such an exhibition but must confess I have been back and an fascinated with the materials he used which were all unknown to me.

His most famous shot is that of Marilyn Munroe who he got up close and personal with photographing her with nothing other than a white silk sheet. Other notable stars photographed include Audrey Hepburn,Coco Chanel, Judy Garland, Julie Andrews, Stevie Wonder, Micheal Jackson, Jack Nicholson and John Travolta.

The Queensland Art Gallery was the only venue in the world to show the exhibition 'American Impressionism and Realism: A Landmark Exhibition from the Met'[Metropolitan Museum of Art]The exhibition makes available to Australian audiences, for the first time and on an unprecedented scale, a selection of 71 paintings from New York’s Metropolitan Museum of Art. Included are many of the Metropolitan’s best examples in the American Impressionist and Realist traditions which have never before been displayed together and are not likely to be lent again as an ensemble.

Currently there is an exhibitions of one of Australia’s greatest artists, Hans Heysen (1877–1968), is celebrated with this major retrospective featuring over 70 works created over the artist’s 70-year career. 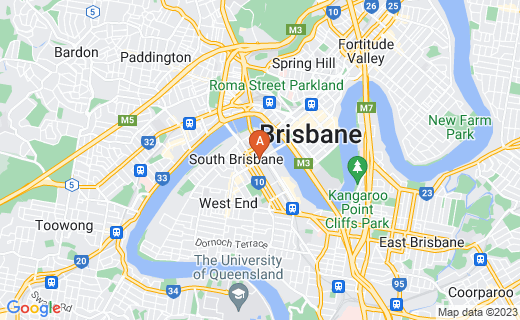 Private Commercial Art Galleries- There are lots of great private galleries around inner Brisbane that contain works of art for sale.

The Philip Bacon Gallery is probably the most famous containing high end art works from Australia and around the world. Philip Bacon has an excellent reputation as a Art Dealer and Philanthropist. Philip generously sponsors lots of artistic events in and around Brisbane. The Phillip Bacon Gallery is Located in Brunswick Street, Fortitude Valley /New Farm. Close by along the same street are a number of other private galleries such as Edwina Collette and many other displaying a variety of Art Works.

THere are now private gallery precincts in the Brisbane suburbs such as in Brunswick Street, Fortitude Valley, and in the trendy suburb of Paddington. Other Art spaces are forming in Brisbane suburbs West End and Bulimba. as well as in New Farm. World class Art is displayed in these Galleries. Including native Aboriginal Art.