Tips for an Amazing Road Trip Through Rajasthan India

In July 2010, my boyfriend and I arrived in New Delhi and after three days of exploring the capital, we decided to spend our next two weeks in India by traveling through Rajasthan by road. We set out on a road trip through the northwestern part of the country. We went to the nearest travel agency and hired a car and driver to take us to this exquisite region on the next day. Our itinerary included: Agra (the location of the Taj Mahal), Bikaner, Jaipur (known as the “pink city”), Jaisalmer (known as the "golden city"), Jodhpur (known as the “blue city”), Pushkar, Udaipur, and a stop we didn’t plan, a day at the Jodhpur hospital! Looking back, it wasn’t the destinations that made out trip unforgettable but the process of actually getting there.

The assortment of transportation that we saw while on the roads is incredible. Besides cars (which were mostly the Indian Tata mark that even we were driving), there were camels and donkeys pushing wagons, trucks and busses completely loaded with people with some people holding on unbeknownst to me how from the outside! There were bicycles, motorcycles, and there were guys pulling passengers on their cycle rickshaws.

Experience of Driving in Rajasthan

Rajasthan, sometimes identified as the "Desert State of India" is like an exotic beauty in a vast desert. The region is colorful, diverse, and beautiful, and a road trip is a remarkable way to take it all in. The most difficult part of a road trip through this region is the long distance between cities, which took us an average of six hours each! Although this allowed us to make stops whenever we wanted and really get an appreciation of the wonders of this region. We drove past sand dunes on the Thar Desert, green valleys that seemed to appear from out of nowhere, different bustling communities between cities, and saw historic forts high up in the mountains. The region clearly has a very rich culture and heritage. And might I add, the roads are in pretty good condition, with none of the potholes I've gotten used to in New York City. The only thing that may hold you up while on the road is maybe a cow that's standing in the middle of the road or the amazing sight of a caravan of camels walking one after the other. Both are pretty amazing to see and will stay with me forever!

Tips For When Your're Driving in Rajasthan

District Map of Rajasthan Where We Did Our Roadtrip 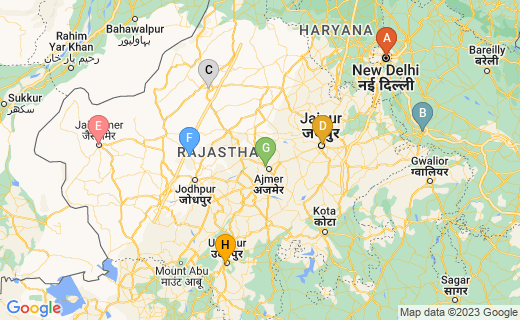