Forming a part of the high-rise ‘wall’ that runs north-south along the eastern edge of Cleveland’s downtown is the twin-slab Reserve Square complex. Towering above a stretch of East 12th Street is the original 25-story hotel tower, once occupied by Embassy Suites and currently operated by Radisson, completed in 1969. Paralleling that tower some distance further east is its 25-story twin apartment tower, completed in 1973.

Designed by the locally prominent architectural firm of Dalton, Dalton, Little and Newport, Reserve Square is a dense, near-zero-lot-line facility, rising abruptly from all of its surrounding sidewalks. The common base of the twin towers houses a multi-level parking garage and a host of support facilities and spaces — tennis courts, pool, sun deck, laundry, fitness center, and retail options — including the offices of several local television stations.

At its completion, Reserve Square was touted as a ‘city within a city’, a place that enabled residents to find all the necessities of urban living available to them with the property’s boundaries. That concept has been undercut by the recent stagnation of the surrounding area, and problems associated with a city park opposite East 12th Street. The current refashioning of that park by the City of Cleveland holds promise for the resurgence of Reserve Square.

The architectural style of Reserve Square is modern Brutalism, with much of its base consisting of exposed and variously tooled cast concrete. By 2005, local Willoughby development company K&D Group had acquired both halves of the Reserve Square complex, and began planning a substantial retooling of the property. Reserve Square joins K&D’s growing portfolio of hotel and apartment properties. 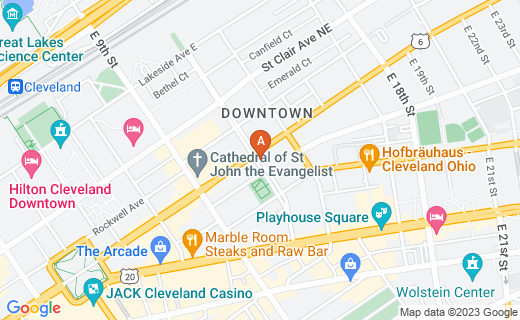