Savannah Georgia was founded in 1733 by General James Oglethorpe

The first planned city in America

Planned in the 1700's, Savannah ga features over 20 monumental squares carefully laid out in a unique grid-like formation, which allow for wider streets and spacier parks.

The squares are filled with everything from restaurants to Civil War forts, and have greatly impacted the historical value of the city- Which, as a whole, contains one of the biggest historical landmark districts in the United States.

To add to its list of attractions, the city is also host to numerous legends and ghost stories that speak of Indian burial grounds and haunted plantations. It has its very own island, world-famous art & design school, and has had many famous movie scenes shot there.

It is no wonder why people come from around the world to visit this southern city.

It all started with a Ship, a General and an Indian Chief named Tomochichi

The Goodship "Anne" and her 120 passengers, including General James Oglethorpe,

traveled down the Savannah River and came to rest on a bluff that would later become the great city of Savannah.

Sometime upon his arrival, James Oglethorpe was greeted by Tomochichi, an Indian Chief that had already been living there before the ships arrival.

The two became friends, and after a mutual peace agreement, the Chief allowed Oglethorpe to colonize and settle into the land.

This gave the city itself an advantage because during that time many of the other colonies were under war-induced hardships.

The colony of Georgia and the city of Savannah never really saw these hardships until a later time thanks to the bond formed between the two men. Therefore, the city thrived.

Trade was increased, citizens could choose their own worship rituals and all things "Sin" such as slavery, hard liquor and lawyers were not allowed at first. This was meant to better the lives of the working class people from England.

After the invention of the cotton gin in 1793, the city quickly became known for the Savannah Cotton Exchange. This was the place where a big majority of the world's cotton prices were made.

The city also served as a barrier to keep out the advancing Spanish from Florida. However, it was not the Spanish who would ultimately take the city.

Once the American Revolution began, the British got ahold of the city and kept it for 4 years from 1778-1782.

The French and Americans had to reclaim the city and state their independence. Savannah grew rapidly after that point.

The farmers realized rich soil and perfect climate, plus slaves and cotton, equalled a huge profit. Where once illegal, plantations arose and slavery trade with South Carolina became a routine part of life.

The cotton wealth allowed residents the luxury of a lavish lifestyle. Huge plantations, mansions and churches were erected in the city.

Georgia was no longer a free colony as it had been before. In fact, there was now trans-Atlantic trade taking place, and Savannah was the main port of entry.

This brought many African-Americans through the city. It was they who ultimately inspired and left behind the fascinating Gullah vibe and culture still seen there today.

A City Not Spared from Tragedy

Despite the great fortune and beauty it seemed to hold, the city of Savannah did not maintain its good luck forever, and it suffered through many great tragedies over the years.

There were fires that destroyed the city on two different occasions in 1796 and 1820, epidemic outbreaks of yellow fever that took out one-tenth of the cities population, and hurricanes that ravished the town.

The City Makes a Comeback

After all the wars and Great Depression had ended, the economy began to thrive, and the city began to rebuild.

Women from the city got together to form a preservation group to save the historical buildings and other structures that were going to be destroyed.

These women's actions saved many of the old structures and buildings from the Civil War era, which make up major parts of the historic district. The cities historical district was nationally recognized in 1966.

The DOT program also offers an interactive route map on their site which lists every street and DOT system route in the downtown and surrounding areas.

Travel options to and from Savannah Georgia are abundant, as are the travel options upon arrival to the city. The city can be accessed by car, plane, bus or train.

If travelling long distances, Amtrak has a station located on Seaboard Coastline Drive within the city. Travelers can take a train to anywhere in the country from here.

Travelling locally in the city is also a breeze, especially downtown and around the historical areas. The city has a free transit system setup in the downtown area so that people can get anywhere they might need to go quickly, without having to pay.

The DOT system consists of:

Savannah has mostly mild temperatures year-round, with Jan being the coldest month with a low of 38°F, and July being the hottest with a high of 92 °F.

With mostly mild temperatures year-round, Savannah is a prime location for vacation and travel any time of the year.

However, when also taking festivals and celebrations into consideration, March and April are perhaps the best times to visit.

Savannah has its coldest period during January, when temperatures can be as low as 38.0°F. The warmest time is during July, with temperatures reaching as high as 92.0°F.

March, April and May are the best months to avoid either extreme of the hot/cold spectrum. These are also the months in which many of the more popular yearly festivals and tourism occur.

March in particular is notable for the huge Saint Patrick's Day, Music and Annual Tour of Homes & Gardens Festivals.

July and August are the months with the most precipitation so avoid travel during these months if the rain is an issue.

Savannah is packed with places to see and things to do. These places draw millions of visitors each year. It is definitely recommended that trips are planned to last at least a week in duration.

This would allow some time to visit all of the great places located within the city. Don't miss these popular tourist destinations:

Jepson Center for the Arts - Made with white Portuguese stone, the building for the arts is separated into two halves, connected by a glass bridge. Inside features, space for travelling exhibitions, art and hands on galleries for the young. Outside features 2 sculpture terraces and a 200-seat auditorium among other things

The Mercer Williams House- Featured in the book, "Midnight in the Garden of Good and Evil." Part of many ghost tours

To ensure there is always something to do in the city, Savannah is host to many local celebrations each year.

The biggest and most well-known, is the St. Patrick's Day celebration. Noted as being the second-largest celebration of its type in the country, this Irish-themed party draws crowds by the thousands from neighboring cities and states each year.

The party goers often wear green beads, leprechaun hats and shamrocks on their clothes while drinking green-colored beer from pint-sized glasses in spirit of the celebration. - The Music, laughter and dancing fill the streets in March.

There is also a Saint Patrick's Day parade on March 17th. Plan early for this celebration though, it fills up fast!

Some other not-to-miss celebrations in Savannah are the annual Music Festival and Tour of Homes & Gardens.

The music festival lasts for 15 days and is host to many international musicians from grassroots origins.

During the Tour of Homes, the tourists are allowed to self-guide themselves on tours through privately owned homes and gardens within the historical district.

If ghosts are whats on the itinerary, Savannah has plenty of those too. Savannah is known as America’s most haunted city, and for good reason.

The city has triple homicides, pirates and Civil War zones linked to it.

Daily and nightly tours of the historic district are offered by different companies within the city. Tourists can go by trolley or foot while touring the haunted cemeteries, buildings and underground tunnels.

There are many places in Savannah that are claimed to be haunted. Here are a few of the most well-known in the city:

The Moon River Brewing Company- Once a hotel for the city, this nearly two-hundred year old building is easily the most popular ghost-tour hot spot in the city. Even T.V. shows have been out to film in hopes of catching the eerie "Mrs. Johnson" or "Toby" who supposedly occupy some portion of the building.

Colonial Park Cemetery- The place where the famous Jesse Greathouse video was filmed. This cemetery holds many of the bodies who fell victim to the yellow fever epidemic of the 1800's. In the famous video, a ghost-like boy can be seen running across the cemetery in Civil War-like clothing.

The Pirate's House- In 1794, this house was a boarding house/ bar for sailors. According to tales, there is a tunnel underneath the basement that leads out to the Savannah River. Apparently after sailors got drunk, they were shuffled through the tunnel and forced to work the sea without their consent.

The Hampton Lillibridge House- This home was the only one to ever get an exorcism in the city of Savannah. According to legend, screams can be heard within the home, and unseen forces can be felt. One tale speaks of a city policeman who gave chase to an entity down the street with his gun out.

Wright Square - Once the location of the cities gallows, this square has seen its share of death and horror. Ghostly sightings are reported from locals and tourists alike.

17Hundred90 Inn - In room 204 of this hotel and bar, Anne, a love-struck ghost from the past, has been reportedly seen waiving down her lost sailor love-boy. There is also a voodoo cook in the mix.

Where to go in Savannah, and how to get there 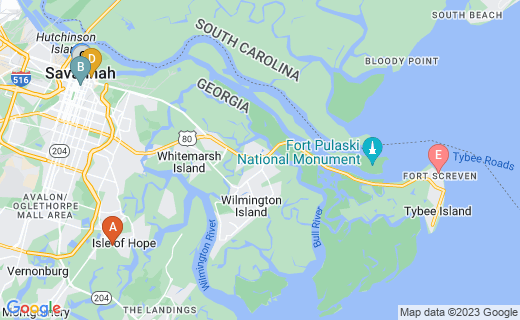 The creative commons license for all relevant photos seen here can be found here CC BY 2.0 ,here CC BY SA 2.0, and here CC BY 3.0