The Pike Place Market - The Soul of Seattle

One of my favorite places to go in Seattle is the Pike Place Market. It is the top Seattle attraction for visitors to the city and is also enjoyed by the local residents of Seattle and the surrounding area. The Pike Place Market was established in 1907 and is one of the oldest farmer's markets in the US.

The market's motto is "Meet the Producer". In addition to fresh fruits and vegetables, visitors can find fresh flowers, honey, local fish and seafood, bakeries, butcher shops, dried fruits, candy, wine, beer, restaurants, hotels, artists, crafters, street musicians and much more. It is also the home of the original Starbuck's coffee shop. An afternoon strolling through the market can be an entertaining and inexpensive way to sample the foods and culture of Seattle.

All Photos by Vicki Green - PNW Travels unless otherwise credited

The Unofficial Mascot of the Pike Place Market

Upon entering the main entrance of the Pike Place Market at the end of Pike Street I was greeted by Rachel the pig. Rachel is the unofficial mascot of the market. She is a 550 pound bronze piggy bank who has been at the market since August 17, 1986. She was sculpted by Washington State artist Georgia Gerber, and was modeled after a real pig named Rachel. Next to Rachel the piggy bank, you will see hoof prints made from casts of the hooves of the real Rachel the pig. Every year visitors drop approximately $5,000- $10,000 into Rachel which is donated to the Pike Place Market Foundation to help fund social services at the market.

Is the Pike Place Market the Most Popular Attraction in Seattle?

Have you ever been to the Pike Place Market?

Listed on the US National Register of Historic Places

Over 10 million visitors each year

and why did they name a market after him?

Well, no one really intentionally named the market after Pike. It was only an accident of location that the Seattle's "Public Market Center" became known as the Pike Place Market. The name orginated from the fact that the main entrance to the market is located at the end of Pike Street and the street that provides the main access to the market was named Pike Place. Pike Street was named after John Pike, an early Seattle pioneer and builder, but he was NOT involved in the creation of the market that now bears his last name. By the way, the surest way to reveal oneself as a tourist is to call it the "Pikes" Place Market.

To the locals it is simply the Pike Place Market or "the market".

A Tour of the Pike Place Market - A Virtual Visit

Where is the Pike Place Market? 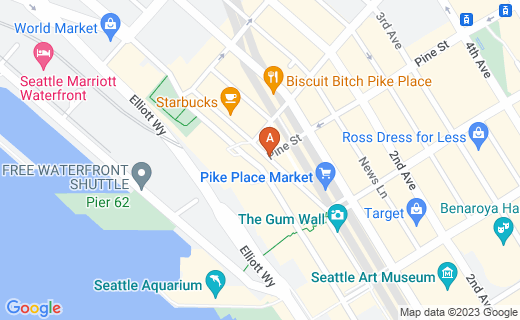 The Pike Place Market encompasses a several block area just west of 1st Ave. The main entrance is at the intersection of First Ave. and Pike Street.

Soul of the City, by Alice Shorett and Murray Morgan

Soul of the City: The Pike Place Public Market
Author Alice Shorett began studying the history of Seattle's Pike Place Market several decades ago and co-author Murray Morgan (1916-2000) was a best-selling author of many histories about the Pacific Northwest including "Skid Road". This history of the market includes many photos and stories about the individuals who fought to preserve it.
Buy Now

The History of the Pike Place Market

For those who are interested in learning more about the history of the Pike Place Market, I recommend reading "Soul of the City" written in 2007 to commemorate the 100th Anniversary of the market. 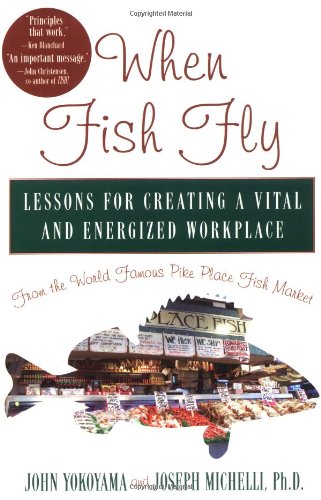 When Fish Fly: Lessons for Creating a Vital and Energized Workplace from the World Famous Pike Place Fish Market
John Yokoyama tells the story of how he changed his business and his life by making a decision to change his way of dealing with his employees by taking a personal interest in them and by creating his vision of becoming a "world famous" fish market and sharing it with them.
Buy Now

John Yokoyama, the owner of Seattle's Pike Place Fish Company, writes in his book about how he turned his struggling Seattle fish market into a success through changing his attitude toward his employees, his customers and himself.

Vegetables and Fruits at the Market

Vendors at the market display their fruits and vegetables beautifully. The produce is local whenever possible, but obviously no farmer can have a ripe watermelon available that was grown in the Seattle area in the middle of winter. No matter when you visit the market, everything is always of the highest quality, beautifully displayed and delicious!

Restaurants in the Pike Place Market - Casual take-out or Fine Dining? Check out just a few of the choices.

Have a cup of coffee where Starbuck's began.

Actually the flagship Starbucks at the Pike Place Market is not the location of the original Starbuck's. The original shop was opened on March 31, 1971 at 2000 Western Avenue. It moved to this current location at 1912 Pike Place in 1976 before the company was known outside of Seattle WA.

Starbucks Coffee cups and mugs have become popular collector's items. I was astonished to discover that some rare ones sell for over a hundred dollars on eBay.

Fresh Flowers at the Market

I love flowers, so one of my favorite things at the market is all of the flower vendors. A beautiful, fresh bouquet of flowers at a bargain price!

Get a Portrait of Yourself

Buy a portrait of yourself or a famous person

There are always many artists at the market. You can watch some of them as they create their masterpieces. You can even have your portrait done!

More Artists and Art - Casual and inexpensive or world famous!

Ed Newbold, a world renowned artist,who specializes in wildlife art, especially species of the Pacific Northwest. His shop has been at the Pike Place Market since 1982 where he sells prints, posters and cards featuring his paintings

Take home a drawing of a local scene

Patrick Kerr is an artist who specializes in beautiful pen and ink sketches of local scenes. His shop is located in the Pike Place Market in space #323.

More Interesting Things to See and Do - Always unique and colorful

Take a Tour of the Pike Place Market

Walking Tours of the Market

Learn More with a Guided Tour

Seattle's Pike Place Market is a great place to wander around on your own for free, but if you would like to get more out of your visit to the market, you can take a guided walking tour.

1. Pike Place Market Food and Cultural Walking Tour - Eat your way through Seattle's most celebrated culinary landmark -- the Pike Place Market. Go behind the scenes on a walking tour to experience some of the city's favorite market spots. Taste locally made foods and beverages that will awaken your palate, meet and interact with the exceptional people that give the market life and hear their humble, often humorous stories, or

2. Historic Walking Tour of Pike Place Market Learn about the rich history of Seattle's famous Pike Place Market on this 1-hour walking tour. Your professional local guide will tell you intriguing tales and interesting facts as you're led through the many sections and rows of this bustling market, as well as the lower levels where hidden treasures await.

Inn at the Market - Stay in a luxury hotel

The Inn at the Market

The Inn at the Market is a top rated luxury hotel located right at the Pike Place Market.

Affordable Lodging at the Market

If you are on a tight budget

If you are looking for funky and inexpensive lodging, The Green Tortoise Hostel is on Pike Street less than a block away from the main entrance to the Pike Place Market.