It's a building that has been standing in the city of Pittsburgh since 1764. At that time, it was used as a way to reinforce the defenses of Fort Pitt. The Fort Pitt Block House is all that remains from one of the largest fortifications in North America. When it was first constructed most of the walls and ramparts of Fort Pitt were made of sod bricks. It was very sound construction and able to withstand an attack from a cannon. The construction of Fort Pitt was completed at the end of 1761.

One of the concerns for the placement of Fort Pitt was the chance of flooding. It was constructed where the Monongahela and Allegheny Rivers join to form the Ohio River. In 1762, flooding occurred and caused serious damage to Fort Pitt. The sod work done during the fort's construction was washed away. The fort was repaired, but in 1763, there was another major flood causing even more damage. The area would not see such serious flooding again until the 1930s.

During the French and Indian War, the British promised the native American Indians they would leave the area where Fort Pitt was located. During 1760, the threat to Fort Pitt from the French was over. The Indians saw the British building colonial settlements around the area. The British had promised the Indians this would not happen. The Indians were then prevented by the British government from obtaining certain items during trading such as muskets, ammunition, and rum. This added to the reason for Pontiac's War in 1763. Attacks on Fort Pitt started in May of that year, and the fort was under full siege by June. It lasted until August of 1763. It was the worst attack experienced by Fort Pitt. A detachment of British soldiers was sent to relieve the soldiers at Fort Pitt. On their way there, the detachment fought a battle with the Indians at a location east of the fort known as Bushy Run. After winning this battle, the siege against Fort Pitt was over.

After the siege and the floods, Fort Pitt was not in good condition. Repairs were made between 1762 and 1763. Work was done to strengthen the walls, but the British military provided very little assistance. The fort's deterioration continued. Eventually, help did arrive. The fort would have new construction, and three redoubts or block houses were constructed. It is estimated it was completed in January of 1764. At this time, five redoubts were constructed at Fort Pitt. One of these original buildings is still standing in the city of Pittsburgh and is known as the Fort Pitt Block House. It was built directly in front of Fort Pitt facing the Ohio River.

The Fort Pitt Block House is made of wood, stone, and brick. It is a two-story structure. Each floor has a series of gun loopholes. They are located around the structure and were able to give soldiers in the Block House a 360-degree view of the area. This helped them to protect the fort on all sides. Should an attack happen on Fort Pitt, the Block House and other redoubts were the first line of defense. Soldiers could shoot their muskets through the gun loops. During its history, the Fort Pitt Block House has never been torn down, totally rebuilt or taken to another location. Much of the bricks, timbers, and stone that make up the Block House is from its original 1764 construction.

Daughters of the American Revolution

Fort Pitt was abandoned by the British in 1772. The Block House was then utilized as a trading post. During the Revolutionary War, Fort Pitt was used as a headquarters for the Continental Army. After the war, the United States Army made the decision to dismantle Fort Pitt and have a smaller garrison stationed in the area. The current Block House was not demolished because it was being used as a private residence. In 1894, the deed to the Block House was given to the Daughters of the American Revolution (DAR) by philanthropist Mary Schenley. She stipulated they were to preserve and keep the Block House as well as all history and tradition associated with it.

There was a condition report performed on the Fort Pitt Block House in 2011. In 2012 the report caused some concerns about the structural strength of its walls and masonry foundation. The condition of its timbers was also a concern. The Fort Pitt Society launched a restoration project in January of 2013. It lasted for ten months. The first thing that was done was the repair of the gun loop timbers from the original 1764 construction. Rotted portions of the timbers was replaced with white oak taken from a barn built in 1830. The few replacement sections were stained to match the color of the original wood. The next step was extensive masonry restoration. The materials used were an exact match to mortar used in 1764. Period specific braces were constructed and installed. All cracks in the beams were repaired. The reinforcement made it possible for several people to safely move about the upper and lower areas of the Fort Pitt Block House. The restoration was completed in time for the Fort Pitt Block House 250th anniversary in 2014.

The Fort Pitt Block House remains privately owned and operated by the DAR and Fort Pitt Society. These organizations get no state or federal funding. The goal is to keep the Fort Pitt Block House open to the public as it has been since 1896. It is the only structure left from the earliest history of Pittsburgh. It is listed as a National Historic Landmark. 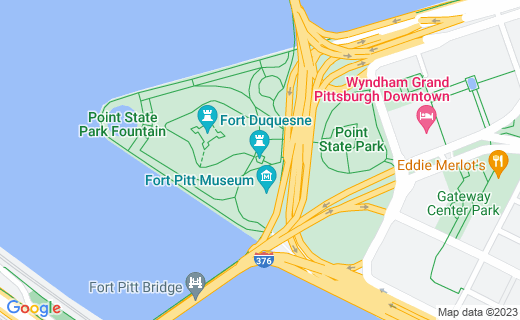