The stunning gem known as the Hope Diamond is on display at the National Natural History Museum in Washington D.C. A curator from the Smithsonian described it as priceless and irreplaceable. It has been insured for hundreds of millions of dollars. The necklace that contains the Hope Diamond is estimated to be worth over a million dollars by itself. There is a myth about the diamond that it is cursed. It brings tragedy and misfortune to all who wear it or own it. The Hope Diamond was mined in India. It has had many different owners in Britain, France as well as the United States. It has been put on display several times in different countries. Many experts believe the Hope Diamond is the most recognized gem in the world.

The Hope Diamond was removed from the Kollur mine in what is now known as modern India. The legacy of the stone that would become known as the Hope Diamond started when it was obtained by Jean Baptiste Tavernier. He was a French merchant and traveler who possessed the diamond in the mid-1600s. It was over 112 carat at the time. King Louis XIV of France purchased the diamond from Tavernier in 1668. The stone was recut in 1673 into a 67 carat stone. It was made into ceremonial jewelry in 1749. It was stolen during the French Revolution after King Louis XIV and Marie Antoinette attempted to flee France. It then came into the possession of King George the IV of England. At his death in 1830, King George was in such debt the Hope Diamond was sold. The next owner in 1839 was a gem collector known as Henry Philip Hope. This is who gave the diamond its name. It was sold to Pierre Cartier in 1909. It was purchased in 1911 by Mrs. Evelyn Walsh McLean of Washington D.C who owned in until she died in 1947. All the jewelry from Mrs. McLean's estate was purchased in 1949. For the next decade, the Hope diamond was part of many different exhibits. It was donated to the Smithsonian Institution in 1958. The Hope Diamond has always been a huge museum attraction.

Legend has it that Jean-Baptiste Tavernier actually stole the gem that would become the Hope Diamond from a Hindu state. Once it was discovered missing, a curse was put upon it by a Hindu priest known as a pujari. It was to bring death and misfortune to all who possessed it. Here are a few of the personal tragedies believed to be associated with the curse of the Hope Diamond.

He purchased the diamond and had it recut in the 1670s. It was then referred to as “The Blue Diamond of the Crown.” King Louis XIV and Marie Antoinette were beheaded during the French Revolution. All of his legitimate children died in childhood with only one exception.

He was a Dutch jeweler. He recut the diamond. Fals was robbed and murdered by his own son who ended up committing suicide.

He had to have his leg amputated after an accidental shooting. He ultimately went bankrupt in 1902 and was forced to sell the Hope Diamond.

He was a Turkish sultan who owned the Hope Diamond for only a short period of time. His army revolted and toppled him from his throne in 1909.

He was a Greek merchant and stockholder when he obtained the Hope Diamond. Shortly after purchasing it, he died in a car accident. Simon Maoncharides drove his car over a cliff killing himself as well as his wife and child.

She was a wealthy heiress who purchased the Hope Diamond from Pierre Cartier. She would not only wear the Hope Diamond herself but let her dog wear it on his collar. Her mother-in-law died shortly after the diamond was purchased. McLean's son passed away when he was 9 years old. Her husband left her to be with a younger woman. Her husband was also later declared legally insane and committed to a psychiatric hospital. McLean's daughter then died of a drug overdose. She eventually accumulated so much debt that she had to sell the Washington Post to cover it. When Evelyn Walsh McLean passed away, she owed quite a bit of money to many people. Her children sold the Hope Diamond to a jeweler named Harry Winston to help cover her debts. Winston put it in a plain brown wrapper and sent it by registered mail to the Smithsonian in 1958.

Representatives from the Gemological Institute of America (GIA) visited the Smithsonian in 1988 to grade the Hope Diamond using modern techniques. They noted it has a very strong phosphorescence, which is the emitting of light after exposure to a small electrical charge. It causes a gem to glow with different colors. It was described by the GIA as being a profound dark grayish-blue color. During this time another examination was conducted by a gemologist using an advanced colorimeter. It showed the Hope Diamond to have a slight violet component that is not visible to the naked eye.

After being donated in 1958, the Hope Diamond has spent most of its time at the National Museum of Natural History. It has only been put on display in other places a few times. The Hope Diamond was taken to the Louvre in France in 1962. It was also put on display at Johannesburg, South Africa in 1965. It even spent some time with its former owner Harry Winston. In 1984, the Hope Diamond was taken to Winston's home in New York City for a period of time. It was once again at Winston's home in 1996 to celebrate a 50th anniversary. It is currently on display at the National Museum of Natural History in Washington D.C. as part of the jewelry gallery. 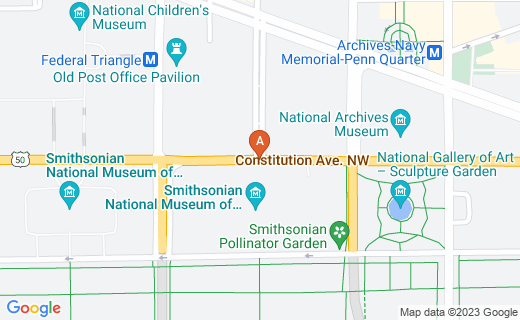 The Hope Diamond: Evalyn Walsh McLean and the Captivating Mystery of the World's Most Alluring Jewel
Buy Now