The Udvar Hazey Center is a part of the Smithsonian museum collection. It is the second Air and Space Museum in the Washington D.C. area. This museum focuses on aircraft and their evolution through history while the museum in D.C. is quite heavy on spacecraft.

The museum is a short dive, about thirty minutes, from Washington D.C. Located on the grounds of the Dulles Air Port the museum has the perfect backdrop. Guests can watch planes take off and land from the ground as well as from the museums replica air traffic control tower. It really puts guests into the ambiance of the entire museum and sets the tone for the visit.

The museum itself is broken up into sections so that the aircraft are grouped into specific uses and when they were used. The World War II planes are all together. The commercial planes are together. There are even hot air balloons! It is so cool to be able to compare the modern day aircraft with the old World War II fighters and crop dusters. You can really see how far we have come in terms of technology and design for air planes.

The newest section of the museum is the restoration hanger. Guests can watch as planes and spacecraft are brought back to their original glory. Its kind of like watching very slow magic. It is right next to the NASA wing where guests are able to see dozens of different spacecraft.

If you are looking for a little more excitement in your trip you can watch planes land and take off from Dulles Air Port from the air traffic control tower. There is even a mock air traffic control panel where guests are able to see what it takes to run a busy air port. The IMAX theatre shows educational documentaries as well as some of the latest movies.

Typically, we take a couple of hours walking about the museum floor. But, we do spend time reading the informational plaques. All in all you can send an entire day at the museum with everything there is to do. The museum entry is free, which is absolutely amazing. You just need to pay for parking, about $15 per car. However, you are go after 4pm the parking is free. I would imagine if you have young children that just want to run around and look at air planes, but not spend too much time reading about them, this might be the best option since a trip, for them, wouldn't be too long.

Where Is The Museum? 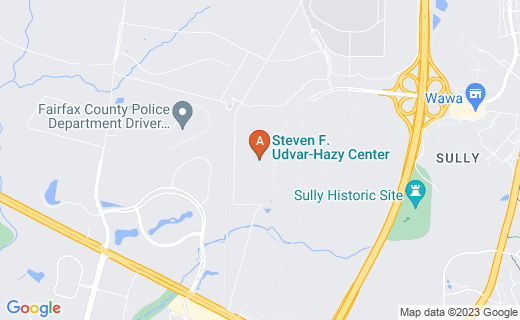 The second of two Smithsonian Air and Space Museums in the Washington D.C. area.

Have you ever visited a Smithsonian museum?

This article is focusing specifically on the Udvar Hazey Center, so I won't go in to too much detail on the other Smithsonian. I will say that they are all worth seeing. Even if airplanes and spacecraft aren't your cup of tea chances are at least one of the museums in D.C. will have something that will interest you.

The vast majority of the Smithsonian museums are in Washington D.C., with the exception of the Udvar Hazey Center and a couple of museums in New York. Nearly all of the D.C. museums are located along the National Mall. This means they are near the monuments, White House, and the Capital building. What is even better than this? They are free. That's right. If you can find a place to park (I'd suggest taking the metro when at all possible since finding parking in D.C. can be challenging) you can get in to the museums for free.

Some of the highlights of the other Smithsonian museums include: the Hope Diamond, the rugby slippers from the Wizard of Oz, and the fossilized skeleton of the Tyrannosaurs Rex.

If you want to try this interesting treat for yourself you can! You don't even have to make a trip to the museums of D.C. There are millions of products on Amazon.com and astronaut ice cream is one of them. They even have other options like strawberries and grapes. You can get individual flavors of ice cream or a variety pack to try them all.

If you are like me then you love a good souvenir shop. And I don't just mean some dinky little shop haphazardly thrown together with a bunch of cheap kids toys and key chains. I'm talking about stores that have been well thought out and have a wide variety of trinkets and products that people will actually want to take home or give to their friends.

The Smithsonian museums have amazing gift shops. The shop at the Udvar Hazey Air and Space Museum is no exception. There are models of the highlight attractions: the SR-71, the space shuttle Discovery, as well as various military and commercial planes and helicopters. I know my boyfriend was super excited to get a little model of the SR-71 for his desk at work.There are dozens of different books ranging from coloring books for children to memoirs from pilots and the scientists that created these amazing aircraft. Of course there are the keychains and shot glasses that every gift shop has, but there is also snacks. No just any snacks. Astronaut ice cream. You heard me right.

Now, I grew up in the Washington D.C. area. We had field trips to the various monuments and museums every year. I remember trying astronaut ice cream as a child. I also remember hated it. But, I thought that everyone had tried it when they were young. But, when my boyfriend told me he had never had it I knew I had to buy a bag, just to see his face when he tried it. Surprisingly, he like it. So did I. And so did the rest of my family that tried it. So, why did I have the change of heart? Most likely because 10-year-old me was expecting, well, ice cream. Cold, smooth, creamy, and satisfying. Well, its freeze dried ice cream so it is almost none of those things. When you think about what it is and then eat it, I found that it was much more enjoyable. 27-year-old me was able to appreciate that it tasted just like mint chocolate chip ice cream, it just wasn't cold or very creamy.

That being said I think it is defiantly worth checking out the gift shop. I also think its worth buying a bag of your favorite flavor of ice cream and giving it a try. Its a fun snack and kids will love getting to try food that real astronauts eat in space. I really think there is something for everyone, especially if you or someone you know has a passion for the sciences.

Have you ever wondered how large the space shuttle actually is? Well, wonder no more. The Udvar Hazey Center is proud to have the Space Shuttle Discovery on display as the main attraction for the NASA wing of the museum. It is massive.

Not only can you see the space shuttle up close you can see satieties, rockets, and various other space artifacts. You can even see old computers and control panels from NASA.

It is no secret that the staff of the Udvar Hazey is very proud of their collection. If it safe to say that the crowning jewel of the collection is the SR-71 Blackbird. And considering it is the fastest aircraft that has ever been built and that despite all of the missions it carried out over hostile territory no one has ever shot down a blackbird. Why? Well, because it was built as the ultimate stealth plane and it is the fastest thing in the world. To put it in to prescriptive the protocol for when the plane was fired upon by missiles was simple: out run the missile.

The specific blackbird at the Udvar Hazey center has set many records. On the day of it's last flight it broke several speed records on its journey from Edwards Air Force Base (that's in California for those of you that don't know) to Dulles. The entire flight took 67 minutes and 54 seconds. That is fast. Incredibly fast.

If you want any more information about the SR-71 just ask one of the many friendly docents. They will be more than happy to tell you anything they know about this amazing aircraft and any other aircraft you are interested in.