The seeds of Shaker Heights’ unique light-rail rapid transit system lay in the 1906 acquisition of land intended for a new planned suburban community by the visionary Van Sweringen brothers. As the planned suburb lay a considerable distance from the heart of Cleveland, the Van Sweringens recognized the need for a connecting streetcar system.

Their Village of Shaker Heights (with but 200 residents) was incorporated in 1911, and within two years the first mile or so of their newly created Cleveland Interurban Railroad began service. By 1928, considerable additional portions of the light-rail streetcar line were operating, as much of Shaker Heights was being developed and as new residents continued to arrive.

In 1930, the Van Sweringen’s new Cleveland Union Terminal opened at Public Square, immediately beneath their new and imposing skyscraper, the Terminal Tower. Shaker’s rapid transit line was at last connected to the very heart of the city.

Today, Shaker Heights’ rapid transit system operates as two components of the Regional Transit Authority’s larger city-wide system: the Blue Line and the Green Line. Both lines follow the same right-of-way from Public Square and the Terminal Tower southeast to Shaker Square. The Blue Line then continues eastward within the median of Shaker Boulevard through this leafy suburb of grand homes. The Green Line diverges past Shaker Square, heading southeast within the median of Van Aken Boulevard through more southerly residential areas and past apartments and commercial districts.

The Shaker rapid transit system is distinctive in its incorporation of light-rail streetcar-style trains within tree-lined boulevard medians, and its use of grade crossings, with easily accessible low platforms, at suburban streets. As a result, the transit system is made quite handy and useful to surrounding residents, guaranteeing its popularity and substantial ridership. 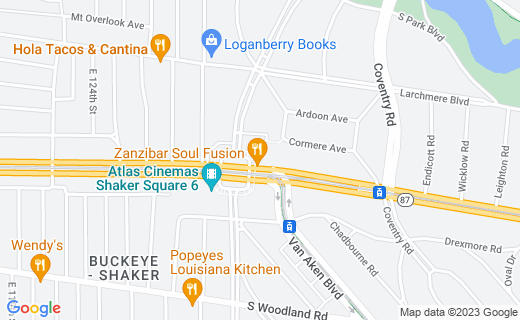