Erected in 1979, St. Clair Place in downtown Cleveland is one of the city’s central apartment facilities for elderly subsidized housing. This 14-story high-rise structure was designed by the local architectural firm of Richard L. Bowen and Associates of Shaker Square. Lead architect on the project was George W. Zimmerman, assisted by both architects Rick Zimmerman and Pen Zimmerman.

Standing high along the westerly flank of East 13th Street between St. Clair Avenue and Rockwell Avenue, this structure became the tallest load-bearing-wall cast-in-place concrete structure in the city. . The tower’s end and intermediate walls were slip-formed of continually cast concrete, while the floors and roof consist of pre-cast, post-tensioned, hollow-core concrete planking. The building is in rough alignment with some of the many other high-rise slabs — Reserve Square, Bohn Tower, Charter One Bank, The Chesterfield, etc. — forming the eastern limits of Cleveland’s downtown core.

The bulk of the 13 upper floors of St. Clair Place provide 1- and 2-bedroom apartments for the poor elderly, fully compliant with HUD and Federal Section 8 housing standards. The main floor, with a central entrance on East 13th Street, is given over to lobby, lounge, common facilities and offices. At the tower’s northern end is a passive-recreation green space adjacent to the street frontage. Parking for the facility is provided in a two-level structure accessible from Rockwell Avenue.

St. Clair Place is one of a number of Federally-subsidized Section 8 housing facilities throughout the immediate vicinity coordinated by the Cuyahoga Metropolitan Housing Authority. 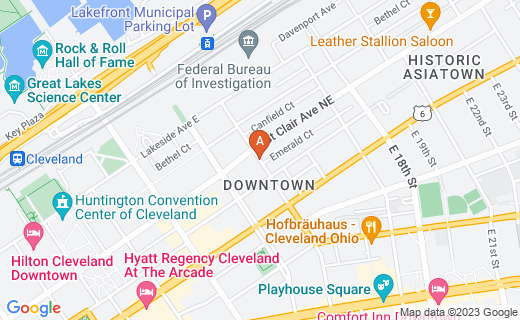