Taborno is a mountain village in Tenerife North

Taborno is a unique mountain village

Taborno is situated in the Anaga Mountains in the extreme north of Tenerife.There is one restaurant and bar, tiny church and square and some Canary Islands traditional cottages and houses and that's it.

The focal point of the village for sight-seers is the unusual Taborno Roque that towers above it and can be reached along footpaths. The Roque de Taborno is often called the "Matterhorn of Tenerife", making reference to its shape.

Its remote location overlooking valleys and sea has kept the area well-preserved when it comes to natural habitats and it is surrounded by evergreen laurel and heather forests.

Taborno is a botanist's and naturalist's paradise with the many rare flora and fauna that can be found on the mountainsides, cliffs and in the woodlands.

The Anaga Mountain range is above the University City of La Laguna and includes the green forested area of Las Mercedes which extends over to Pico del Ingles, Cruz del Carmen and El Bailadero, with the remote villages of Taganana, Almaciga and Benijo on the coast.

Taborno is between the neighbouring mountain villages of Las Carboneras and Afur, giving it a wonderful view over the spectacular countryside that surrounds it.

There are winding mountain roads and footpaths but most of the villages are small and may not even have a single shop. Most have a bar or restaurant though.

The high altitude of the mountains and cliffs that reach as high as 1,000 m, as well as the lack of main roads and motorway have kept the areas undeveloped to a large degree. Much of the forest in the Anaga mountains is as has it has been for hundreds of years.

This "laurisilva" forest, as it is known, is made up mainly of evergreen trees such as the Canary Island Laurel (Laurus azorica), the Buckthorn (Rhamnus glandulosa) and Canary Island Holly (Ilex canariensis).

Rare endemic wild flowers such as the white-flowered Sideritis macrostachya grow around Taborno and in other parts of the Anaga range. The rocks and cliffs in the area are covered in yellow and grey lichens and many succulent plants such as species of Houseleek (Aeonium spp ) grow on them.

The diversity of wild flowers you will find around the village of Taborno is amazing and the area is especially beautiful in spring when plants like the Canary Island Bellflower (Canarina canariensis) and the yellow-flowered Canary Island Sowthistles (Sonchus spp) are in full bloom.

The forest is often shrouded in misty clouds and these provide the life-giving moisture that the trees trap by condensation on their leaves. Many ferns, mosses, lichens and wild flowers that like damp and shady habitats grow well in and around these forests.

An information plaque explains in Spanish that a stream in the nearby ravine of Afur provides water all year around and is one of the only places where Tenerife's only freshwater fish that was not introduced lives. That fish is the Eel.

Because it is high up Taborno can get quite chilly at times and winds will make it colder still so it is a good idea to have suitable clothes if visiting the village.

There is a TITSA bus service number 075 from La Laguna and back but there are only six buses per day. The only other way to get there is by car, taxi or on foot.

Taborno is, however, one of Tenerife's real jewels of the countryside and is well worth making the effort to see. 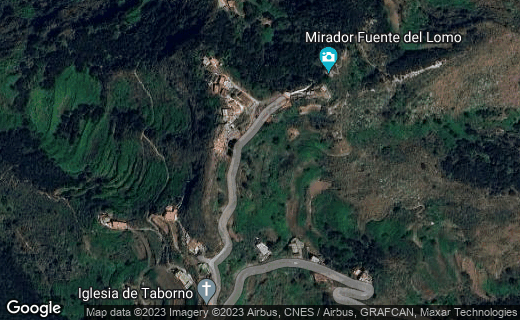