Tenerife South Airport is first stop for many

Tenerife’s Reina Sofía Airport, which is commonly referred to as Tenerife South, is where most tourists arriving on the island touchdown. The south of Tenerife is many holiday-makers’ first choice of a destination in the Canary Islands.

There are many reasons why Tenerife South is the favourite part of the island for tourists. The main one is probably because this is the part of Tenerife where you are more likely to get sunshine all year around, and, of course, sunbathing is what most holiday-makers like to do.

Have you enjoyed a holiday in the south of Tenerife?

The south of Tenerife is where most of its resorts sprang up and development in the tourist sector is mainly focused. The very popular resorts of Los Cristianos and Playa de las Américas are neighbours on the coast of Tenerife's south.

Of course, these places have their own sandy beaches, as well as plenty of bars and restaurants and shopping centres too. These resorts offer everything most tourists are looking for when on holiday.

All visitors to the island will need somewhere to stay and before they get to Tenerife they will have found appropriate Tenerife accommodation. Some tourists, who can afford it, will prefer to stay in hotels, however, an increasing number are choosing self-catering holidays in Tenerife apartments. There are plenty of these available in the resorts of Tenerife South.

Further along the coast from Las Américas there are more areas that are focused on providing everything the modern tourist could want. Puerto Colón, Fañabe and Torviscas are three more resort areas, whilst up the coastline again are Callao Salvaje and Playa Paraíso.

Los Gigantes has its own marina where you can join an excursion by boat that will take you up the coast past these cliffs, and you will be able to do some whale and dolphin-spotting. You might even see some flying fish.

Tenerife's tourist resorts in the south of the island offer plenty of entertainment in the bars and clubs, with cabaret, comedy and live music most evenings and afternoon sessions in some places too, especially on Sundays. There is so much to do and see by day and lots of nightlife to enjoy as well.

El Médano, which is where all the wind-surfers gather, is on the southern coast too. This resort town has one of the best sandy beaches on the island, and also has the interesting volcanic cone known as Montaña Roja (Red Mountain), which can easily be seen from Tenerife South Airport.

Next to El Médano is the fishing village Los Abrigos where some of the best restaurants for fish dishes can be found on the whole island.

El Médano and Los Abrigos are both right by the Golf del Sur area too, which, as its name suggests, is where all the golfers go.

Las Galletas, a fishing village turned resort town, is also in this section of the south of Tenerife and it boasts its own marina.

Tenerife's South has everything tourists are looking for. It has the sunshine, the beaches, the bars, the restaurants, the shops, the sporting facilities like the golf courses, and is within easy reach of the airport. The resorts all have an excellent bus service too making travel to other parts of Tenerife a simple thing to do.

It is not surprising that so many people choose Tenerife South as their first choice of holiday destination in the Canary Islands. 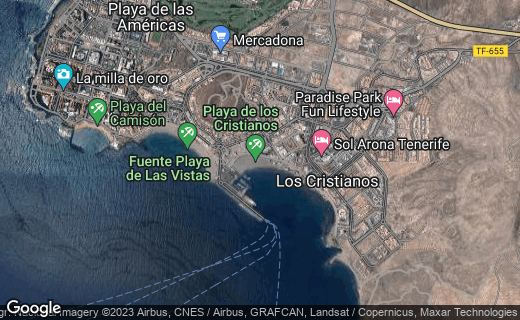