Punctuation of the 1903 Group Plan

Set within a placid and passive pedestrian space in the heart of Cleveland is “The Fountain of Eternal Life”, a nearly 50-foot tall dynamic sculpture commemorating the region’s war dead. The location and design of this monument serve as a punctuating focal point within the cityscape, as pre-ordained by the Classical organization of buildings and public spaces envisioned by Cleveland's Group Plan of 1903.

Variously referred to locally as “Peace Arising from the Flames of War” or simply "The War Memorial", this monument occupies a central position within an enclosing pool, ringing fountain sprays, and the grass-framed plazas of Mall A. Bounded by St. Clair Avenue, Rockwell Avenue, West Mall Avenue and the former grounds of the Cleveland Board of Education (since converted into The Drury Hotel), Mall A sits atop an underground parking garage that serves the adjacent Key Center, comprised of soaring Key Tower, The Marriott at Key Center and the historic Society for Savings Building.

Rising tot a total height of 46 feet from pool surface to the fingertips of the central figure's outstretched right hand, the central sculpture of the monument represents man, swathed in the flames of conflict and strife, arising from a tangled sphere of the world’s prejudices, hatreds and superstitions. The striving, reaching figure faces Lake Erie down the considerable length of Cleveland's Mall C, it’s upturned face, arching back, and strenuous lunging grasp seeking eternal peace. Additional carvings of granite set within the fountain pool to the four sides of the primary figure represent the various civilizations and cultures of the world that engender continued strife and conflict across the ages.

“The Fountain of Eternal Life” was sculpted by Marshall Fredericks, a graduate of the Cleveland Institute of Art, and was initially dedicated in the late spring of 1964. Initially funded by donations from local citizens and civic organizations — and heavily promoted by The Cleveland Press, then Cleveland’s daily afternoon newspaper — the sculpture initially bore the names of several thousand area military personnel who had died in World War II and the Korean War. These were etched into bronze panels applied to the granite perimeter of the fountain pool. 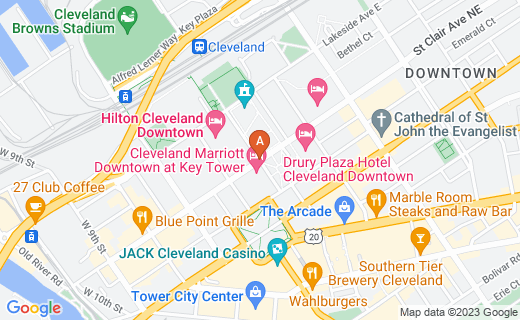 Enjoy the broad green expanse of downtown Cleveland's Malls A, B and C.

The monument has since been rededicated twice, first in 1991, and again in 2004. Those rededications commemorated the addition of a substantial number of the city's war dead from both prior and later armed conflicts around the globe. “The Fountain of Eternal Life” is now dedicated to 5,516 Cleveland-area veteran casualties of The Spanish-American War, World Wars I and II, The Korean Conflict, the Viet Nam War, and Gulf Wars I and II, from all of the nation's armed forces branches.