Austria in the Fall

On a crisp fall day in November, we drove through the Western part of Austria on our way to Germany. The autumn leaves were amazingly brilliant as though they were boasting just for us.

Even though the country is landlocked, the landscape includes great natural beauty from the Eastern Alps to lush forests and valleys. It is a favorite destination in the summer for musical festivals and in the winter for skiing.

Austria is known for ancient castles, monasteries and a few well-preserved medieval cities such as Salzburg, home of Mozart and other musical geniuses.

What an opportunity to learn more about some of the world's most famous and experience so much culture and tradition. The city is divided in two parts, the right and left bank of the River Salzach. The older part is on the left bank, dating back to Roman times, and can be accessed by several bridges.

We were with four of our grandchildren who kept the trip lively and never boring. The city is very family friendly and offers something for young and old. Of course, for most of us, it conjures up memories of The Sound of Music. 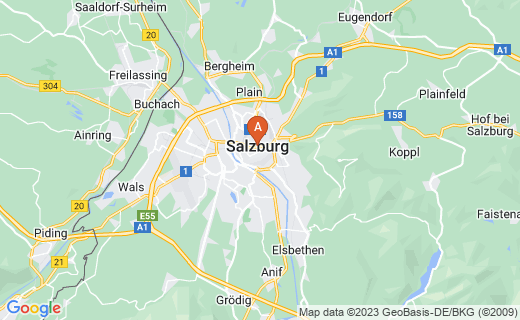 A medieval fortress, the Festung Hohensalsburg, hovers over the city from a hilltop. It dates from the 11th century. You can ride up the steep incline to the castle on a railway. It housed prince archbishops who sought refuge during the Hungarian and Peasants’ War in the 16th century. It claims to have never been conquered by enemy troops.

Have you been to Austria?

The Salzach River flows through Salzburg. There is a bridge spanning this river which attracts couples who want to lock their love, literally. They engrave or scratch their names or initials on a lock and attach it to the fence of the bridge before throwing the key in the river. They have declared their eternal devotion for the world to see. Just for a moment, I thought how romantic this place was (the Makartsteg Bridge) and of all the couples it represented.

After crossing the bridge, we headed to the vast courtyard and the proclaimed birthplace of Mozart. It is also called the Getreidegasse.

Narrow roadways accommodate tourists and motorcyclists as they make their way through the town. There are numerous shops with a variety of souvenirs. My favorite were little Mozart puppets.

The Residenz is early Baroque built for Archbishop Wolf Dietrick von Raiteneau, who made it his home in 1587. There is a collection of European art from the 16th to 19th centuries. Many of Salzburg's prince-archbishops lived and held court here.

Highly ornate cathedrals with heavenly domes are plentiful in Salzburg. The architecture of the city is very impressive. We strolled down the slender walkways to peek in small shops filled with treasures. We discovered that most people in Austria speak German. Of course we had to sample a few of the pastry and tasty delicacies along the way.

One of the newer highlights in Salzburg’s includes their Cathedral Quarters with 2,000 stunning exhibits and covers 15,000 square meters. You can capture impressive views of the city during the tour where history comes alive.

There is a rich heritage of religion as seen in St. Peter's Abbey and Benedictine monastery, which dates from AD 700 and the Cathedral (Dom) designed by Santino Solari in 1614. Also, the Franziskanerkirche boasts a splendid altarpiece by Johann Bernhard Fischer von Erlach with a splendid Baroque altarpiece from 1709.

Several museums in Salzburg offer interactive exhibits and educational programs, fine arts as well as historical collections. They include the Salzburg Museum, the Haus der Natur and Mozarts Geburshaus where you can view an audio-visual display telling his story.

So Much to See!

Besides the cathedrals and museums, Salzburg has a science center, a reptile zoo and a natural history center featuring 30 aquariums.

Cycling paths will keep bikers happy for many hours. Thirteen lakes are located on The Salzkammergut-Radweg cycle path, one of the favorites.

The Mirabell Garden or Schlosspark Hellbrunn are two of Salzburg's expansively landscaped parks. Five mountainous peaks surround the city including the Gaisberg, Nonnberg, Kapuzinerberg, Mönchsberg and the Untersberg.

I am sure you could spend a few weeks in Salzburg and not see all it has to offer. I hope to have the opportunity to return again!